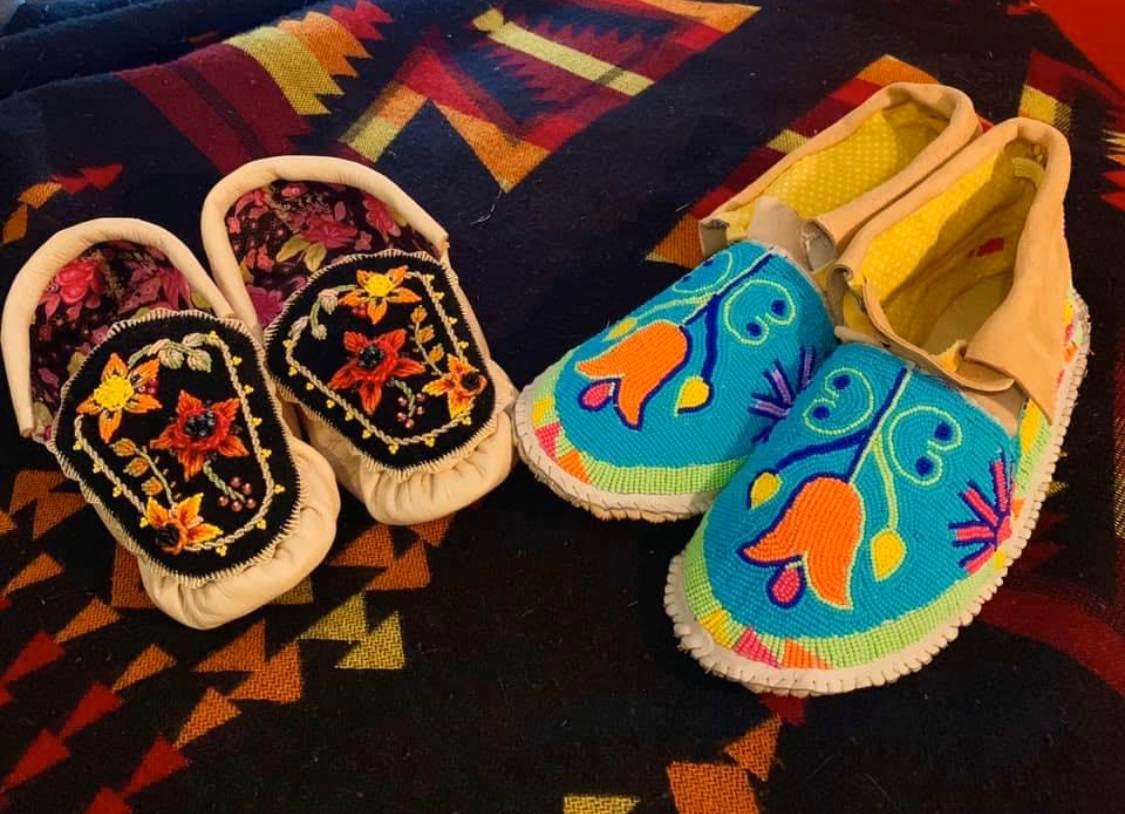 Onkwehón:we across Turtle Island rocked their moccasins last week as part of Rock Your Mocs week to celebrate Indigenous pride – and shoewear.

“Rock your Mocs is solidarity with all First Nations, and I’ve posted mine every year since the first time I saw it on Facebook,” said Kahnawa’kehró:non Kawennotas Sedalia Fazio.

Fazio said she posts a photo of each pair of moccasins she owns every day during Rock Your Mocs week, until she runs out of pairs to post.

“I wear nothing but mocs and have been most of my life,” she said. “For me, wearing my mocs means walking softly on Mother Earth.”

“I feel that it’s really important for us to get the opportunity to Indigenize our clothing,” said Don Barnaby, powwow dancer and co-founder of Healing Stitches. “Everybody should be wearing moccasins so that people know that we’re still here.”

Rock Your Mocs started in 2011 as a single day, November 15, when Onkwehón:we took to social media to post photos of themselves and their moccasins as a way to show pride in their heritage and increase visibility for Indigenous cultures.

Ten years later, it’s grown into a whole week and is a popular event to participate in online – all you have to do is post a picture with the hashtag #RockYourMocs2021.

Barnaby said that for him, every day is a day to celebrate being Indigenous by doing ceremonies and wearing clothing that connects him to the culture. But during Rock Your Mocs week, there’s even more of a reason to celebrate.

“It’s important for me, like especially when I’m dancing, to be able to feel Mother Earth. It’s really a way for me to connect,” he said.

He owns a few pairs to match his regalia, and the pair he wore while speaking to The Eastern Door was gifted to him by his wife, along with a matching headband and belt.

“This winter, I’m going to create an outfit to match all those,” he said. “It’s a way of honouring her thoughtfulness, of knowing that she always wants me to look at my finest.”

The day after, he planned on wearing a pink pair beaded by his wife.

“She made them for me for Christmas a couple of years ago. It was the first time she ever attempted beading, and they’re really, really beautiful,” he said

“The only time she ever attempted to do beading was to bead the pair of moccasins. And to me, that’s such pure love.”

Rocking Those Mocs: Respect vs Cultural Appropriation was a discussion centring Indigenous voices that focused on the significance of moccasins in Indigenous cultures, as well as if and how non-Indigenous people can respectfully wear cultural clothing like moccasins.

“For the Anishinaabe people, our moccasins are a really important part of transitioning from a baby into a child,” said Niin. “That moment when we first touch the Earth, that’s when we get our first moccasins.”

Phillips talked about how moccasins do not restrict the feet the way Western-style shoes do.

“The leather is from animals that sacrifice their life to allow you to have something to protect your feet, so it also creates a link to the natural world,” she said.

Charron-Einish noted with a laugh how she could tell just from the moccasins what nations the two other speakers are a part of.

“These are all unspoken stories. It’s different ways of telling stories,” she said.

When discussing non-Indigenous people wearing moccasins, the speakers agreed that if the shoes were purchased directly from an Indigenous person who made them, especially custom-made, they felt it was not culturally appropriative.

“Appropriation is more the mass market, where capitalism is eating it up,” said Phillips. “Like how you can walk in Winners and see moccasins. When you see that, it loses the whole meaning behind what goes into a moccasin.”

The speakers also noted that they felt the same about items like beaded earrings, which are also a cultural item of clothing that does not have an inherently sacred purpose. But buyers should be suspicious of any products sold that are marketed as being sacred, regardless of what the seller claims their heritage is.

“At least in our culture, there’s teachings of generosity, to share parts of who we are, and those things (moccasins and earrings) are definitely open for appreciation,” said Niin.

“Wearing our moccasins, wearing things that represent who we really are, what our spirit looks like, how we’re related and connected to one another,” Niin said, “that’s why rock your mocs is a thing: to promote that it’s okay to be beautiful and be Indigenous.”