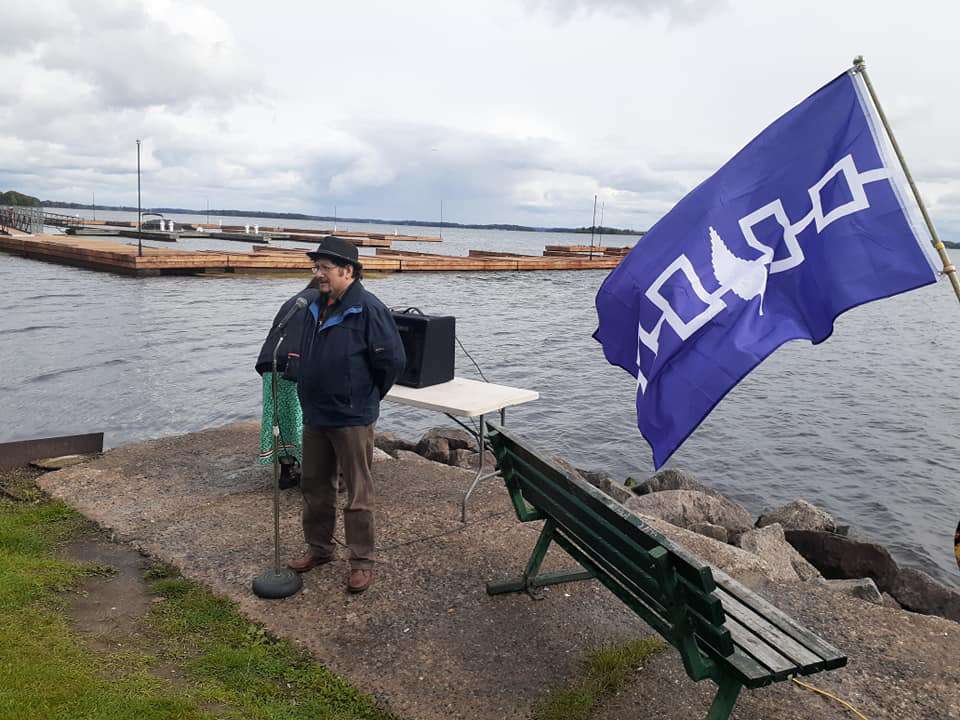 In Gananoque, Ontario, the creation of a town council-led Indigenous circle to spearhead projects relevant to Onkwehón:we has caused a stir within the community.

When the First Peoples Circle submitted its proposal over a year ago, its request was to have the authority to design and name the park. So, when Saylor and the others in the circle learned that the town council was creating its own circle with control over the park, tensions boiled to the surface.

“The town council was invited to participate in the First Peoples Circle of the Thousand Islands,” said Frayne McCarthy, who is a part of the circle as an ally.

He said it was explained to the council that an Indigenous-led circle has existed for five years, this circle wants responsibility for the park, and the council should join this existing circle instead of creating its own.

“They did not want to do that. In my view, it’s a colonial abuse of power,” McCarthy continued.

Dennis O’Connor is a councillor for the town and chairs the newly-created Gananoque Indigenous Circle. He said that the reason the council decided to create a new circle that was led by the council was to facilitate the process of getting the park created.

“In municipal politics, there’s so much paperwork. There’s so much that has to be done. Not to mention funding, and naming, and putting the park there,” O’Connor said. “It’s very complex, so my job was to help them get what they wanted.”

After months of disagreement between the First Peoples Circle and the Gananoque Indigenous Circle over who gets to name and design the park, O’Connor said that the circle chaired by him will no longer be responsible for the park.

“It’s rather unfortunate this happened, but the town Indigenous group has no interest in getting in on this park,” O’Connor continued. “(The First Peoples Circle) will be working directly with the mayor, and hopefully it works for them.”

But that doesn’t mean the Gananoque Indigenous Circle will be dissolved. O’Connor said that the circle chaired by him, which he noted consists of all Indigenous members aside from him and another councillor, will remain in effect and will be spearheading projects relevant to Indigenous Peoples.

“What we want to do as a group is work towards education, hopefully, social services, and more for Indigenous people within our area. That, to us, is more important than a pile of rocks by the St. Lawrence River.”

O’Connor said that the town’s circle has created a podcast, will be organizing winter games, and is considering creating a different park that can accommodate more people than the First Peoples Park of the Thousand Islands.

But the town’s circle’s existence continues to draw the ire of the pre-existing circle, whose organizers believe that the new circle simply should not exist.

O’Connor said that though he is the chair of the circle, the projects they will take on will be those of interest to the Indigenous people in the circle. They will not dissolve the circle, but he said he hopes relationships with the First Peoples Circle can improve.

“I feel very bad about this, and I apologize if I upset anyone because it most definitely is not my intention,” said O’Connor.

Last Sunday, October 17, the First Peoples Circle held a naming ceremony at the waterfront park. Saylor spoke at the ceremony, among others, and discussed Kahnawake’s disrupted relationship to the waterfront with the opening of the St. Lawrence Seaway.

“Yes, it was a necessary transportation route, but there were alternatives. Why didn’t they put it on the Montreal side?” Saylor said. Of course, the answer is obvious, Saylor noted: it was deemed more important to preserve Montreal’s waterfront than Kahnawake’s.

The naming ceremony was one event in the fifth annual First Peoples Festival of the Thousand Islands held over the weekend. The festival is something the circle puts together every year to celebrate Indigenous Peoples’ cultures in the area, and this year’s them was “First, Now and Always.”

It began with a Friday night screening of Beans, the film by Kahnawa’kehró:non Tracey Deer telling the story of a girl’s coming of age to the backdrop of the Siege of Kanesatake (Oka Crisis).

On Saturday, Shannon Olivier and her daughter Migizi Mishkiki (Kiki) performed a mother-daughter connection dance and song as part of the festival.

“I grew up non-Native, I was adopted into a non-Native household at seven, so I had to find my journey back to learning my own culture,” Olivier explained.

“And then when I had my daughter, I just started to incorporate the language, incorporate all the teachings that I know from all the elders that I was given.”

“Even though I’m still learning, I’m still sharing it with her, and now she’s passing the torch. Now she can share, and she has been.”

Olivier is new to the First Peoples Circle, having started to participate in it this year. She said she was pleased to learn that such a thing has been around for five years now.

She spoke at the naming ceremony for the park on Sunday, noting that though the waterfront lookout point is manmade, it shows the resilience of nature as the grass and the water has taken it over.

“It kind of ties in with how we are here, no matter what event, what is thrown at us, we’re always going to be here, and we’re adaptable,” Olivier said.

Between a condo building and a luxury marina, one of the last undeveloped remnants of Gananoque’s waterfront, the First Peoples Park of the Thousand Islands now sits. A place of commemoration, and not just for those in the First Peoples Circle.