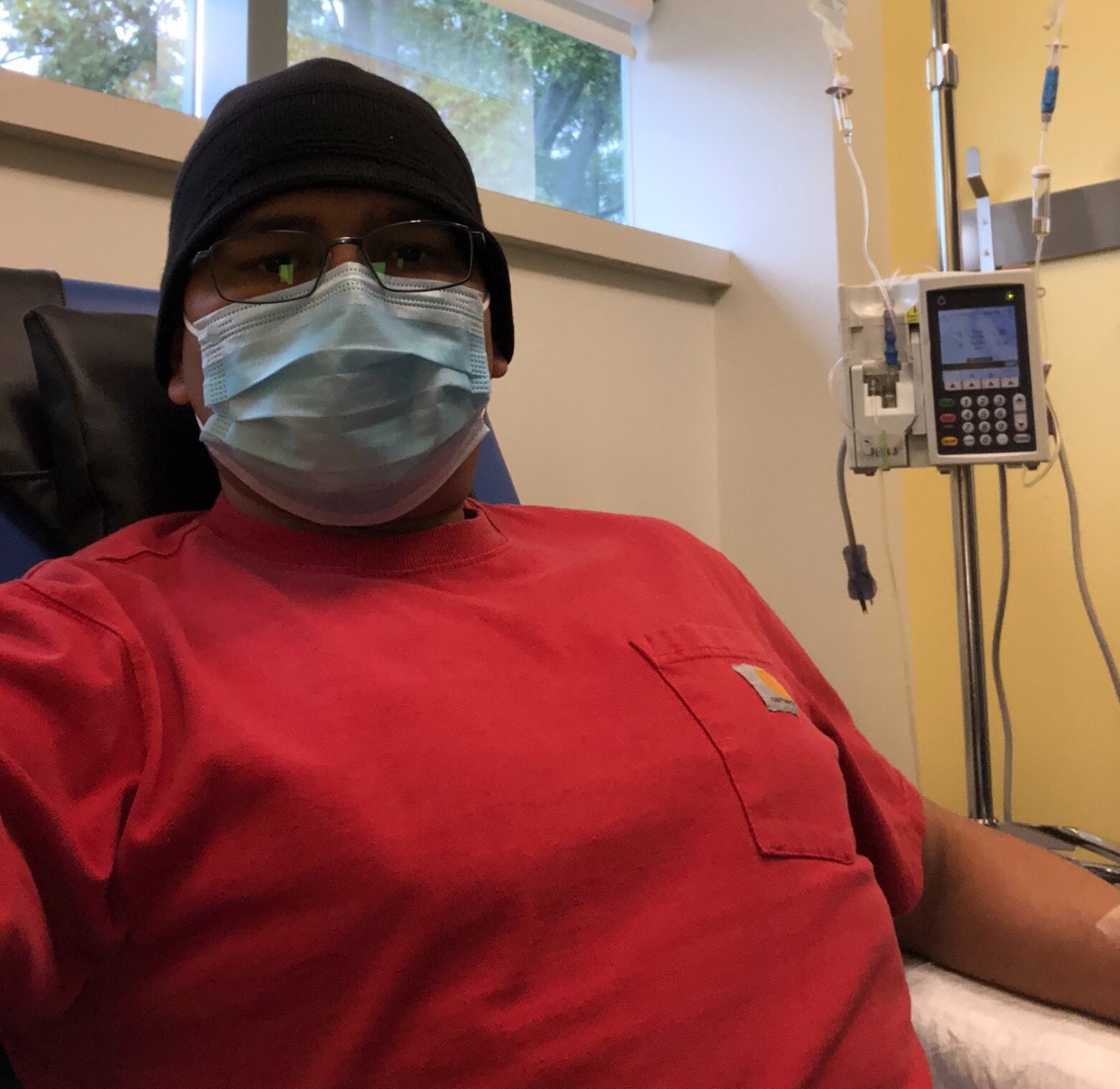 “Chemo treatment is the only option available for me for the rest of my life,” said Kory Cross, who was diagnosed with stage four colorectal cancer in March of 2019.

“Until the chemo stops working or it’s having an adverse effect on my body, at which point I have to stop the chemo and then the cancer takes over. It’s one or the other.”

When the gastroenterologist diagnosed Cross with cancer, he said his world was suddenly turned upside down and inside out. He was only 43 at the time.

Cross has been with his wife Samantha for over 20 years. The couple married in August of 2008 and share two children together, daughters Lynnen, 12, and Ivy, 8. Cross also has two adult sons, Randy, 25, and Shatekaronhiase, 20, from a previous relationship.

“It’s definitely a struggle on the whole family and the whole dynamics. And it is only now, after 30 months, that I
can recognize and identify the struggles,” he said. “In the beginning, it is like a hand grenade goes off, and everything is up and down and in and out.”

He said that it had taken a toll on Samantha because it’s a lot of weight for her to carry – thinking about the future, the children and the house.

The Kahnawa’kehró:non has rectal tumours and lesions on his liver and lungs. The cancer also spread to his fourth rib on the left-hand side, which is why the cancer is inoperable.

Since starting treatment in April 2019, he has completed 26 rounds of chemotherapy.

“I fight the chemo when I am in the chemo cycle. When I stop the chemo, I feel the cancer. And I feel it because I have
rectal tumours, which means I can’t go to the bathroom, which means I have pain,” said Cross.

During his interview with The Eastern Door, the father of four repeated that he has had to learn to speak in the present
tense because his situation fluctuates day-by-day and week-by-week.

“Right now, my main concerns are my hands and my feet. The chemo is deteriorating my skin. It is taking away layers of my skin, so my feet are pink and red, and they are bare,” he explained.

“And my hands right now, I am using Polysporin with gloves so that I can heal the skin because the cream doesn’t heal.”

To treat his stage four colorectal cancer, the 45-year-old goes through a three-week cycle: two weeks of chemo and one week of rest.

“Throughout my adult life, I have always had bowel issues. Maybe I wasn’t eating right, or drinking alcohol. And later on, I started to notice that I was struggling a bit.

“So that happened for about six months. And I was at work at the time, and I never missed work. I was a company man. I
always made my medical appointments either on time off or after work, if they aligned,” he explained.

That is until Cross got to the point where he could no longer go to the bathroom. He went to LaSalle Hospital, where doctors performed a rectal exam and an x-ray. They released him, saying he was constipated, and he was prescribed laxatives.

Three months later, he went to the Kateri Memorial Hospital Centre (KMHC), where a doctor performed another rectal exam and discovered a mass.

“At that time, I did not recognize what a mass meant. I just figured I was backed up and that it could be hard stool.”

Within the next week, he had a colonoscopy and was diagnosed. A week after that, he was told he was stage four.

Cross was forced to stop working immediately. He was working at a local factory in town. Luckily, his employer showed great compassion and generosity and continues to pay his salary to this day.

“I am forever grateful. It is the one aspect of my life that I don’t have to worry about. That is very good,” said Cross.

According to doctors who performed genetic testing, his cancer was not genetic but environmental. However, his children will have to get screened as of age 30 as a precaution.

COVID-19 also heavily impacted his battle with cancer. He is basically living in a double bubble where he can’t do anything or go anywhere and has to be extra vigilant because he is at high risk.

“The first year, me and my wife were going to Anna Laberge Hospital for treatments. The second year it was COVID,
so she couldn’t come with me and that only made me stronger because I had to do it.

“The more I can do what I can control, the more I feel in control. So, I have been driving myself to treatment and back for the last year-and-a-half,” he said.

The pandemic also impacted the cancer support group that he has been attending at KMHC. Because of the safety measures in place, the group can’t always meet, which has had negative effects on Cross’ mental health.

“The only people that really know what you are going through are the people in those rooms that are in the same shoes. They suffer, they know, and I can relate to that,” said Cross.

He recounted how he went through a very dark, difficult and painful period in January.

“Mentally, I switched it on myself six months ago when I went through my big struggle in January. It was the worst pain I have ever felt in my life.

“From there, it took me about three months to kind of balance out and kind of feel normal. From that moment on, I decided to replace mental pain with physical pain that I can control,” he said.

He started working out and doing pushups every time he felt his mental health taking a turn for the worse. He said that
he eventually got used to the physical pain and blocked out the mental aspect.

“And that is where I am at in my life. Every morning I do my workout routine, and it helps my digestive system as well. This is what drives me.”

But of course, it continues to be a day-to-day struggle, and mornings often dictate how the rest of Cross’ day will be.

“If I have a painful morning, it kind of… the mental state takes over, everything lines up, the pain, medication. Everything goes out of balance,” said Cross.

In terms of pain management, he has forsaken opioids and has even stopped taking Tylenol because of his liver. The only thing that he does take are cannabidiol (CBD) and tetrahydrocannabinol (THC) oils.