Skip to content
You are here
Home > News > Passports, Delta and outrage 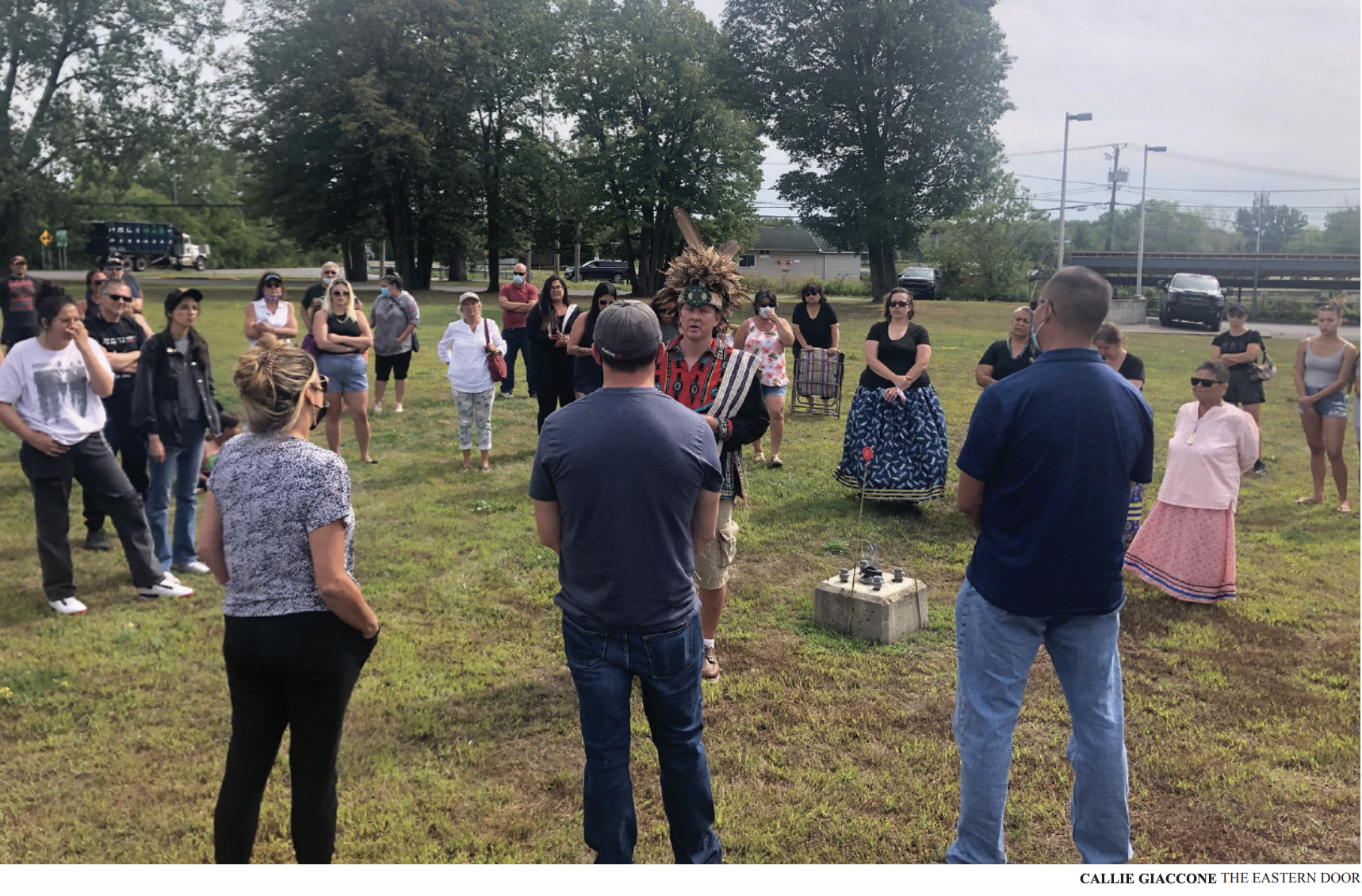 Kahnawake is sitting in a difficult position.

As the fourth wave and the red zone have been announced, the local Public Health team and the Mohawk Council of Kahnawake (MCK) have decided to implement proof of vaccination, with their inaugural goal still at heart: to keep the community safe.

“The simple six-feet distancing rules that we have seen for a long time is not as effective as we’d like against the Delta variant,” said Lloyd Phillips, the commissioner of Public Safety. “It’s more transmissible, it hangs in the air much longer, and it spreads further. We have to adjust and plan accordingly.”

However, this has sparked outrage from the community. On Wednesday afternoon at the powwow grounds, over 70 community members gathered to show their frustration and refusal of this implementation.

The demands were as follows:

– Disregard the proof of vaccination.

– Assure no one loses their job despite being unvaccinated.

– Ask Phillips and Lisa Westaway, the executive director of the Kateri Memorial Hospital Centre (KMHC), to step down from their positions.

“The people are not going to tolerate this,” said another community member at the meeting, Keith Mayo.

The group then moved from their initial location to the Peacekeepers’ station to ask Phillips to step down in person. They allocated three men to enter the building and speak with him, Mayo being one of them. All three men addressed Phillips and asked him to resign, a request that was denied. He remained inside throughout this time.

Three members of the Council were also present: Cody Diabo, Ryan Montour and Tonya Perron. The community members addressed the chiefs with demands and anger toward the recent measures while listening and engaging with them. Perron reiterated that for anything to pass in Council, there needed to be seven votes, and with only three chiefs present, nothing could be officially changed.

With the frustration from community members, the commissioner held his ground.

Phillips explained that it is still not too late for people to change their minds and get vaccinated, be it at the KMHC, or in Chateauguay, or other surrounding areas, especially with the fourth wave upon us, and 31 COVID-19 infections in Kahnawake, many relating to the Delta strain.

Opposing this idea, a community member at the gathering expressed her resentment toward this new implementation. “Vaccine should not be mandatory. If I don’t want to put something in my body, or my children’s body, I shouldn’t have to,” she expressed.

Despite what he calls “thick skin,” Phillips explained that his team and local Public Health are really struggling. “We’ve been on the frontlines, working very long hours for more than a year-anda-half. Right now, there’s no end in sight,” he continued. “People are having a hard time. It’s not easy. They are human, and they are going above and beyond their normal job for an extended period of time.”

Phillips explained that this recent increase in cases is nothing to be taken lightly. “We had 71 Kahnawa’kehró:non get COVID in the past six weeks, and we had 134 cases from March 2020 to July 2021.” Four of the 71 cases were vaccinated people. During the meeting, many members brought up their frustration with the absence of the MCK grand chief, Kahsennenhawe SkyDeer. Although not present, she did make an announcement to the community the day before on the Kahnawake 911 Facebook Live.

“I have to be forthcoming and honest that at first glance, I was not in support of this, as was a number of members on the Council. But after two weeks of extensive deliberation with public safety and the public health unit here in the community, I was able to see how the Delta variant is a game-changer.”

In full support of the proof of vaccination, Sky-Deer believes that it has never been more important to protect yourself and others by implementing this measure, especially with 31 active cases in the community.

Although there has been a backlash about following Quebec blindly, the commissioner reiterated that they refuse that statement and repeat that this decision was made with autonomy and agency.

Westaway explained that it was not an easy choice, but one made on the basis of facts, data and science.

She also reiterated that we are still in the fourth wave.

“This wave is different than anything we have seen before.”

Westaway said that the community dealt with two Delta outbreaks, which were indicative of what was coming and how they needed to respond.

This is when the initial announcement was made about proof of vaccination. Since then, Westaway explained that there had been many open and honest discussions in order to draw conclusions and make decisions.

“Part of that is developing a whole new plan, keeping in mind all the great things we’ve learned over the course of the last year-and-a-half about masking, distancing, hygiene and environmental measures,” said Westaway. She explained that it’s vital to balance everything they’ve learned throughout these difficult months, from family and collectivity to safety and health.

Westaway expressed the importance of these guiding principles:

– Save lives/minimize hospitalizations and death

– Keep cases and contacts to a minimum

– Ensure physical activity for all ages: maintain sports and recreation in and out of schools

– Use minimal measures to achieve goals

With the current 31 active cases, Kahnawake is now in the red zone. Kahnawake 911 highly recommends that community members limit private gatherings to small groups (two households), avoid crowds in general if possible, wear a mask both inside and outside, and keep a distance (beyond two metres).

Phillips explained that this situation is more significant than the individual.

“We have been saying with our orange shirts that every child matters, well, this is one step to keeping them safe.”

The proof of vaccination will apply to restaurants, bars and gaming rooms mainly. Masks are still going to be a part of the equation for quite some time.

Phillips warned that if the proof did not apply, it opens an avenue for unvaccinated non-locals to visit Kahnawake because it will be the only place they will be allowed. “At least you know that if you are entering an establishment, that everybody in there is vaccinated,” said Phillips. “The chances of having someone in there with COVID is greatly reduced, and the chances of you catching COVID in that establishment are very low. ”

Phillips said his ultimate goal is to educate people and show them that their choices affect the mental and physical health of the collective.

“It’s about explaining the rationale and the implications and hoping that a person’s sense of community and sense of responsibility drives them to do it. Not because someone is telling you, but because it’s the right thing to do.”