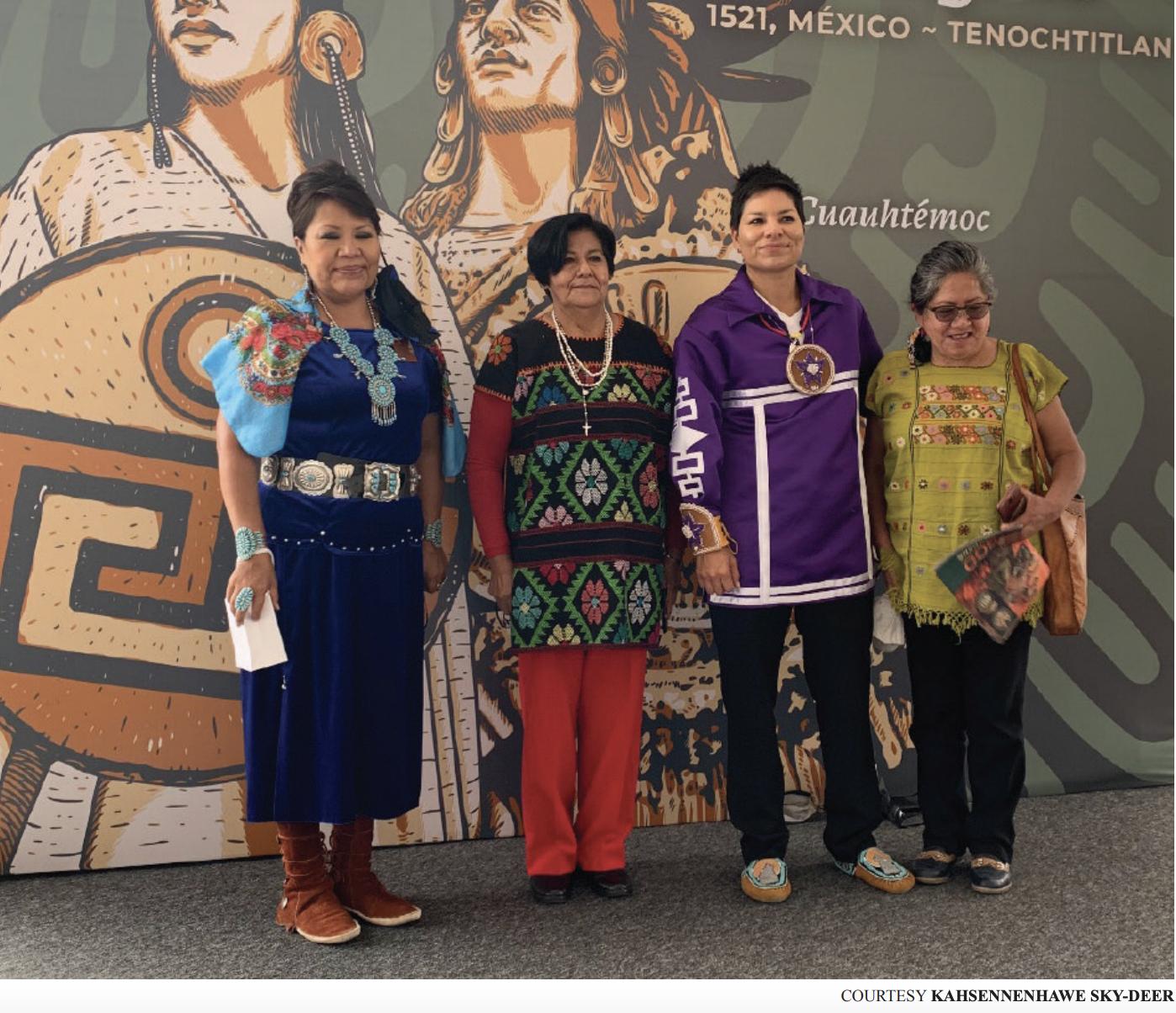 Last week, Mohawk Council of Kahnawake (MCK) grand chief Kahsennenhawe Sky-Deer was a special guest and speaker at the 500 years of Indigenous Resistance – 1521 the Fall of Mexico – Tenochtitlan ceremony in Mexico City.

“August 13, 2021, marked the 500-year anniversary of the fall of Mexico – Tenochtitlan, which was the Mexican empire at the time of Indigenous Peoples,” said Sky-Deer.

“It was the president of Mexico (Andrés Manuel López Obrador) who hosted this event. The Foreign Affairs Ministry had reached out to try and find Indigenous women from the United States and Canada to speak at the event.”

In fact, the Mexican government first contacted Melissa Oakes from Akwesasne, but due to her own initiative taking place on the same day, she was not able to attend.

“She asked me to go in her place. She wanted it to be someone from the Kanien’kehá:ka Nation who wanted to create alliances of Indigenous Peoples from across Turtle Island,” said the grand chief.

“The ceremony was absolutely beautiful. It was held at the city square (Zócalo Plaza) in Mexico City.”

The event brought together Indigenous delegates from across the world that talked about the systemic hardships that Indigenous communities have had to fight over the course of history.

“They made a replica of the temple of Tenochtitlan at the time,” she said.

Some of the other speakers at the event included the mayor of Mexico City, Claudia Sheinbaum Pardo, president López Obrador, and Jamescita Peshlakai, a member of the Arizona State Senate.

“She was the first Indigenous woman senator – a Navajo woman from Arizona,” said the grand chief.

Sky-Deer said that the celebration was very uplifting and inspirational, and the message was about bringing Indigenous Peoples together to celebrate their resilience and strength.

“(The discussions were) about resistance and what we have endured over 500 years of oppression and attempted genocide. All of the millions of Indigenous Peoples that died fighting for the survival of who they are, and the fact that we are still here,” she said.

The conversation also focused on the future of Indigenous communities and asserting their rights and jurisdiction.

“There are still Mexican Indigenous populations that are fighting for equal rights and to be treated like humans. Their economy is very poor, and they don’t have a lot of opportunities,” explained Sky-Deer.

She said it was time for Indigenous Peoples to rise up and create a new future rooted in Indigenous identity and the revitalization of different cultures and languages.

“It’s about being in control of our future and creating these alliances to learn from each other and grow together as Indigenous Peoples,” she said.

As part of her trip, the grand chief also got the opportunity to visit a few historic sites after the ceremony. “They treated me like a dignitary, with red carpet treatment and a police escort. They took very good care of me,” she said.