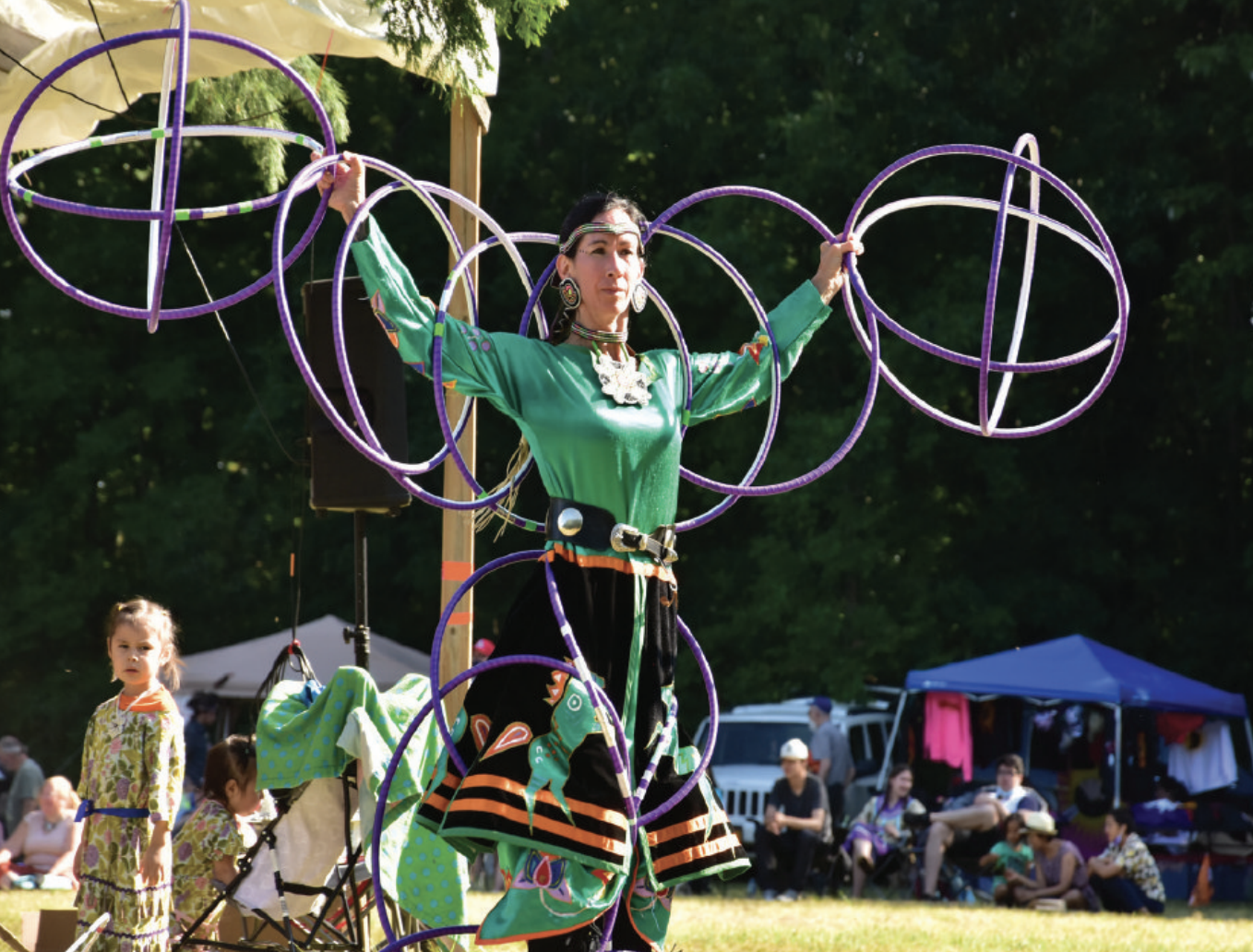 There were shining rays of sun peeking through the towering trees that circle the traditional powwow grounds in Kanehsatake, as hundreds of Onkwehón:we and friends gathered for a celebration under the theme of Land Back.

On Saturday, July 10, and Sunday, July 11, dancers, drummers, artists, merchants and eager participants of all ages made their way to the outdoor space.

While some attendees couldn’t wait to rush to one of the many kiosks that sold buffalo burgers or walleye nuggets, others scouted the vast green area to find a spot sheltered from the sun, where they could enjoy the sight of dancers spinning in flurries of bright colours.

The Land Back Pow Wow was organized by a handful of community members who chose to dedicate the event to land and water defenders across Turtle Island. 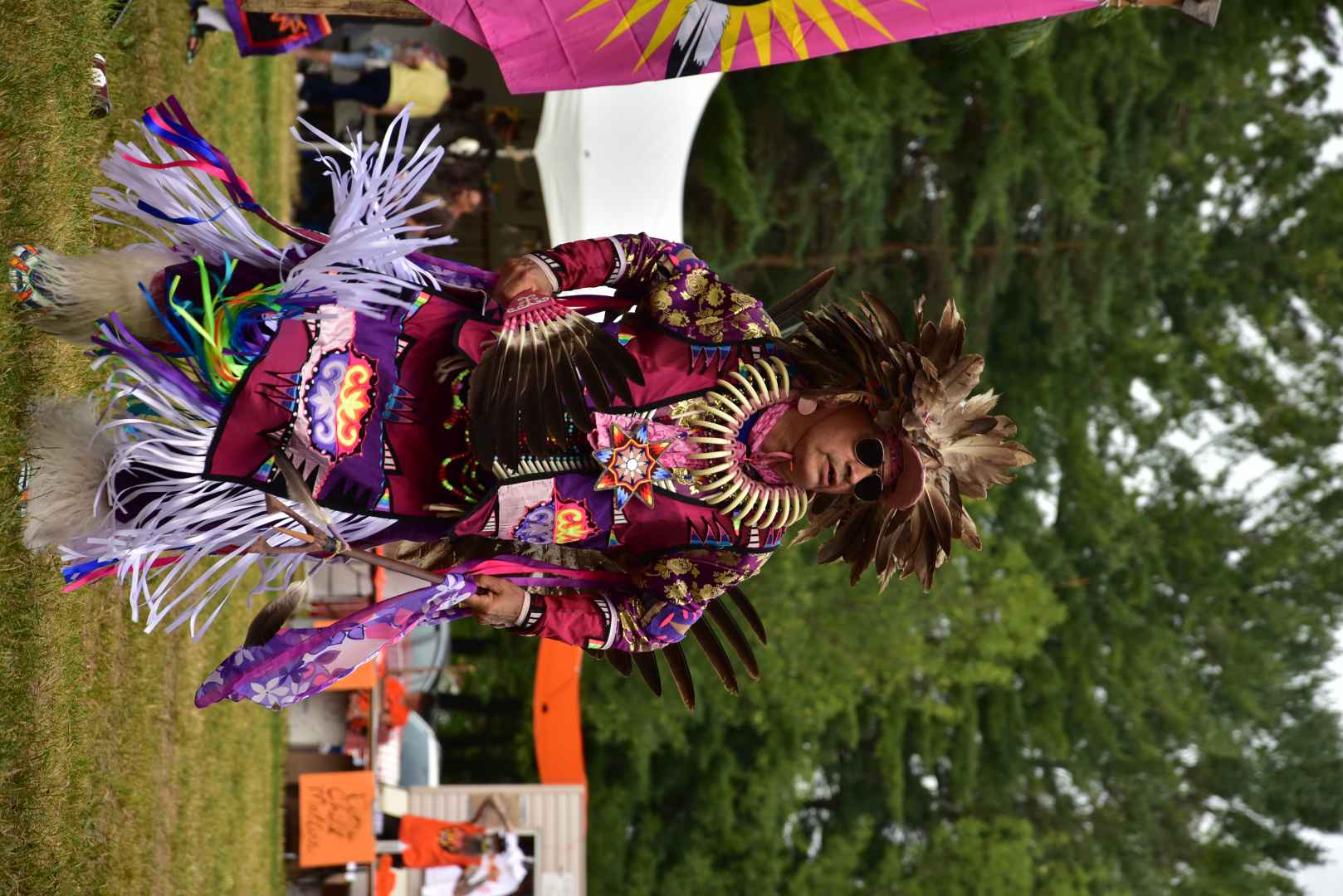 In particular, the event’s theme paid a special tribute to the Kanehsata’kehró:non who stood on the front lines during the 78-day-long Siege of Kanehsatake that began on July 11, 1990.

For the occasion, Katsi’tsakwas Ellen Gabriel gave a speech that sought to remind people of the ongoing battle for justice and peace Onkwehón:we lead every day.

Since she was first chosen as a spokesperson by the People of the Longhouse in the summer of 1990, Gabriel has been widely recognized as a fierce defender of both the land and the people to whom it belongs.

“It was a paramilitary force that was here to kill the Kanien’kehá:ka people of Kanehsatake, make no mistake about it.”

The Kanehsata’kehró:non recounted how exactly 31-years earlier, at 5:15 a.m., it was 13 unarmed women who stood on the frontlines facing hundreds of armed Surete du Quebec and Canadian Armed Forces officers.

“It’s so important to tell our stories and to tell them truthfully,” said Gabriel. “We endured concussion grenades, and we endured three different types of tear gas.”

“We said: ʻYou can take the barricades down, but they’re just going to go back up. Come do your job, dismantle the barricades for the rich white people who want to extend the golf course and dig up our ancestors to extend their parking lot,’” she said. “This is another part of Canada’s shame. Quebec’s shame.”

Gabriel asked each and every person listening to remember that women and men without weapons took to defend the sacred Pines that are still under threat today.

Among the men who stood strong during the standoff also known as the so-called Oka Crisis, was elder and warrior John Cree.

When Cree spoke to people spread across the field, he expressed a single wish of unity.

“We ask that you join us in the fight for our land – (this is) for our people and our children to have a future,” he said. “Join us because the government and band council will not fight for us.”

Elders, warriors, community members and Onkwehón:we from all walks of life exchanged turns sharing words with the guests who carefully listened. 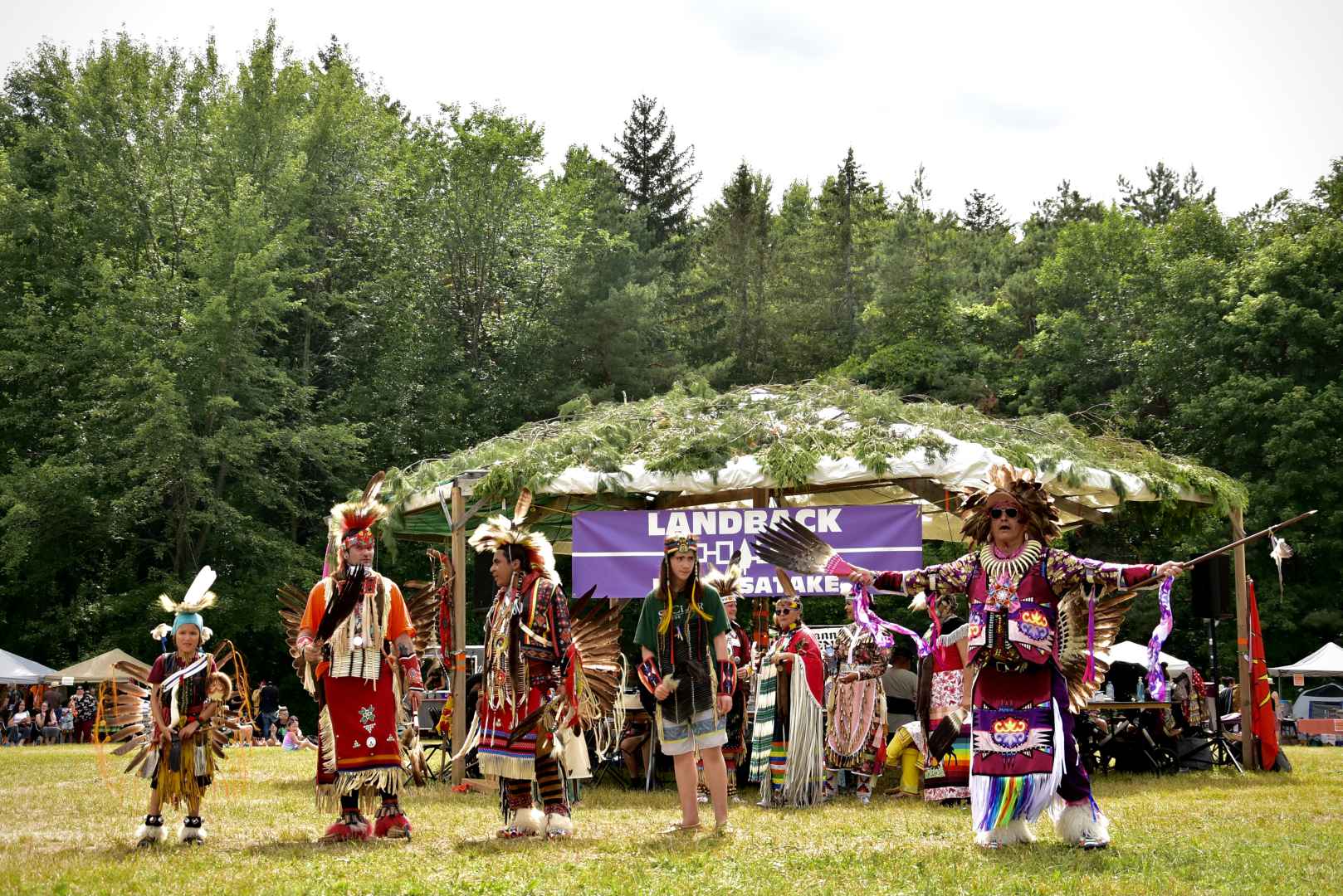 Al Harrington was the lead organizer behind the powwow, which he said drew people in from as far as British Columbia and Buffalo, New York.

“This event is to honour the past, present and future. This is about honouring our warriors that stand up right across Turtle Island on all land issues,” said Harrington. “In the end, for me, it all also comes back to my kids and me wanting to teach them about culture.”

Pulling off an event of this magnitude was no small feat.

Harrington said the achievement was made possible through the support and dedication of countless community members and volunteers of the Wolf Pack Street Patrol – an organization he co-founded, which distributes food to unhoused people in Montreal.

Highlighting the Land Back movement was a way for Harrington to continue raising awareness about the continued land theft committed by governments at all levels.

With Kanehsatake’s Commons of the Seigneury of Lake of Two Mountains land claim settlement still under negotiation, Harrington was adamant that the community would not concede.

“All we want is our land back – we don’t want any money in exchange for it,” he said. “Governments keep using this word “reconciliation,” but I don’t like that word at all because reconciliation is dead.”

While these issues persist, the organizer said it was critical for him to put together an event that would not only pull together the community, but also serve as healing.

The growing number of unmarked graves being discovered at former residential schools is a painfully stark reminder of the perpetuating harm imposed on Onkwehón:we at the hands of the state.

In the sea of vivid colours at the grounds throughout the weekend was a noticeably high number of orange shirts – all commemorating the lives of children whose lives were stolen. 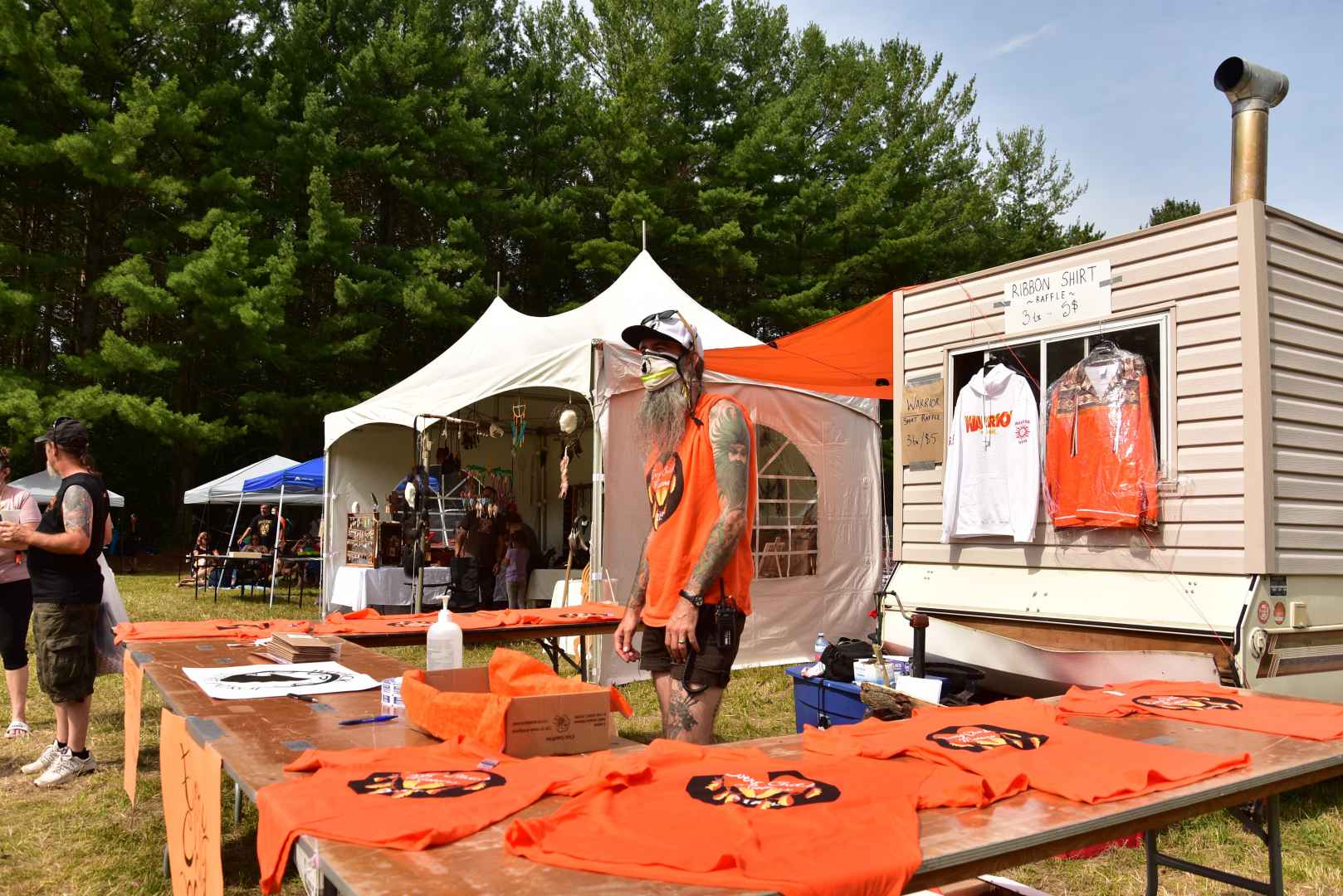 “It wasn’t at all a regular powwow – this was a special one to honour the children, it was for the land back (movement), and it was to honour the warriors,” said Tess Lalonde, who is from the Birdtail Sioux Dakhóta Oyáte (Dakota Nation) in Manitoba.

Lalonde said it was important for her to pay respects to both the children and the warriors who fought for the community.

As a firm advocate of mental health, she emphasized how crucial moral and community support are in these times of mourning.

“It broke my heart when I heard the news about the first 215 little children found,” said Lalonde. “We all need ceremonies to bring these children to peace. To all be together today – grieving – this is all really important.”

For the event, Lalonde put her talent as a seamstress to good use by sewing ribbon skirts, “Land Back” face-masks, a jingle dress and even a ribbon shirt, which was drawn in a raffle to raise funds for the powwow.

She said this was her way of contributing to the event that brought her and so many the joy they needed.

“This is good medicine, and Kanehsatake needs this healing. We might need a second shot of it too – just like the vaccine,” said Victor Bonspille, Mohawk Council of Kanesatake (MCK) chief and one of two candidates running for the grand chief position in the elections taking place on July 31.

“There’s lots to commemorate, to remember and never to forget,” he added. “This is a great way to make people aware and keep these issues on people’s minds.”

Although Bonspille applauded the health measures implemented for the occasion, the event nonetheless drew heavy criticism from local authorities and other MCK members.

“When you look at other First Nations, they all postponed events in their communities because we’re not out of the woods yet with COVID,” stated MCK grand chief Serge Otsi Simon. “These variants are still here, and we don’t know that the vaccine will stop all of them.”

According to Simon, event organizers neglected to contact the Council and the local COVID-19 Emergency Response Unit (ERU) to consult whether or not a powwow could occur.

“It’s not only about the health risk – or even about the variants which are around – it’s also the fact that now, because of this powwow, the event planned for July 31 will embolden those promoters to go ahead and do it despite what anyone says,” said the grand chief, about a music festival headlining rapper Waka Flocka Flame set to happen at the end of the month.

“Our position has been the same since the beginning. No public gatherings,” explained ERU spokesperson Robert Bonspiel.

Since Saturday, Bonspiel said the ERU had received “a number of complaints,” many including photographs taken at the event, which he states show a lack of social distancing and mask-wearing.

At the grounds, hand sanitizer stations were set up at the entrance, exit, and every kiosk. In addition to this, hosts and volunteers frequently reminded attendees to properly distance and wear their masks as they circulate. 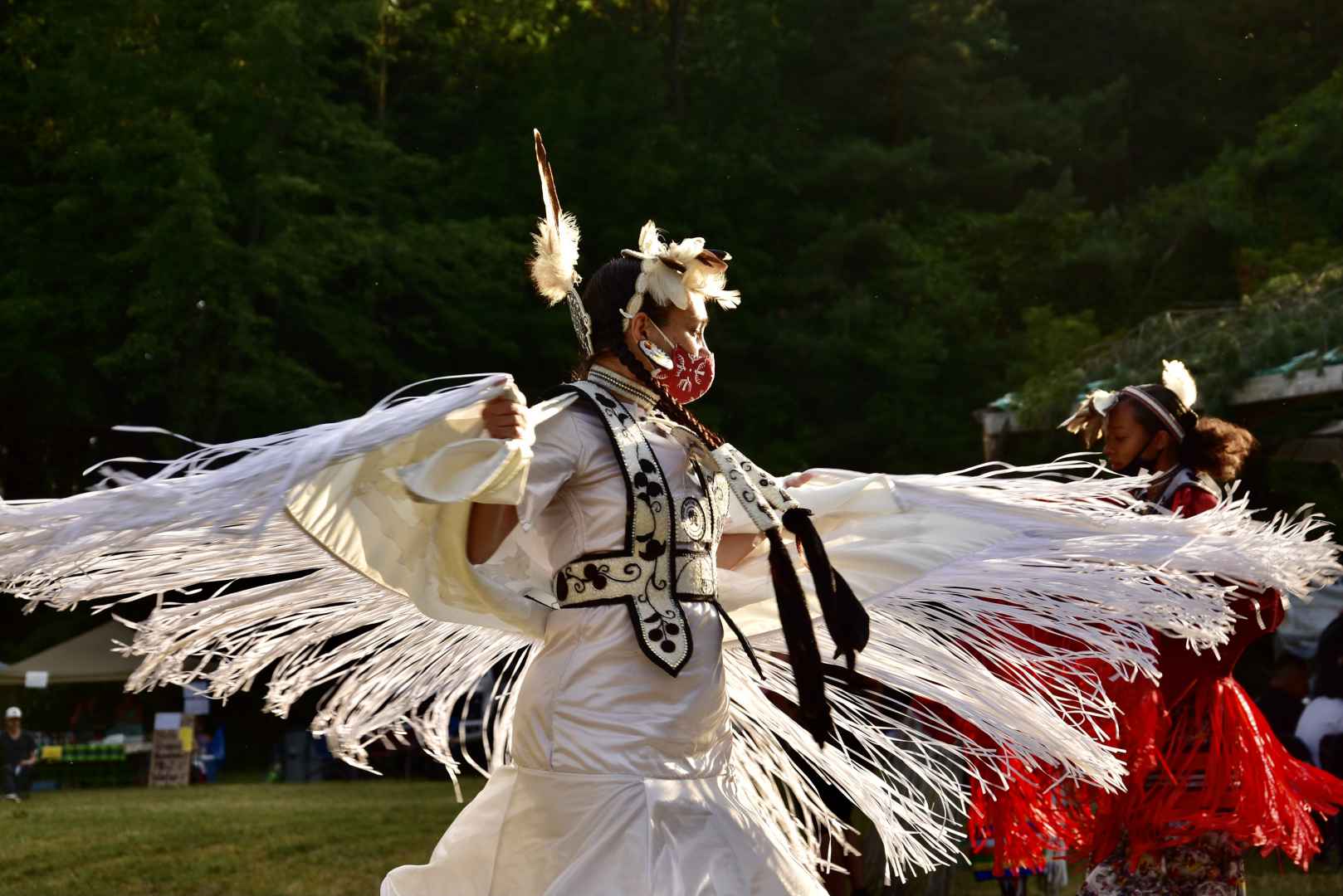 Contradicting comments about the regulations at the powwow did not dissuade Kanehsata’kehró:non Sateiokwen Priscilla Mallette, who said the event went above and beyond all of her expectations.

“When we got to the entrance, we could feel the positive energy. The energy and vibe were amazing – it was good medicine for the soul,” said Mallette. “Seeing everyone come together and still respect the COVID guidelines was a warm sight to see. We all needed this during this time. I felt a warmth of happiness, and it was calming.”

For Cheryl Scott and her husband Winston Nelson, leaving home has been a daunting task since Nelson has been in a wheelchair after suffering a stroke in 2013. However, in spite of the health and mobility limitations the elderly couple face, she explained it was crucial for them to attend this event.

“Out of all the powwows I’ve ever been to, this is the first one where volunteers went around checking on elders, making sure they were well and had water,” said Scott. “This is what the people needed – this is what we all needed. To get out and be together, as one community.”

She expressed that she and her husband were overwhelmingly touched at the event, which she repeatedly described as “the best powwow” to have taken place in Kanehsatake.

“I was proud to live here and Winston was so proud to be a Mohawk this weekend. The whole community made us so proud,” said Scott.

Even with the existing disagreements over the Land Back Pow Wow, Gabriel expressed a powerful message that resonated with Onkwehón:we far and wide.

“Our people are brave – for over 500 years our people have had courage. We are brave people and we are good people. We are not the criminals that Canada wants the public to know. We are kind people,” said the rights activist on Sunday.

“Look at the spirit here today. We are here, we are alive and we are not going anywhere – we are going to protect the land.”