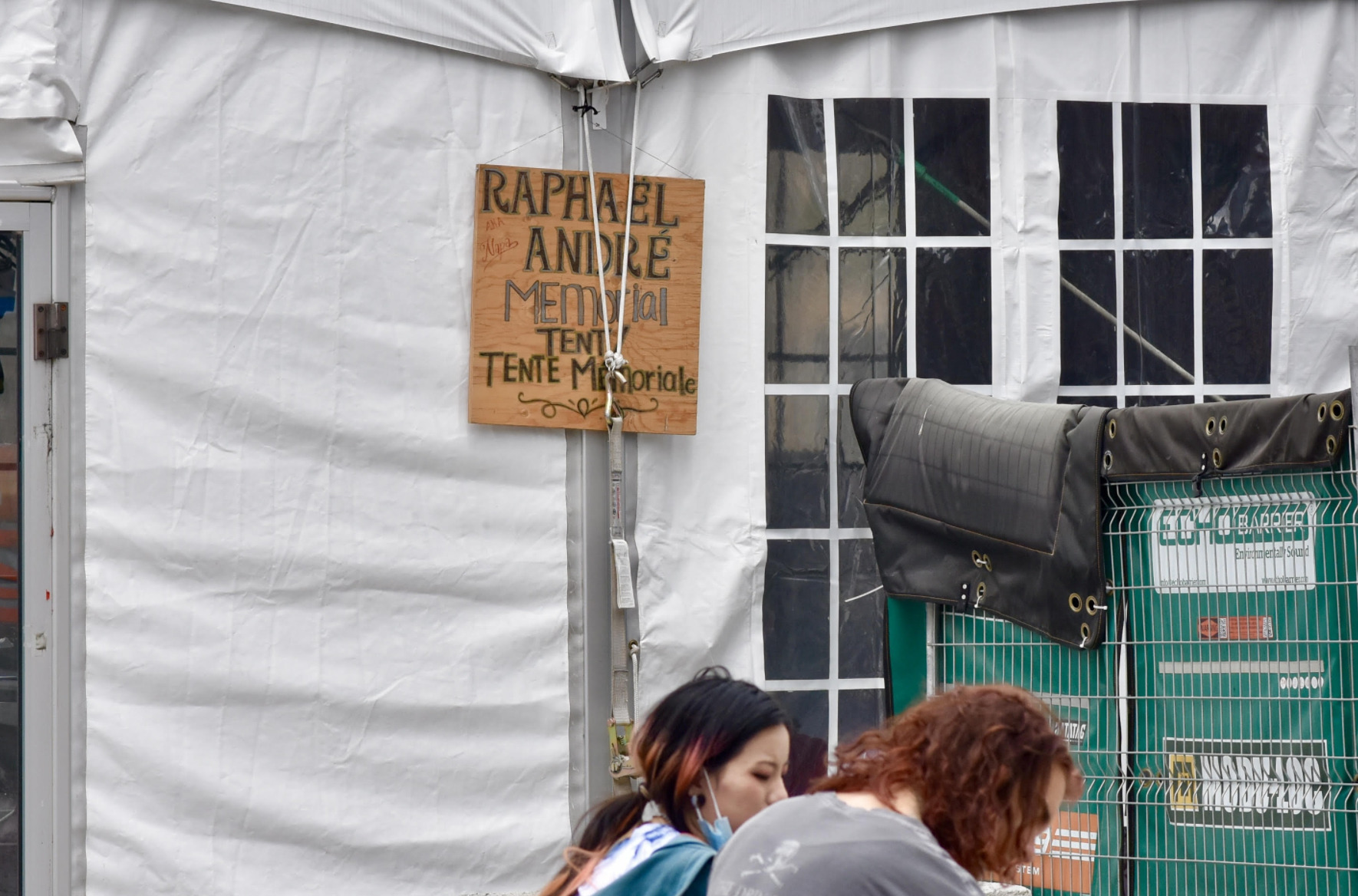 Since its opening in early February, the Raphaël André Memorial Tent has welcomed thousands of homeless Montrealers in search of comfort, security and a sense of community.

While it was announced last week that the city had extended the tent’s permit to operate in Cabot Square until December 1, requests for a permanent solution are still growing.

Among others, there are calls to transform the warming tent named in honour of Raphaël André, an Innu man found dead steps away from Montreal’s Open Door drop-in centre in January, into a stable shelter for its clientele.

“We have a lot of people that come to the tent who aren’t allowed to go anywhere else,” stated Nakuset, executive director of the Native Women’s Shelter of Montreal (NWSM) – the organization which spearheaded the tent project.

“Oftentimes, it’s people who are under the influence, who might be violent or have mental health issues that come to the tent,” she explained. “The other shelters aren’t able to accommodate them so they have no choice but to bar them.”

The low number of facilities open to people under the influence, combined with a restrained number of beds, are significant factors behind the effectiveness of the tent.

“We have over 100 people that show up every night and since we opened we’ve had over 6,000 visits,” said Nakuset. “Although the tent is great, it still only has space for 16 people, so it can only help 16 people at a time.”

In a response to The Eastern Door newspaper in Kahnawake, Montreal spokesperson Mélanie Gagné said that the city recognizes the need for “increased social interventions” in the Cabot Square sector.

“The extension of the opening of the memorial tent until December 1 will allow the various partners involved in the project to think about more sustainable solutions for these people and to mobilize new partners,” wrote Gagné.

She added that the city remains committed to supporting the health network and community sector in the establishment of sustainable, adapted and safe resources for people experiencing homelessness.

“This work is done through financial or logistical support, in particular,” wrote Gagné. “The city is also collaborating in planning efforts for the next interministerial and intersectoral homelessness action plans of the health network, in order to promote the implementation of lasting solutions.”

With last week’s news of the extension also came a ceremony held on Friday, June 25, in honour of Raphaël, and in support of the users who frequent the tent named after him.

Members of Raphaël’s family travelled over 1,000 KM to Montreal from the Matimekush-Lac John community in northern Quebec, to attend the commemorative event.

His brother, Ghislain André, expressed how moving it was not only to see everyone gathered to pay their respects, but also for him to have the opportunity to see where his brother had been living these past years.

“When I see other people living in homelessness, I think of my brother who slept outside, on the ground, and it’s all very emotional,” said Ghislain. “When looking at other people here – possibly my brother’s own friends – I think about how I want to see the memorial tent continue for them.”

The fourth extension of the tent was a bittersweet relief for the brother, who said although he’s grateful for the services it provides, people living in conditions like Raphaël would benefit from a fixed building.

“I want permanence for the tent and Raphaël’s friends,” he said. “A place not just to eat or sleep, but a place to live and learn – where you can heal and find your way back up.”

Along with the bid for an actual building, Ghislain said that shelters should always be operational at night.

The night Raphaël passed away, the shelter he often frequented had been ordered by public health officials to close its doors at 9:30 p.m., following a COVID-19 outbreak.

Located in the Milton-Parc neighbourhood, The Open Door is a 24-hour centre serving unhoused individuals.

“I know that he would be alive if it was open, or if there would be more places for him to go to and beds for him to sleep on,” said Ghislain.

Raphaël’s brother also expressed a desire to see more collective efforts to address the crisis faced by many Onkwehon:we moving to the city.

“I wish to see communities work together by bringing a person from each place to work with our members here,” he said. “They are well surrounded here, but maybe it would bring relief for them to see someone from where they, too, are from.”

The benefits of involving different nations in actions to help Montreal’s unhoused community is already in the works, according to Nakuset.

In order to achieve this, the NWSM, along with the Innu Nation chiefs, Resilience Montreal and other organizations, have hired Indigenous consulting firm Acosys, which is tasked with coordinating efforts to allow increased mobilization between all concerned communities.

“We want to reach out to every nation and ask them about their members who are coming to Montreal, what their concerns are, and if they have a way to give us additional resources; whether it be human or money resources – because we need to do something more,” said Nakuset.

Vice president of Acosys, Éric Cardinal, said that one of his priorities includes expanding the list of actors engaged in working on solutions.

“The tent was initially brought forth by the Innu Nation and Kahnawake, but now we’re working to widen the scope of those involved by including the Cree, Inuit, Anishinaabe, Atikamekw Nations,” said Cardinal. “We really want to open this up so that every community concerned will be involved in all the steps for long-term plans.”

During a coordination meeting that took place on Tuesday, June 29, Acosys confirmed the extension of funding for the memorial tent.

“In addition to the permit extension, the City’s financial portion used for the maintenance of the tent is also being renewed,” he said. “This is considered to be emergency budget funds which are in place because of the pandemic, but what we were confirmed is that this budget will stay even if the emergency measures are lifted before December 1.”

While this assistance is welcomed, the NWSM director expressed that money to fund a temporary shelter is not the be-all and end-all answer.

“There’s always this tension hanging whenever the deadline looms over us and every time the staff repeats that they don’t want to give up on the clientele who they know needs them,” said Nakuset. “It’s good that we have till December, but at the same time, we need the help to just find something sustainable.”

For Ghislain’s part, although the tent cannot bring his brother back, he expressed comfort in knowing that action is being taken.

“At the memorial tent, there’s people there to not only give food and water, but also help when they’re in need,” he said. “They need a place with a roof over their heads and where there’s warm meals – I want all of this to continue for Raphaël’s friends.”