Skip to content
You are here
Home > News > Fighting for Onkwehón:we women’s rights 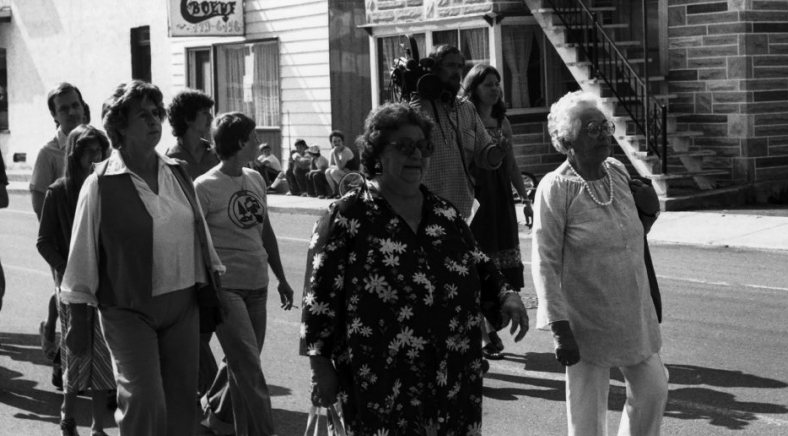 Mary Two-Axe Earley was a powerful woman who affected change, yet far too many people don’t know who she is.

That’s about to change.

Kahnawa’kehró:non Courtney Montour’s latest film, Mary Two-Axe Earley: I am Indian Again, is equally as powerful. Created with archival footage cultivated from Two-Axe Earley’s incredible fight for equality, Montour provides a fitting tribute to a woman who should be honoured in every community, not just Kahnawake – where she is slowly being forgotten as the days and years go by.

And that’s a shame.

There should be some form of tribute to her in town, to remind people of her battles.

“This is Mary’s film,” said Montour. “She is speaking directly to us, inviting us to sit with her around the kitchen table to listen to her story. I did not want to interfere with this very intimate experience by adding ‘informational’ narration. Instead, I thought about my feelings for Mary and what I wished I could say to her if she was still with us.”

Two-Axe Earley, known to many in the community as, quite simply, Sister, stood up to the powers that be, including her own people, even when she was threatened and told to shut up – and she kept right on fighting.

The Indian Act’s racist legislation where women lost their rights as Onkwehón:we simply by marrying a non-Native man, was wrong then and is wrong now.

No one should lose their rights based on whom they choose to be with.

As no one should be judged solely by blood quantum alone – it is far too limiting of a colonial construct, meant to eradicate us more quickly.

As her son Ed put it in the documentary, “don’t ever let anyone tell you you’re not an Indian.”

His mother Mary never let anyone tell her that because she was still Native, no matter whom she was with.

“Mary fought against a country for the rights of First Nations women and children. She was persistent and led with strength, love and compassion, something that so many of our women continue to do today,” she said.

Making this film was a four-year journey, Montour said, citing one of the reasons it took so long was the tedious search through the archives.

“Mary’s 20-plus year fight was so well-documented by the media, but so little of it was kept by Canada’s media and archival institutions. It brought a sense of urgency to make this film while people who knew Mary were still with us to share their knowledge,” she added.

Cree activist Nellie Carlson, one of the co-founders of Indian Rights for Indian Women, based in Edmonton, appears in the film. She passed away in 2020 at the age of 93.

Mary’s son Ed passed away in January of this year.

Mary sat next to big wigs – premiers and prime ministers alike, including Rene Levesque and Pierre Elliott Trudeau – and she never wavered.

In classic footage from the 1980s, just a few short years before her long battle led to Bill C-31, a partial remedy of the disaster that continues to be the Indian Act, she sat next to politicians who are smoking in a public area while she nervously tells her story.

That’s why she was so endearing. She was and, thanks to this film, is, real. She’s just a regular Onkwehón:we woman who wanted equal rights and representation – to be able to vote here in Kahnawake; to be able to be buried here – who fell in love with someone from out of town.

“Abenaki filmmaker Alanis Obomsawin offered me the incredible gift of audio recordings that she had taped with Mary over several months in 1984,” said Montour. “They were recorded in Mary’s home, with the two of them sitting together around the kitchen table. They are the backbone of the documentary, allowing Mary to tell her story in her own words. Alanis’ guidance has been a big part of the entire filmmaking process.”

A Kanien’kéha version of this important film, which is premiering at Hot Docs (check it out online, April 29-May 9), is being worked on as we speak.

The documentary is also coming to Kahnawake soon, so everyone can enjoy listening and learning from such a powerful force firsthand.