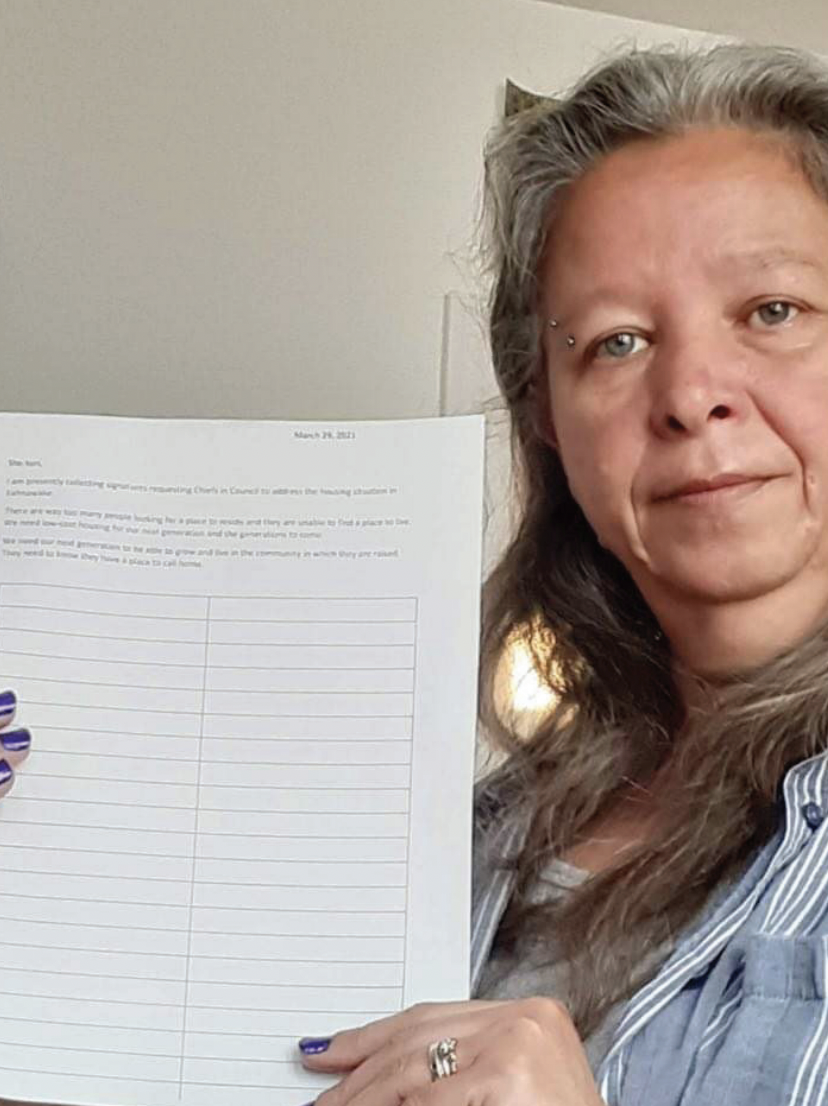 This article was written in collaboration with the Eastern Door reporter Laurence Brisson Dubreuil.

This week, Kahnawa’kehró:non voiced their concerns on social media in an attempt for immediate action on what they are calling a housing crisis.

This has been a point of contention for years, as the number of residents continues to grow and the community tries to safely navigate the threatening health risks brought on by the pandemic.

In the year-and-a-half leading up to 2021, there have been a total of 111 people added to the Kahnawake Kanien’kehá:ka Registry, which, some feel, could put further pressure on the housing market.

“I see a lot of people looking for housing in town and there’s absolutely nothing,” said Kasandra Whitebean, a mother of four. “They don’t even have emergency housing available.”

She lost her place this week, and is scrambling to find another space for her and her young children. This is a pattern for many new families looking to have their own space and autonomy. “It’s the young people that are stuck in their parent’s basement,” she said.

In Kasandra’s particular case, she was in a dispute with her landlord about rent prices and housing repairs. This dispute was not an isolated incident, as they had issues prior to this upcoming month. She explained that her landlord gave her an option to sign a one-month lease, or be out by the end of this month. Seeing as she did not sign the lease, she was pushed out of her home.

Kasandra’s mother Tammy said that this pressing issue should be one of the leading priorities of the Mohawk Council of Kahnawake (MCK).

“If this generation is having trouble with finding homes, then what about their children?” expressed the worried mother and grandmother. “MCK has to address this issue now.”

Gina Deer, the MCK chief who holds the housing portfolio, said that the council is well aware of these pertinent issues. “There’s always been a shortage in Kahnawake,” said the chief.

“Some people get upset, and they get loud and vocal.”

Loud and vocal they have become.

On Tuesday, Tammy announced that she had started a petition requesting that MCK take immediate and concrete actions toward addressing and fixing the current state of housing.

“Now that the housing situation is personally affecting my family, it’s pushed me to start a petition,” said Tammy. “It’s a crisis to see the desperation in my daughter’s face and the sadness it brings to her, not knowing where her children are going to lay their heads.”

Kahnawa’kehró:non Kim Diabo is one of the residents signing the petition. She currently lives with her adult daughter, as her child cannot afford to move out on her own. “There’s just simply not enough housing for our youth, our young adults that are just starting out,” said Diabo.

Many of the issues brought forth by residents have already been identified in the most recent survey conducted by the housing department of MCK in 2018.

Individuals within the community have unique issues that need to be addressed. Brandi Rice, another mother of four, has been trying to build a house for 20 years. “There’s so many things that are holding me back from getting anywhere,” she said.

“I was denied land through council, but now I finally have my own land.” That being said, Rice explained that she cannot get approved for a mortgage. “It’s all around ridiculous.”

According to Rice, the house on the land handed down to her by her great-grandmother is over 100 years old. “It is falling apart and it would cost me more to fix it than to build another home,” she explained.

“I have to find a house very soon or I will have to move out of Kahnawake. It’s impossible to find any place in town to rent and my house won’t make it through another winter.”

Council said they have identified the needs of the community and are currently looking for a new housing director who will be responsible for the development of the rental board. Deer explains that the process has been hindered by COVID-19, which is slowing down the process.

Although it is not favourable for community members, she explains one must be prepared for all outcomes. “It’s a reality – if you cannot afford to build, we only have a certain amount of housing available,” said Deer. “Sometimes you have to move outside of the community.”

Another limitation faced by community members is the matter of being registered within Kahnawake. “You have to be on the registry to get any kind of service within the community,” explained the council member.

But people in Kahnawake don’t think it should come to this. “I would not want to leave Kahnawake. I have been here a long time now, I feel safe in my community,” said Tammy.

She explained that Kasandra is one of those residents who is not registered. “This is where my daughter is raising her children, this is where she’s been living. She does not want to move out of Kahnawake.

As community members highlight all of the issues that need to be dealt with, they believe the time for surveys and speculation has run out.

Diabo recognizes that this issue has many layers, and there is no choice but to push it to the forefront. “They really need a whole revamp,” she said. “It is a dire emergency.”