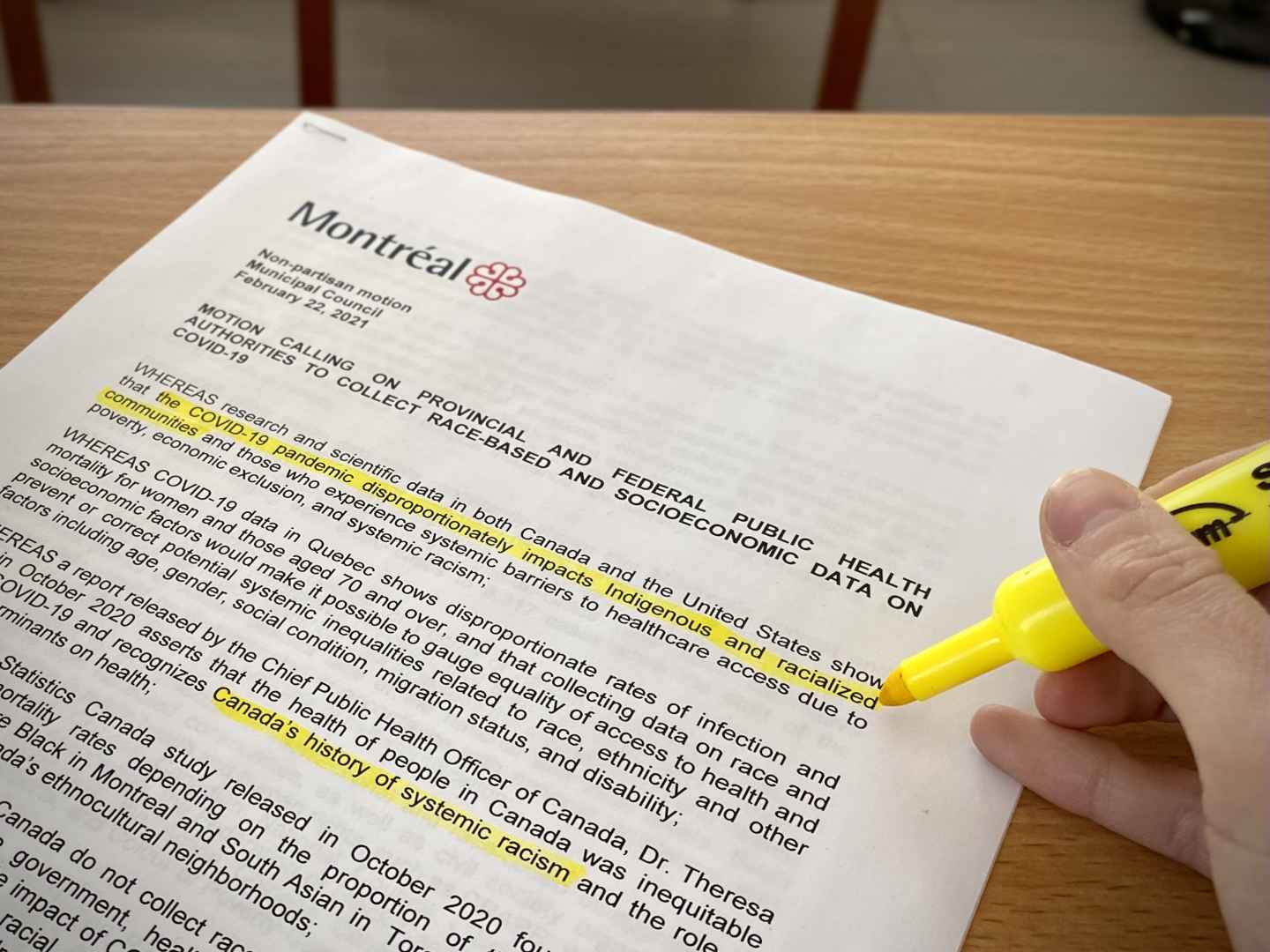 On February 22, Montreal’s City Council will be voting on a motion that calls on provincial and federal public health authorities to collect COVID-19 data based on race and socioeconomic status.

As research across the word emerges about the impacts of COVID-19 on vulnerable populations, there are still no such numbers in sight for the province of Quebec.

The Centre for Research-Action on Race Relations (CRARR) and a Montreal councilor, Marvin Rotrand, announced that they are spearheading a motion calling on provincial and federal public health authorities to collect COVID-19 data based on race and socioeconomic status.

Members of Montreal’s City Council will be asked to vote in favour of the motion introduced by Rotrand, which is pressing for what he calls “crucial data collection” not only for Quebec, but the country at large.

“If you are an Indigenous or racialized person in Canada, your risks of contracting COVID-19, being hospitalized and of dying as a result of the virus, are much greater than if you were white,” said the independent councilor during a press conference held on Tuesday.

“There’s also a clear correlation between poverty and getting COVID-19,” continued Rotrand. “Yet, without knowing the exact figures, we can’t respond appropriately.” Created in conjunction with local civil rights organization CRARR, the motion places Indigenous and racialized communities, along with populations facing socioeconomic barriers, at the forefront of the conversation.

The importance of assessing the risks posed to Indigenous peoples by the pandemic is an element the executive director of CRARR, Fo Niemi, believes is pivotal to the motion.

“We have to be sure that the needs of Indigenous people in the city come first in the debate on COVID-19,” said Niemi. “They too often tend to be at the bottom of the ladder.”

There are currently 24 organizations in support of the motion that will be voted on February 22. These groups represent racialized and other minority groups, and are lending their support as the motion works cohesively with their core values.

The Native Women’s Shelter of Montreal is one of the groups servicing Indigenous populations supportive of the motion.

The executive director of the shelter, Nakuset, explained that part of her motivation to support the call comes from a local need.

“I’m hoping that if the motion is done on a municipal level it will be faster,” she said adding that from her experience, this is the right tactic.

To date, COVID-19 data collected in Quebec, only factors components relating to gender and age – thus overlooking social determinants such as race, income and disability.

The call to motion, which comes nearly a year after the pandemic struck Canada, is not the first of its kind to be made in the province. Last spring, CRARR had already led calls for Quebec to collect race-based data on COVID-19 and although chief Public Health officer Horacio Arruda agreed to collect such data, this position was later backtracked.

Councilor Rotrand emphasized that not only is the data a matter of public health, but also of transparency and accountability.

“Is the government of Quebec afraid of the numbers? Will they reveal racial disparities?” questioned Rotrand during the press conference.

Also questioning the provincial government’s role throughout the ongoing pandemic, Nakuset pointed at the need for decision-making at all government levels to factor determinants like the ones included in the motion.

She explained that the need to do so is dire in times that we’re in, when living conditions for Indigenous homeless population are further aggravated by the administration’s stance on institutional racism.

“Indigenous people face systemic racism by multiple institutions, so we need to create concrete change now,” said Nakuset, adding that the Quebec government still won’t acknowledge the existence of systemic racism. “There’s not a moment to waste.” Mohawk Council of Kahnawake (MCK) chief and lead on the Indigenous Rights and Research Portfolio, Ross Montour, shared similar views about the motion and how it pertains to Indigenous people in Montreal dealing with homelessness.

“The issue of homeless people in the city is an issue with social implications that the pandemic has exacerbated, especially in terms of the potential overall health of the citizens,” said Montour. “And part of the issue remains that the premier (Legault) has been extremely reticent to acknowledge systemic racism in the province.”

Despite Kahnawa’kehró:non largely having been spared from contracting the virus, community members still face higher risks due to factors such as multi-generational housing and systemic inequities, when seeking services such as healthcare outside the community.

The MCK chief said that as consequential as the motion is, he believes that there is already supporting evidence that marginalized people are more likely to be affected by the virus.

“The fabric of this society has put my people in a situation where we are disproportionately impacted by things like COVID-19,” he said. “If you live in a society that has as many disparities in terms of socioeconomic conditions and where people are so polarized in terms of wealth versus poverty – it’s just a fact,” said Montour.

Scientific director of the Sherpa Research Institute, Jill Hanley, was among those who joined the press conference to support the motion.

Hanley conducted a study last year on the impact of COVID-19 on ethnocultural communities in Montreal – one of the few of its kind in Quebec. She explained that the study demonstrated that economic and social factors create intersections that make immigrant and racialized communities more vulnerable to the negative impacts of the pandemic.

“Previous research has clearly demonstrated that all these factors intersect with racism,” said Hanley. “For instance, there are issues of systemic discrimination in the health system – we very sadly saw this in the case of Joyce Echaquan.”

The data the motion is pushing for, Hanley explained, is something health authorities elsewhere are already gathering.

While Manitoba is the only Canadian province to compile COVID-19 data on race, both Vancouver and Toronto, along with Peel Region located in the Greater Toronto Area, are also all focusing on collecting those numbers.

In addition, Rotrand explained that 20 states in the U.S. are requiring the collection of race-based data, which is used to make decisions regarding vaccine distribution.

“The collection of desegregated data on race, ethnicity and other socioeconomic factors is long overdue, and is essential if we are to concretely address and correct long-standing systemic inequalities in access to healthcare for our most vulnerable populations, including access to vaccines,” wrote councilor Rotrand in a press release about the motion.

Niemi hopes to see this motion create a change in mindset for government officials and policy makers when it comes to inviting Indigenous people to the table.

“It’s about time that the public health authorities on this island and at all three levels of government create a more sustainable and accessible structure to ensure that participation of Indigenous people into every level of service, program planning and delivery,” said Niemi.

“It’s a question of public health for all and especially for Indigenous peoples from coast-to-coast-to-coast,” he said.