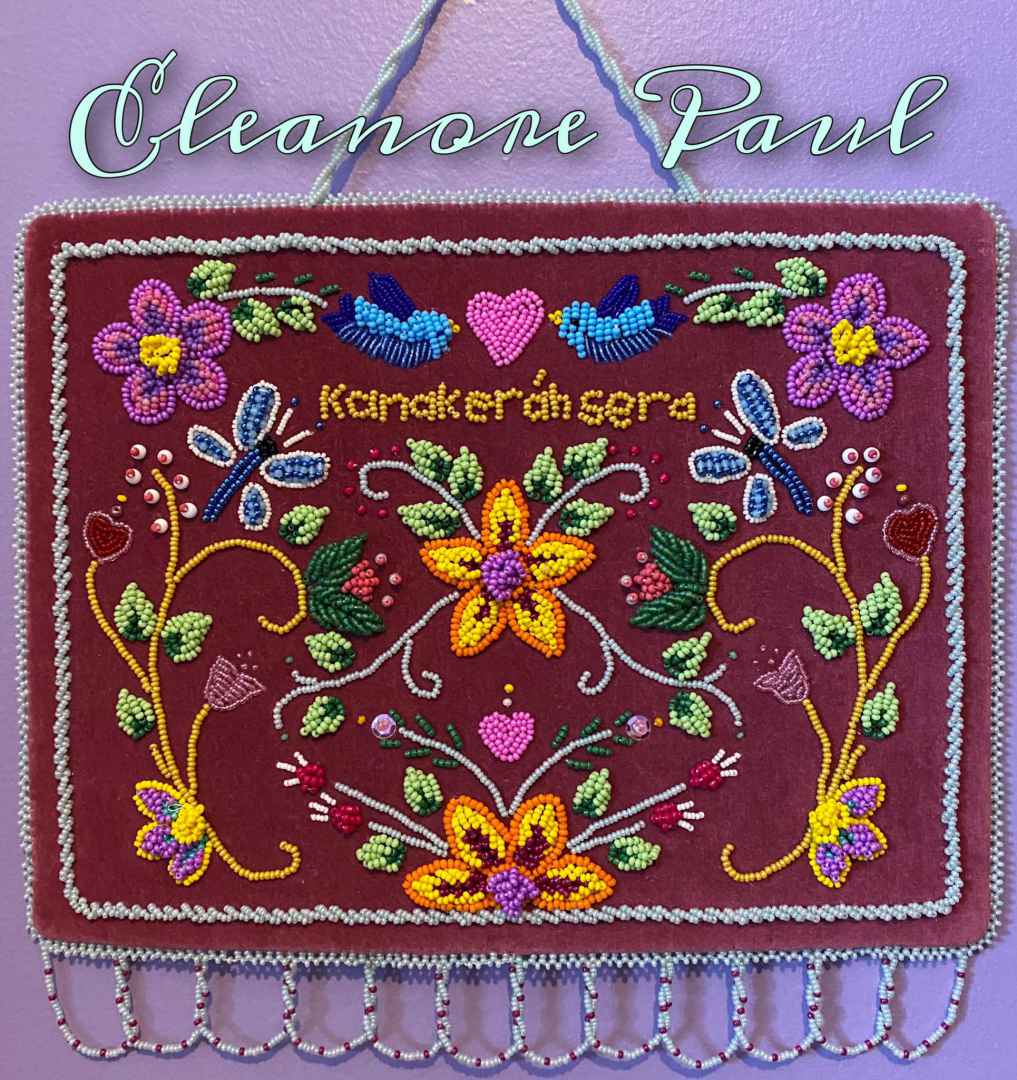 Kahnawa’kehró:non Eleanore Paul said the beadwork challenge brought back memories dating back to her early childhood, when she would watch her great-grandmother bead. “Back in those days, they used to beadwork pieces by the dozen and sell them to the various souvenir stores in Kahnawake,” she said.
“All those memories floated back to me.”

The month of January is commonly dubbed the worst month of the year, and with the addition of restrictions implemented in an effort to curb the spread of the coronavirus, Kahnawa’kehró:non Jessica Hernandez became preoccupied with the well-being of community members.

“It is a very long and lonely month for a lot of people,” explained the owner of Nicia’s Accessories, a local store selling craft supplies.

This feeling of distress and her unquestionable love for beading, compelled Hernandez to launch the Community Isolation Beadwork Challenge, a month-long initiative that invites residents to choose needles and beads over the often inevitable anguish of everyone’s situation.

The project called for community members to follow a meticulously designed pattern generously adorned with florals and birds, to create their own original beadwork – one precious little bead at a time.

It wasn’t long after sharing the challenge that Hernandez began receiving requests from people outside Kahnawake who also wished to take part in the initiative.

“I didn’t realize how many people actually needed this,” said Hernandez.

This is a feeling that Kahnawa’kehró:non Eleanore Paul said resonated with her and her many family members who also took part in the project.

“It was soothing to be doing this beadwork instead of being in isolation by yourself and all home alone,” said Paul. “Especially since right after the holidays, it gets kind of lonesome. This was until Jessica (Hernandez) offered this challenge to the community.”

With everyone from her daughters, step-daughter, son-in-law, grand-kids, and great-grandson participating in the beadwork initiative, Paul tweaked the name of the challenge and re-titled it her “family project.”

The great-grandmother said she was heartened to witness the youngest in the family have a go with the craft.

“Even my great-grandson who is two going on three, tried to string some beads when he saw his mom and his grandmother doing beadwork,” she said with fondness.

The creator of the challenge said she had always intended for people of all levels of experience to participate.

“Some people were seasoned beaders and some people were beginners. It didn’t really matter what level you were at, everybody was just supporting one another,” said Hernandez. “Everybody would comment on each beadwork picture (on Facebook). It was almost like a support group.”

Support is exactly what Paul said she received from her family throughout the 31-day-long challenge. “We were on the phone every day; encouraging, supporting and sharing amongst one another.”

In the same vein, Onkwehón:we challenge partaker Teres Seymour said it was the overall spirit brought about by the project that she relishes the most.

“I actually felt like I was in a better mindset after a night of beading,” said Seymour, who is from Akwesasne. “It was a distraction from all these other things.”

The Kanien’kehá:ka woman pointed out that like community members in Kahnawake, she too has had to deal with more arduous directives.

“On the Canadian side of the reserve we have a curfew at 11 o’clock and a restricted travel radius of 100 miles,” explained Seymour.

The curfew Seymour is subject to as a resident living on the Quebec side of the community has been in place since November – long before the province-wide restriction, which began on January 9.

Seymour said that she is strongly considering taking part in the February challenge in an effort to continue combatting the isolation brought forth by these measures.

Hernandez explained that the second challenge, which began on Tuesday, will allow for participants to bead the newest pattern which she designed, or finish a project of their choice. At the end of the day, all that matters to the artist is that participants are being mindful by grounding themselves and learning to be patient.

“As a beader, as a sower or as a crafter, everybody has projects that are sitting in a pile somewhere and those projects can sit there for years,” said the accomplished beader.

“I’m even going to have a special prize that I haven’t announced yet which will be for the oldest unfinished project,” said Hernandez.

With 104 submissions from beaders in Kitigan Zibi Anishinabeg Nation, Six Nations, Akwesasne, Kanesatake and Kahnawake, the success of the first challenge cannot be understated.

Paul said that in addition to being grateful for sharing this experience with her immediate family, she found it heart-warming to be able to incorporate her mother who had a gift for the intricate artwork.

“My daughter had a pill container of beads that my mother had given her long ago, so she shared those beads with each one of us doing the challenge,” she explained. “We incorporated her beads into each of our work and put a little bit of her in there also.”