You are here
Home > News > Cleaning up the fallen pine trees 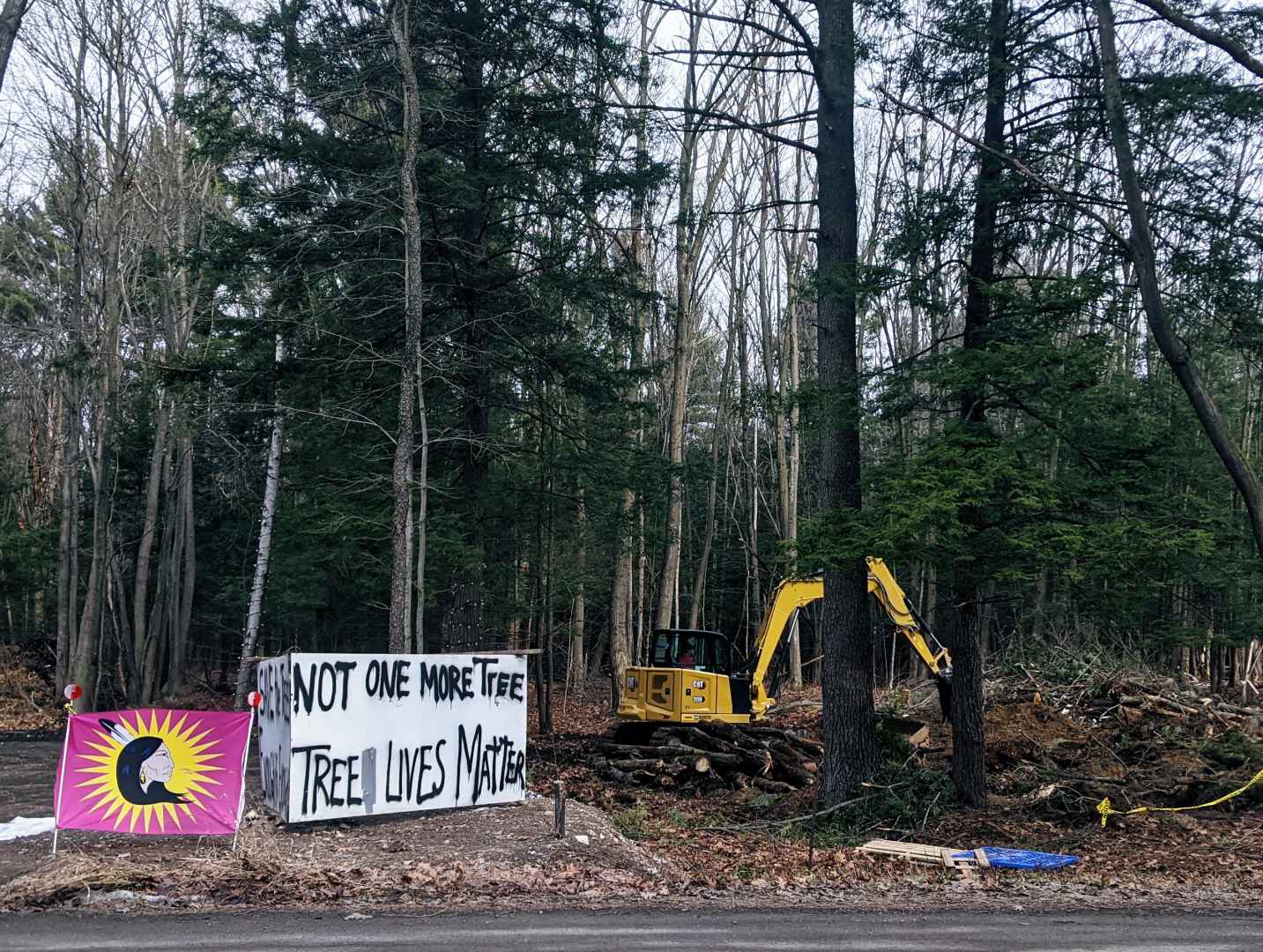 The Pines have been the centre stage of ongoing tensions since 1990 and the forest continues to face threats from within the community.

Apprehension clouded the atmosphere, as the women in the community continue to peacefully object the overdevelopment in the Pines for the past two weeks.

However, this time around, it was a Kanehsata’kehró:non who took it upon himself to clean up and restore, an alternative to cutting down more sacred pine trees.

As the owner of AAAA’s Smoke and Cannabis store along Route 344, Reuben Nicholas has been sitting in the front row of tensions over illegal development that reached a boiling point on Tuesday, November 17.

As previously reported in The Eastern Door, on that day, community member Todd Simon decided to clear-cut a portion of the forest between Big Chief’s cannabis store and Reuben’s, hoping to start his own business.

While Simon wasn’t the first one to disregard the 2010 moratorium that was put in place in order to protect the Pines, he was rapidly met with contestation and disapproval from the community.

A women’s group of Kanesatake, who ask to be referred to as The People, mobilized to block the development site. Since then, Simon hasn’t been seen on the site, either to continue construction or to help clean up the dead trees that remained lying on the ground.

“This kind of environment is no good,” said Nicholas, pointing to the desolating site next to his shop. “We want to improve this land in Kanesatake, not to make it look like a scrap yard or some kind of a dumpsite, you know?”

Worried that it was Simon resuming his construction with more tree cutting, a few land defenders stopped by Nicholas’ shop on Monday morning. They were reassured and he confirmed that he offered to clean up and watch over the land.

“Reuben is 100 percent for the beauty of Kanesatake,” said one of The People’s members.

The 70-year-old man is no stranger to Kanehsata’kehró:non anger when it comes to the development in the Pines. Earlier in October, Nicholas faced the same disapproval as he started to cut down trees in front of the Lacrosse field, on the lakeside, also looking to build his own smoke shop.

“I didn’t consult anyone,” said Nicholas in a previous interview with The Eastern Door. “I got fed up to see we don’t have anything left.” However, Nicholas was stopped by the provincial police as he was cutting trees on what is considered municipal land presently.

Seeing how it sparkled conflict within the community, Nicholas decided to take another route and bought AAAA’s Smoke and Cannabis store.

He said that this time, it felt wrong to watch another community member destroy the Pines. Nicholas felt compelled to clean it up, and wanted to “help Mother Earth.”

“Don’t just put trees down and waste it, use it,” he said. “We take what we need and give back.”

Nicholas said that the cleanup plan, once completed, includes having picnic tables for people to come and enjoy the Pines.

He added that this is what Kanesatake should be about, impressing visitors enough to build a strong economy, while respecting nature.