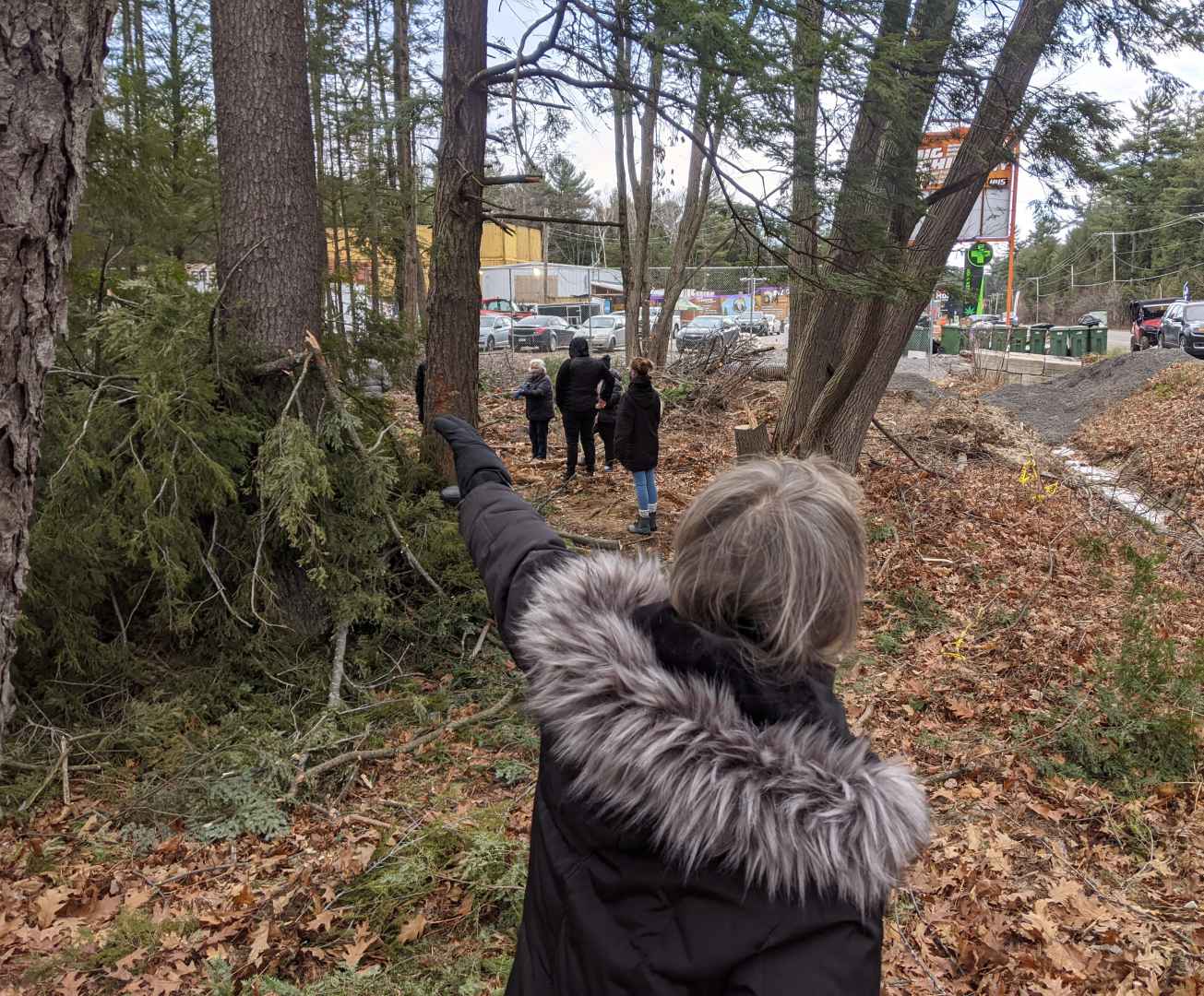 Cutting trees and destroying the land was exactly what Kanesatake and Kahnawake fought against in 1990.

Once again, Kanehsata’kehró:non women stood together, determined in the cold over the wounded Pines, as they came together to protest against illegal tree cutting.

The demoralizing sight of chopped up trees was the result of yet another community member wanting to develop a business, as many did before him.

“Here, we are destroying in the name of economic development,” said land defender Nancy Gabriel during the protest.

On Wednesday morning, November 18, more than 10 community members gathered along the forest after the news broke the night before that another smoke shop was being constructed without permission in Kanesatake.

Less than 24 hours later, the message from the land defenders was clear and united.

“Where are our values?” questioned Julia Kanathiiostha Lazore, another Kanehsata’kehró:non who was protesting her frustration.

Various sources from the community started to report Kanehsata’kehró:non Todd Simon, as they witnessed him cut down trees on Tuesday afternoon, next to Big Chief’s cannabis store. This was in complete disregard for the moratorium set on the land.

Any development needs to obtain consent from the Mohawk Council of Kanesatake (MCK) before any kind of tree cutting may occur.

Back in 2010, an agreement between the Municipality of Oka and Kanesatake was made to put a halt on all development from both communities along Route 344. The promise was made after a heated confrontation took place over the land bought for real estate, which resulted in land developer Normand Ducharme from Norfolk Financial being escorted out of Kanesatake by the provincial police.

However, the land defenders pointed out that the moratorium was never respected.

Among them, Lisa Gibson was more than just upset by the situation. Exhausted by this disrespect, she explained that people need to get together to put the 2010 agreement in motion.

While he condemned the acts of Simon, Kanesatake’s grand chief said this behaviour was likely due to frustration with his financial situation. Chief Simon said, “(he was) taking some land, as everybody did. They always blame each other, saying that one person did it so they could do it too, or that they give back to the community, but I don’t see it happening,” said Simon.

He explained that the lack of policing enforcement in the community allowed such developers to continue without permission.

He said that policing needs to come not only with economic development, but also with better education, to have “a shot at developing a better life.” Otherwise, it can be hard, according to Simon, to justify the need to bring in the police who would enforce poverty.

“These are the pillars we need to work on. We are so close to getting it done, but this keeps going and it’s getting worse,” said Simon.

In addition, while the land defenders were gathering, they received information that only a few metres away, another smoke shop owner was digging and cutting trees. They were quick to mobilize and headed to Chez Ti-Goof to demonstrate their disagreement.

The owner explained that he was simply looking to annex his two stores next to each other and was clearing the way. He refused to comment on the situation.

By Wednesday night, after the land defenders met at the Longhouse to discuss further actions, a fire was set up where the women were standing up earlier that day. They were asking the community for donations of firewood to show support.

But it’s the fear of losing the essence and beauty of the Pines that will ultimately keep the flame burning throughout the night.

“I was here standing up and defending the land in 1990,” said 69-year-old Sheila Jacobson.

As she glanced at the remaining dead trees on the ground she said with defeat, “there is no more soul.”