Skawennati first produced the collection of outfits for her virtual avatars. This year she created the same collection for the real world, bringing the digital and fabric versions together into one space.

The artist said that the collection was influenced by different events, including her experience at Indigenous Fashion Week Toronto (IFWT) in 2018 and the 2019 Global Climate March.

“I didn’t think I could do a fashion show in real life, but I knew I could make a machinima fashion show,” said Skawennati.

She is best known for her machinimas (movies made in a virtual environment) and making art that addresses history, the future, and change from an Indigenous woman’s perspective.

Last month, she was named one of the 2020 Smithsonian Artist Research Fellows. Through her research, will try to uncover the origins of the ribbon shirt.

“I have had the idea for a long time. I have seen a lot of stuff being done with camouflage and the Mohawk people,” she said.

“I also have thought a lot about ribbon shirts. I have seen the innovation that people do, like where they place the ribbons and how many.”

She said she thought it would be cool to have ribbon shirts that were made from camouflage fabric and army pants made of calico.

Then she started making a collection for her avatars.

Skawennati and her team used Marvelous Designer to create her virtual collection, a 3D software used by many artists to create dynamic 3D clothing for the digital world.

“I realized that these avatars should hold protest signs, and then in 2019, the call came out from Indigenous Fashion Week 2020,” said Skawennati.

And unlike some of her other costumes in cyberspace, these were just shirts and pants, and she knew how to sew.

She applied to IFWT, was accepted and began to sew.

“I had already designed the digital fabric and patterns. They are my own camouflages and calicos,” she said. “And then I decided to print that fabric, and I found some commercial patterns that I could modify. I knew how to sew, but I definitely had to learn a lot.”

The fashion show for IFWT 2020 was supposed to be in May, but it was postponed and later significantly changed because of COVID-19.

“They (IFWT organizers) asked us to send our outfits to them, and they hired models who were then filmed. A movie will be happening in November (2020),” said Skawennati.

The artist finally finished her fabric collection in August.

Skawennati, who has been an activist since the 80s, was inspired by a protest sign she saw at the climate march that said, ‘I can’t believe I have to protest this shit.’ 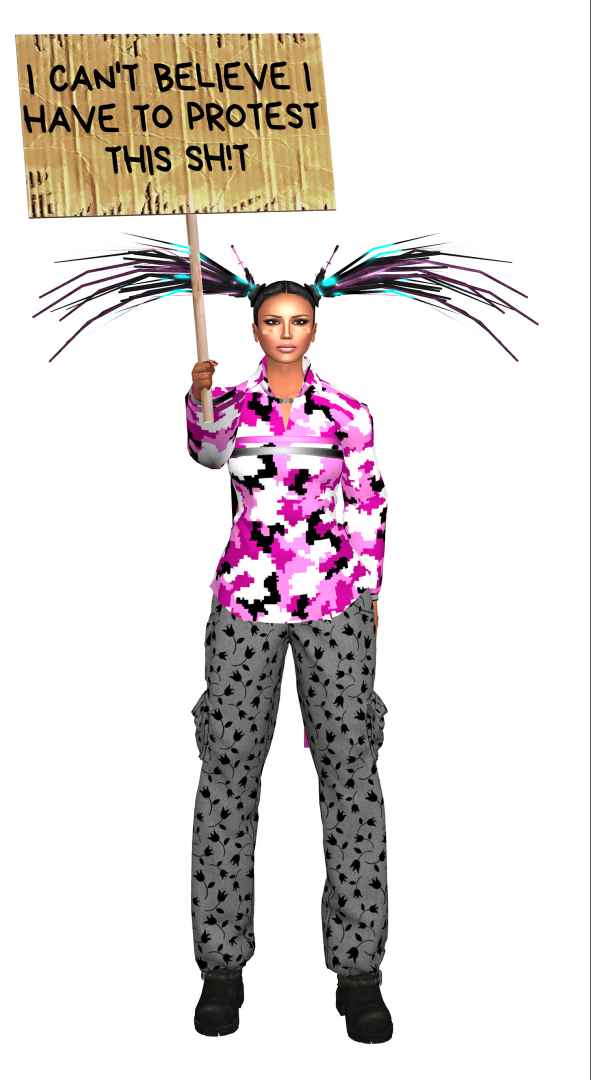 “It started with that sign, and then I went upwards and onwards. I wanted to have signs in Onkwehon:we’néha. I have ‘The Future is Aboriginal’ in English, French and Kanien’kéha, and it means ‘We are coming. We are returning! Get ready!”

Skawennati was the first exhibition at ELLEPHANT in October 2015, according to Christine Redfern, the director and curator at the gallery.

“This exhibition is important because it highlights the role of fashion in Skawennati’s body of work, and how fashion speaks of both culture and who we are as individuals,” said Redfern.

“It is also important as Skawennati’s artworks reflect the times and concerns that we are living through now,” she continued.

So, what does this exhibit mean?

“Resistance is fertile – it is to show that we are still here and still fighting,” said the artist.