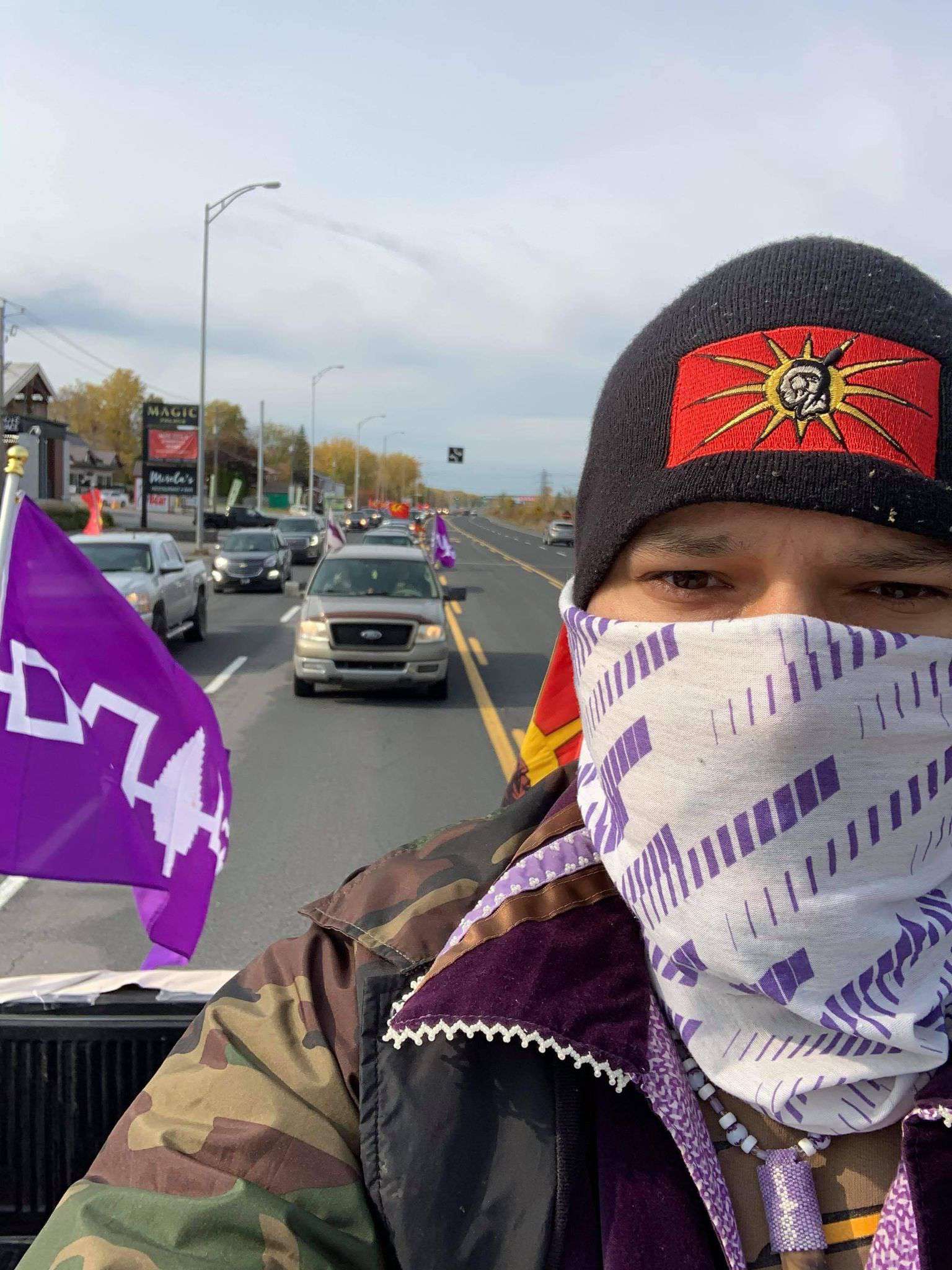 Kahnawa’kehró:non came together and held a rolling blockade on Sunday afternoon to show support and solidarity for Mi’kmaq fishermen, as the crisis over Indigenous fishing treaty rights escalates in southwestern Nova Scotia.

Just after 1 p.m., a 39-vehicle convoy left the green space near the Mercier Bridge on Highway 132 and drove to the boundary of St. Constant.

Once they reached the boundary, they turned around, heading west on Highway 132 and onto the service road underneath the Mercier Bridge to Highway 138.

The dispute in Nova Scotia turned violent last week (October 14), when a group of about 200 non-Indigenous commercial fishermen ransacked a lobster pound in New Edinburgh where Mi’kmaq fishermen store their catches.

According to the RCMP, a similar raid took place five hours later in Middle West Pubnico, where employees were blocked from leaving a lobster pound as rocks were thrown and a van was set on fire.

During the Middle West Pubnico incident, two Mi’kmaq fishermen were threatened and barricaded inside the facility. The men reported seeing thousands of pounds of Indigenous-caught lobsters destroyed.

Kahnawake showed support for the Mi’kmaq fishermen and stood in solidarity with them. The convoy reached the boundary with Chateauguay and turned around, ending back on the green space where the People’s Fire continues to burn.

Before the rolling blockade began, organizers of the grassroots group People’s Fire read a statement to the media and said they had been watching the violence and intimidation unfold in Nova Scotia.

“We solemnly urge the Canadian government to hold its citizens accountable,” the statement read. “Over the past few weeks, we have once again observed how ethnicity can play a part in whether or not justice is served, and agreements upheld and protected by the colonial governments.”

Wenhniserí:io Sage Isaac, who drafted the statement and called a meeting last Friday (October 16), said that he felt compelled to do something because things have gotten out of hand in Nova Scotia.

“The so-called Canada government has been trying to kill us off for a couple hundred years now,” said Isaac.

“The RCMP is rooted in racism and has been the enforcers of the crown and its genocidal agenda, so their complacency in these matters is not really a shock to me,” he continued.

Last Saturday (October 17), images and videos circulated online of a large fire at a lobster pound in Middle West Pubnico. The fire destroyed the facility of the Mi’kmaq fishermen.

The RCMP has come under heavy scrutiny from Mi’kmaq communities and Indigenous leaders across Canada for their apparent inaction during the series of violent incidents over the last week.

Isaac, whose father is Mi’kmaq, said that it is important for all people, including Canadians, to support these types of movements. He said many people don’t realize that what affects one community, impacts all communities.

“I’ve spent my whole life fishing and being out on the river, and I couldn’t imagine my reaction to a mob of non-Natives trying to tell me I couldn’t fish,” said Isaac.

Don Barnaby, who is Mi’kmaq and has lived in Kahnawake with his wife Candia for many years, said that he was overwhelmed by all the love and support Kahnawake has shown the Mi’kmaq community in Nova Scotia.

“We have been struggling to travel to support the frontlines, with New Brunswick shutting down the borders,” said Barnaby.

“The RCMP is doing nothing to help the Mi’kmaq. Once again, they side with the colonizers. There is anger and frustration, but we are trying to be peaceful,” he continued.

The couple who own Healingstiches, a clothing design online store, raffled some of their pieces and raised $1,200 to buy supplies and trap lines for Mi’kmaq fishermen.

He said the display of support showed on Sunday made him proud.

Mohawk Council of Kahnawake (MCK) chief Frank McComber participated in the rolling blockade and said that you could feel the energy of support in the air.

“I think all of Canada is feeling anger towards what is going on in Nova Scotia. Having this rolling blockade was just a fantastic idea,” said McComber.

He believes that if the Indigenous fishermen perpetrated the same actions as the commercial fishermen, they would either be in jail or dead.

“I think it is really frustrating for our community members right now,” he said.

Katsenhaiénton Lazare and his brother also took part in the rolling blockade and said that his family and community have always supported the rights of Onkwehón:we.

“We do this just to let our brothers know that they’re not alone, that we hear their voices. RCMP, Nova Scotia and Canadian governments, they don’t listen to our voices, and we ought to show the Mi’kmaq that others can,” said Lazare.

At an emergency debate in the House of Commons Monday, prime minister Justin Trudeau condemned the acts of violence against Mi’kmaq fishermen and said the community has a treaty right to fish “without being subjected to threats or racism.”

During the press conference, Miller said the RCMP in Nova Scotia have failed to properly protect Indigenous peoples.

“Indigenous people have been let down by the police, those who are sworn to protect them,” said Miller.

Miller told The Eastern Door on Tuesday that things have calmed down after the deployment of additional officers to the area.

“First and foremost, sitting down and discussing with chief Sacks (Michael Sacks of the Sipekne’katik First Nation) and his community, as well as the Assembly of Nova Scotia Mi’kmaq chiefs, about how a moderate livelihood looks and how it is protected,” said Miller.

Multiple gatherings and marches in support of Mi’kmaq fishermen have been planned and will take place over the next few days and weeks to come.