You are here
Home > News > Controversial consultation over the Pines 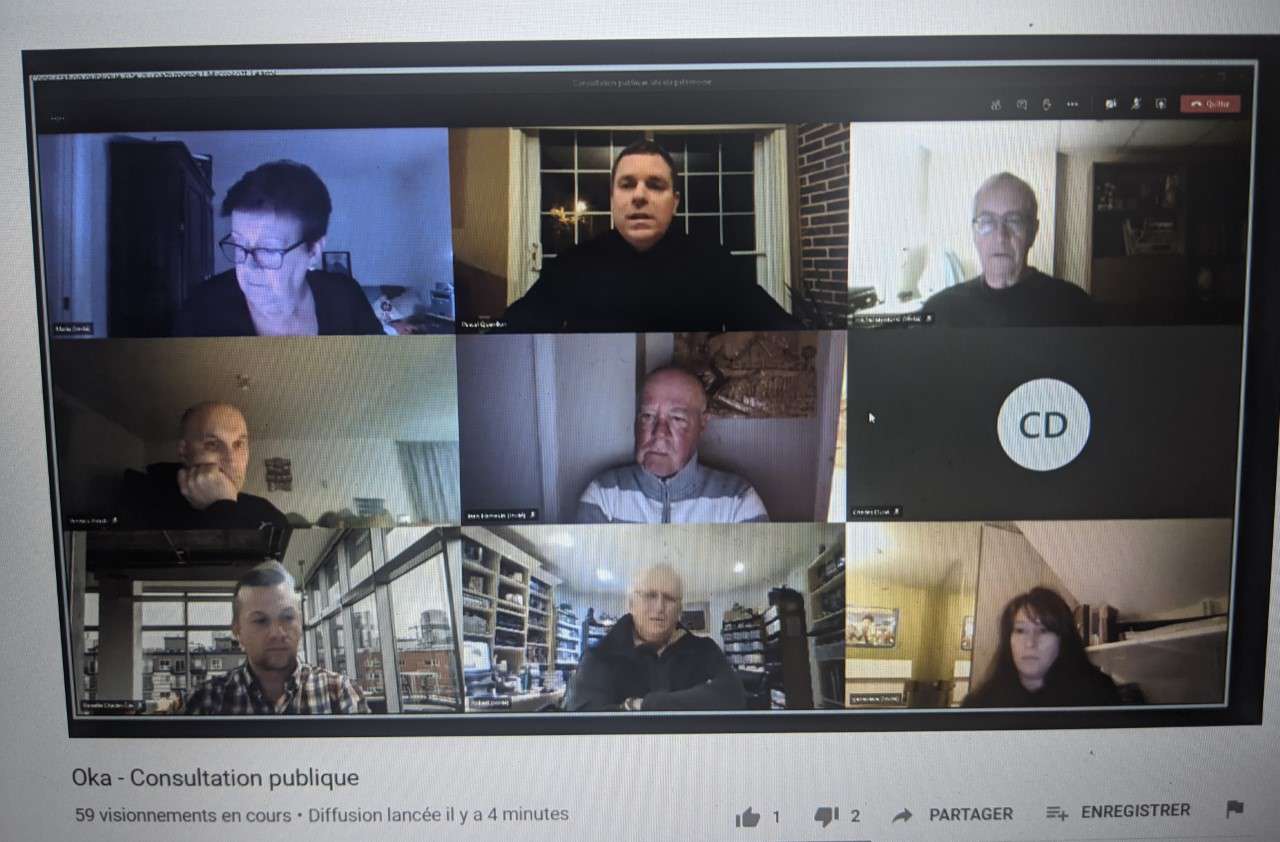 “Look at all these colonizers, you should all be ashamed of yourselves,” read the very first comment of the night, setting the tone for the rest of the evening.

The municipality of Oka hosted a live public consultation in front of 90 people on YouTube, to discuss its intention to turn the Pines into a heritage site.

In a video call on Monday (October 19), nine members of the Oka Council presented the project in an hour-long conversation, and answered questions received via the online chat. No representatives from Kanesatake were present, a fact denounced by many viewers.

“This land is not yours to consult over, it is stolen and unceded Kanehsatake land,” said one of the critics, a message that was clearly shared by many.

The Pines have been at the centre of much tension for the past 30 years, as land claims were never truly resolved after the Siege of Kanehsatà:ke.

In the proposal, Oka calls upon the Quebec Cultural Heritage Act that grants municipalities the power to name a portion of its territory as a heritage site in order to protect it. In the event that the motion would pass, it would prohibit any development and modification of the forest without prior authorization from Oka.

Protecting the Pines was already a subject of discord before the municipality first brought forward its intention to transform it.

On October 6, new zoning was introduced by Oka which designated the Pines – excluding the Golf Club – and lands owned by Grégoire Gollin as an environmental conservation area. The change came without consulting the community nor the private landowner.

Back in 2004, Gollin purchased part of the Pines, which later changed to his intention to transfer 70 hectares back to the community – an initiative known as an eco gift. Mohawk Council of Kanesatake (MCK) grand chief Serge Otsi Simon signed an agreement in June 2019 with Gollin, in which the latter promised not to touch or sell any more of his lands until the MCK received full consent from the community on the donation. The agreement has also been causing tensions and disagreement as the Rotinonhseshà:ka of Kanehsatà:ke (Longhouse) are opposed to it.

“We don’t have any land to claim, it belongs to us,” said spokesperson of People of the Longhouse Ellen Gabriel in a previous interview with The Eastern Door. “This must stop. This land is not for Oka to claim as its own cultural site.”

The MCK has until July 2021 to hold a referendum with the community on the issue. The eco gift would offer the creation of an Indigenous protected conservation area (IPCA), if it were to be accepted.

However, the municipality believes itself to be in a better position than the MCK to protect the Pines, according to Oka mayor Pascal Quevillon. On Monday night, the mayor used the example of the G&R Recycling site, explaining that the band council allowed it to become an “environmental crisis,” without intervening and regulating it properly. It has been polluting and operating outside of both the MCK and Quebec government permit regulations since 2016 – causing respiratory problems, nose bleeds and headaches for the surrounding population.

Quevillon also denounced the construction of cannabis shops along Route 344, referring to the situation as worrying and out of control. He drew a comparison between the current situation and the fact that before those lands were bought by the federal government and handed to the community after the Oka Crisis, they were part of Oka territory.

“We saw what happened once they became federal lands,” said Quevillon during the live-consultation. “If the forest becomes the propriety of Kanesatake with the eco gift, and since the Mohawk Council doesn’t control what’s going on on its territory, what’s going to happen then?”

The MCK grand chief feels that the municipality is pointing fingers, when really the community is just reacting to poverty imposed by years of a colonial system.

“It’s an act of systemic racism,” said Simon. “That’s all there is to it.”

Simon explained that the economic situation in the community, for as long as he can remember, has been non-existent. He’s been repeatedly requesting that the federal and provincial governments provide them with the right resources – such as a police force or environment officers to protect the community and head towards a healthy and flourishing economy.

“People are getting fed up and do what they have to do for a living and get out of poverty. It’s not always done the right way. But the mayor looks at this and uses it against us.”

Simon asked Kanehsata’kehró:non to boycott the consultation on Monday night as he didn’t want to legitimize Oka’s initiative. He also reiterated that his agreement with Gollin – which he said was an act of reconciliation – was the way forward.

“He saw the historical injustice and he wants to do his part,” said Simon.

As the main title owner of a part of the Pines, Gollin said he was asked to take part in Monday’s meeting, but refused.

While Oka municipality claimed to have received Gollin’s approval on the heritage site’s proposal, the land developer declined to take a position. Gollin said that the real debate regarding the future of the Pines should be in the hands of Kanehsata’kehró:non only.

“I’m very uncomfortable in this situation,” said Gollin. “This is adding oil to the fire.”

More recently, Quevillon was the target of vandalism. On Saturday, October 17, rocks were thrown at his car and house while three greens were destroyed at the Oka Golf Club, resulting in more than an estimate of $100,000 in damages. The mayor publicly alluded to the tensions between the two communities as the reason.

“This thing has to go through an investigation before you start pointing fingers,” said Simon. “It could have been a frustrated citizen of the village that did it.”

The Surete du Quebec (SQ) confirmed that the ongoing investigation had no lead suspect yet.

The Rotinonhseshà:ka of Kanehsatà:ke launched a petition the day after the YouTube consultation. On Wednesday, it had already collected close to 700 signatures.

“The story of the last 30 years has been that of systematic land theft by the Oka municipality,” said the petition. “In 1990, the municipality wanted to cut down the forest. Today, it pretends to protect it. We conclude that this is not about the Pines. The Oka municipality cannot come to terms with the rights of the Kanehsatà:ke community.”

In addition to the petition circulating, the grand chief is pushing for legal action. Simon said he contacted the regional chief of the Assembly of First Nations of Quebec and Labrador, Ghislain Picard, wishing to gather support for other communities to bring the issue to the Supreme Court of Canada.

“We need to fight in the same direction,” said Simon.