You are here
Home > News > Second wave lockdown is here 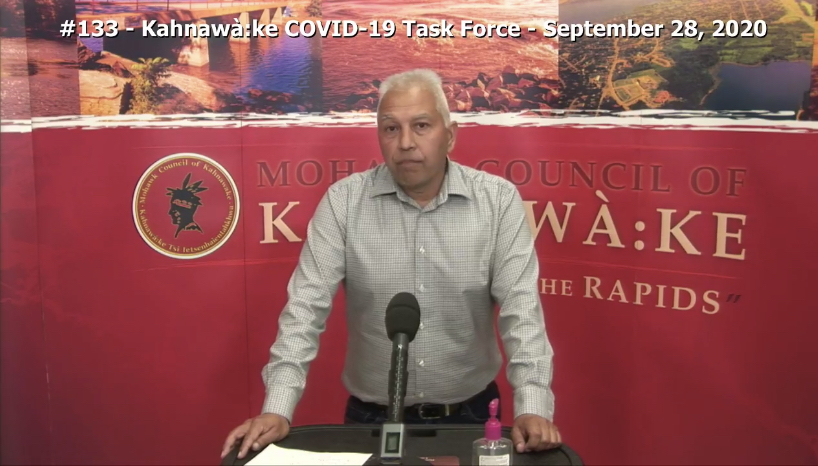 Kahnawake has entered the second wave of the COVID-19 pandemic, and as of Thursday morning, the community was elevated to the red alert status, causing more restrictive measures.

“A lot of tough decisions had to be made in a very short period of time,” said Lloyd Phillips, the commissioner of Public Safety and lieutenant commander of the Kahnawake COVID-19 Task Force.

“Based on the indicators and what is happening in Quebec, we believe that Quebec has lost control of the containment of the virus. And as such, with all the elements within our community taken into consideration, we had to decide quickly if we moved to red,” he said.

As of Wednesday, the community had five active cases according to Dr. Annick Gauthier.

“It doesn’t mean that everything within the red zone is done immediately. There could be areas in there that could be phased in over a period of days or weeks. We are hopeful that by taking some initial measures, we won’t have to add more restrictions,” said Phillips. 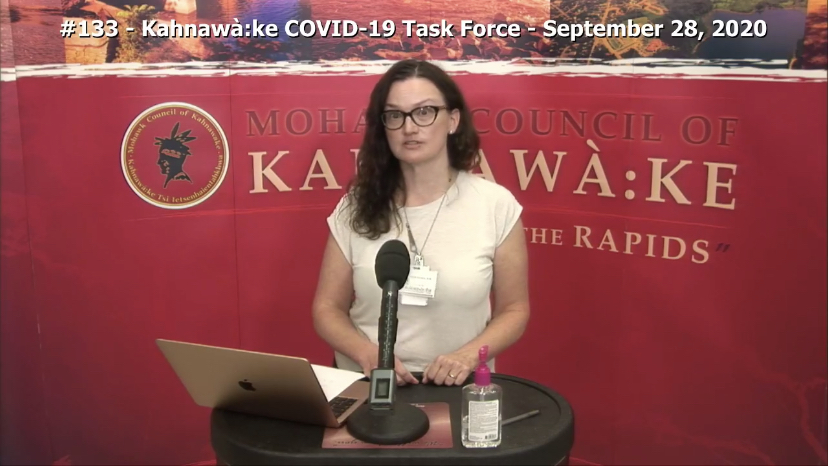 According to the commissioner, the colour-coded chart, which was introduced last week, was drafted over the summer and finalized a few weeks ago.

The new measures include limiting private gatherings to a maximum of six people.

Public gatherings are prohibited, with exceptions for a maximum of 25 people for events like funerals, support groups, religious or ceremonial gatherings, and others subject to Task Force approval.

Although there are currently no stay-at-home directives, people are strongly recommended to stay within their household as much as possible.

Phillips said that there is now a travel restriction between regions, and community members are being advised to avoid unnecessary travel.

Travel to Tio:weró:ton is, however, allowed at this time.

The Kateri Memorial Hospital Centre’s (KMHC) executive director Lisa Westaway explained that the five positive cases constitute a high percentage of transmission, which raises the likelihood that there is community transmission and the possibility of other cases in Kahnawake that haven’t been identified.

“It is important that if you need to get tested that you do so at our testing site because we get results faster,” said Westaway.

As of Thursday, KMHC, the Turtle Bay Elders’ Lodge and Independent Living Center, do not accept visitations except for natural caregivers and end of life visits.

Organized sports have also been shut down.

“Effective October 4, businesses in the following areas will have to cease or modify operation,” said Phillips.

Those businesses include restaurants that must close their dining area and move to delivery or takeout services only.

The recently opened Cigar Lounge will be required to close down along with the different gaming establishments in the community.

“The rationale behind these establishments is that there is a gathering component to it where people have to come together in relatively short proximity with one another, where it has been proven that it has been the source of the majority of the transmission of the virus,” he said.

According to Phillips, other businesses will remain operational, and the Task Force inspections will be enhanced.

However, that can change if the situation worsens, and a new phase of restrictions is introduced.

“We call upon business owners, managers and employees to be extra vigilant to make sure that the measures that are in place are enforced so that we don’t have further closures in the community,” he said.

In addition, people are asked to take down phone numbers, time of entry and exit, and ensure mask wearing of all visitors to their homes.

Schools will be moving to remote learning as quickly as possible, but will remain open for vulnerable students and those without access to appropriate WiFi technology, as well as for children of essential service workers. Daycares will also continue to operate as usual at this time.

The Mohawk Council of Kahnawake (MCK) sent out a release Wednesday asking community members to stop shaming, bullying and scapegoating people who have tested positive as it might discourage others from getting tested.

The Task Force is trying to balance the social well-being of the community with the economic needs of individuals and businesses by implementing a phased approach, according to Phillips.

“We are reaching out to the community for your understanding. We are all in this together. It is a very trying time for everybody, including members of the Task Force.,” he said.