You are here
Home > News > First powwow during COVID-19 pandemic 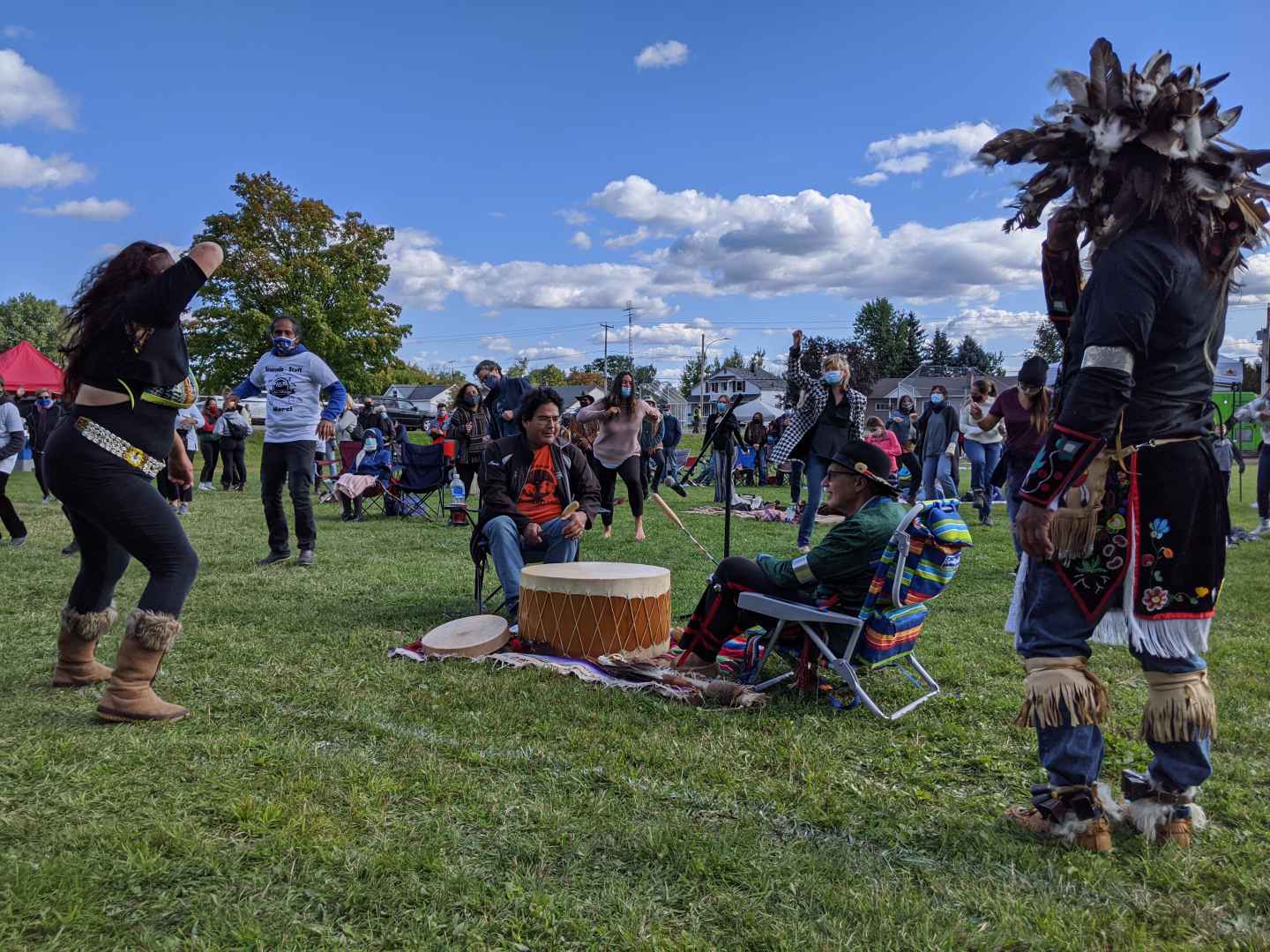 As the sun shone down on the gorgeous regalia, and the silver jingles reflected the light while the wind was blowing the dresses back and forth, just for a moment we forgot about the pandemic. 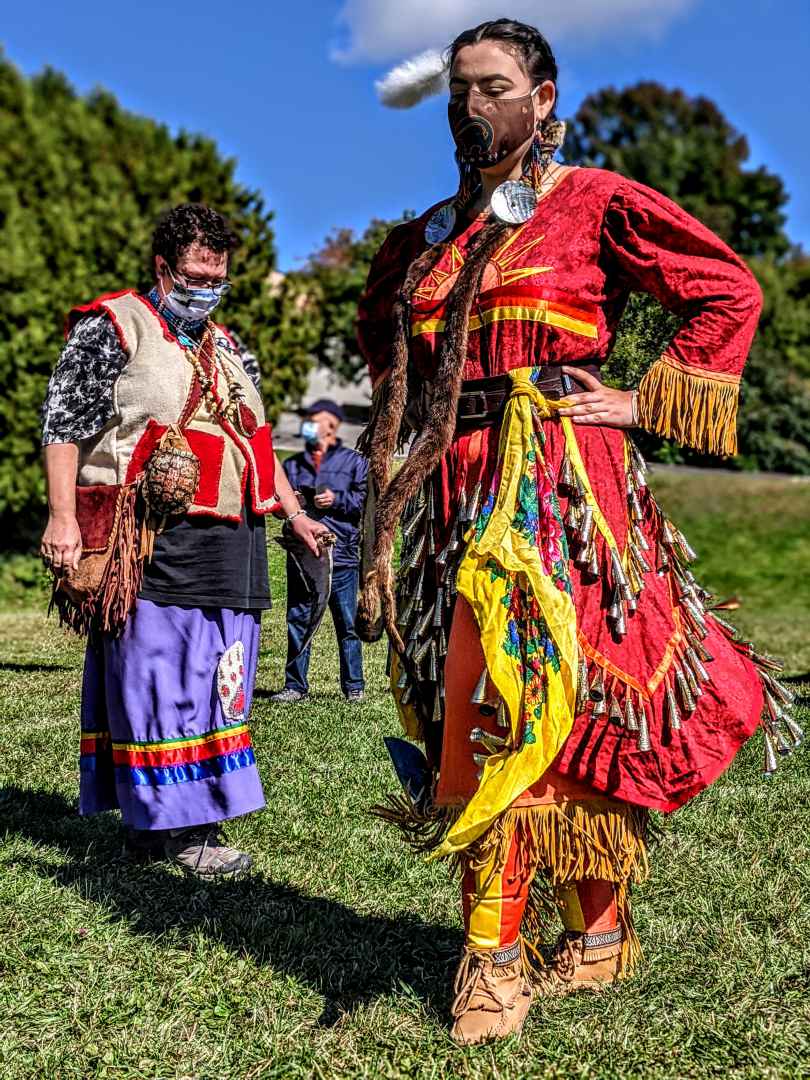 Despite a second wave, dancers and drummers from all over gathered for a brief afternoon on Saturday to celebrate the eagle and condor union.

On September 19, a day after the Quebec Public Health authorities announced new measures to counter the spread of COVID-19, the first powwow of the year took place in Grenville-sur-la-Rouge.

Al Harrington, the organizer from Shoal Lake 39 First Nation, said he wasn’t expecting a lot of people to show up. Many cancelled on him due to the virus, yet it didn’t stop him from offering the healing ceremony.

“Any type of gathering that brings us together to share happiness and joy with one another, it really changes a person,” said Harrington, who lives in Kanesatake. “I think everybody got a taste of that with this smaller powwow.” 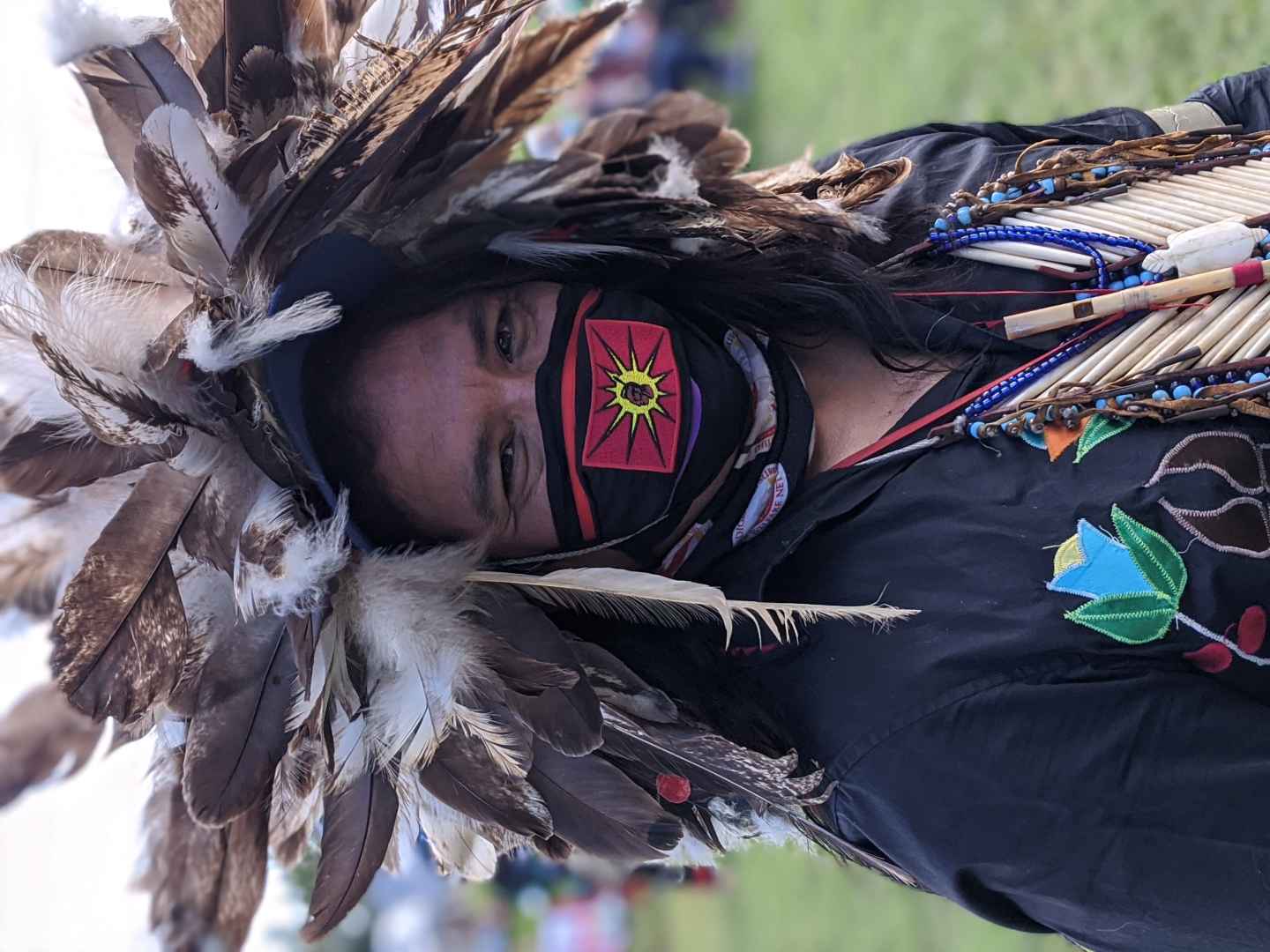 More than 100 people attended the event, which was also a collaboration with Fiesta Agriculturelle, an event organized by the Centre de l’Immigration en Region. The festival presented various artists such as Mi’gmafrica, a cultural jam led by Valérie Ivy Hamelin from the Gespeg First Nation, and Sadio Sissokho from Senegal.

As the day celebrated different cultures, it allowed for an interesting fusion of African beats and Indigenous rhythms.

“It’s beautiful to witness,” said Ron Moran, municipal councillor of Grenville-sur-la-Rouge. “People organized it all by themselves! I’m responsible for the culture here in Grenville, and nothing could be more cultural than seeing this inter-mixture today.”

Even though he said the mix of music was good, Harrington was hesitant about the combination of certain cultures that are more prone to drug and alcohol – none of which are allowed on the grounds of a powwow. 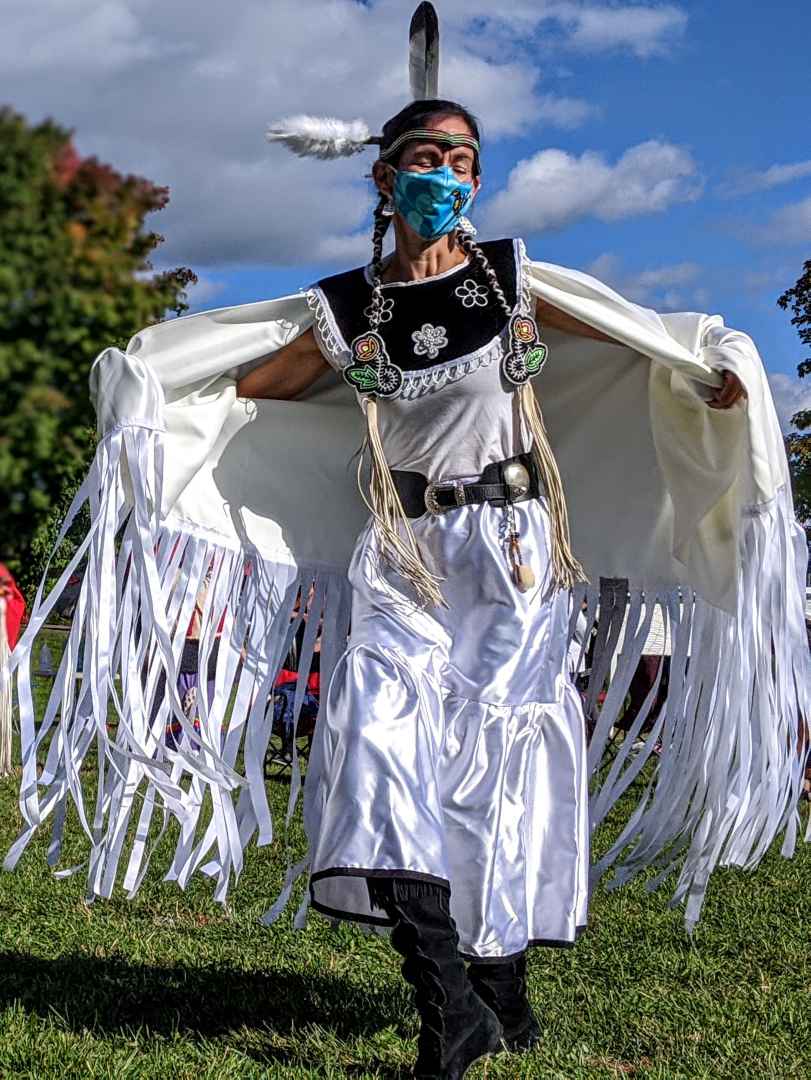 Throughout the day, the sight of beautiful regalia was challenged by a reality check as people were also wearing masks, one of the preventive measures onsite.

“Everybody was looking after each other,” said Harrington. “I only had to tell one person about the mask situation and she didn’t give any attitude.”

Most attendees said they hesitated before coming to the event, but were glad they chose to come.

Eight vendors were selling arts and crafts, Chelsea Brosseau, from Akwesasne, being one of them. She was looking forward to enjoying a day out at the powwow and the artist drove all the way from Ottawa to display her own laminated drawings, representing strong womanhood.

While Brosseau stood behind her kiosk appreciating the music and selling her art, other women gathered around Harrington’s drum circle, joined by singers and drummers Jesse Achneepineskum and Borislav Angiozov.

At the centre of the group was Barbara Kaneratonni Diabo, proudly wearing her newest white regalia. The 51-year-old dancer from Kahnawake explained that after all the powwows being cancelled throughout the summer, this one was much-needed.

“As I was dancing, that memory came back of looking at the sky and feeling the wind,” said the dancer. “It was really nice to dance to a drum again.” 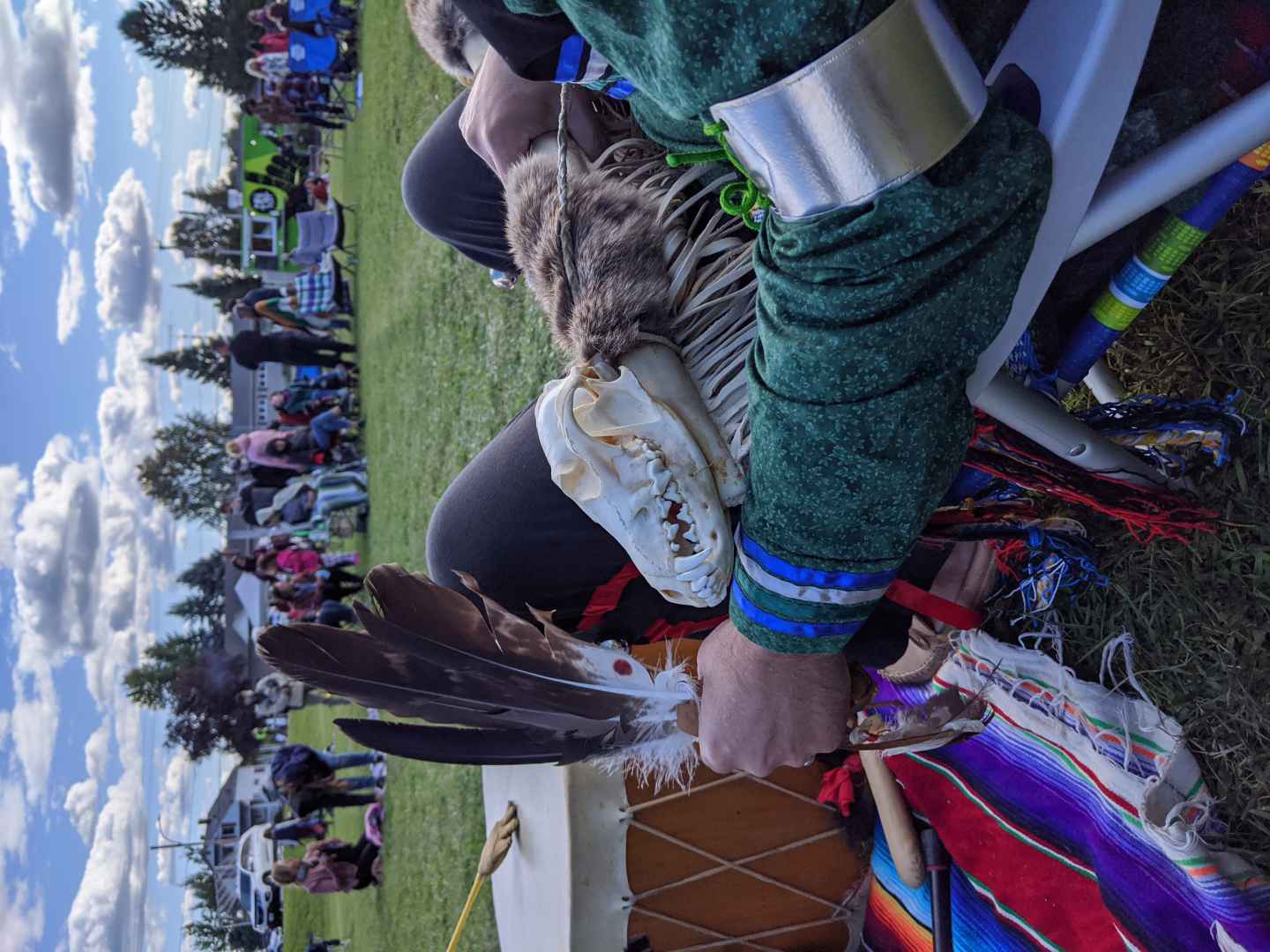 The performers offered various traditional dances, including the intertribal dance open to everyone at the gathering. But it was the crow dance that resonated the most as 18-year-old Sophia Sidarous showed off the impressive cones and jingles she put on her regalia herself. “For me, a powwow is more a ceremony than a festival,” said the Mi’kmaq woman from Metepenagiag First Nation. “It’s a time to heal and gather as a community to make sure we are strong together.”

The event might have been smaller than a usual powwow, but anyone present felt the positive spirit; essential for healing, as Harrington explained.

A message that was also carried out by the dancers.

“An elder recently mentioned to me that his heart is like a dreamcatcher,” said Diabo, “where it stops the negative from entering and keeps the positive. I feel this is something we need a lot of these days because there’s a lot of messages that can bring us down.”