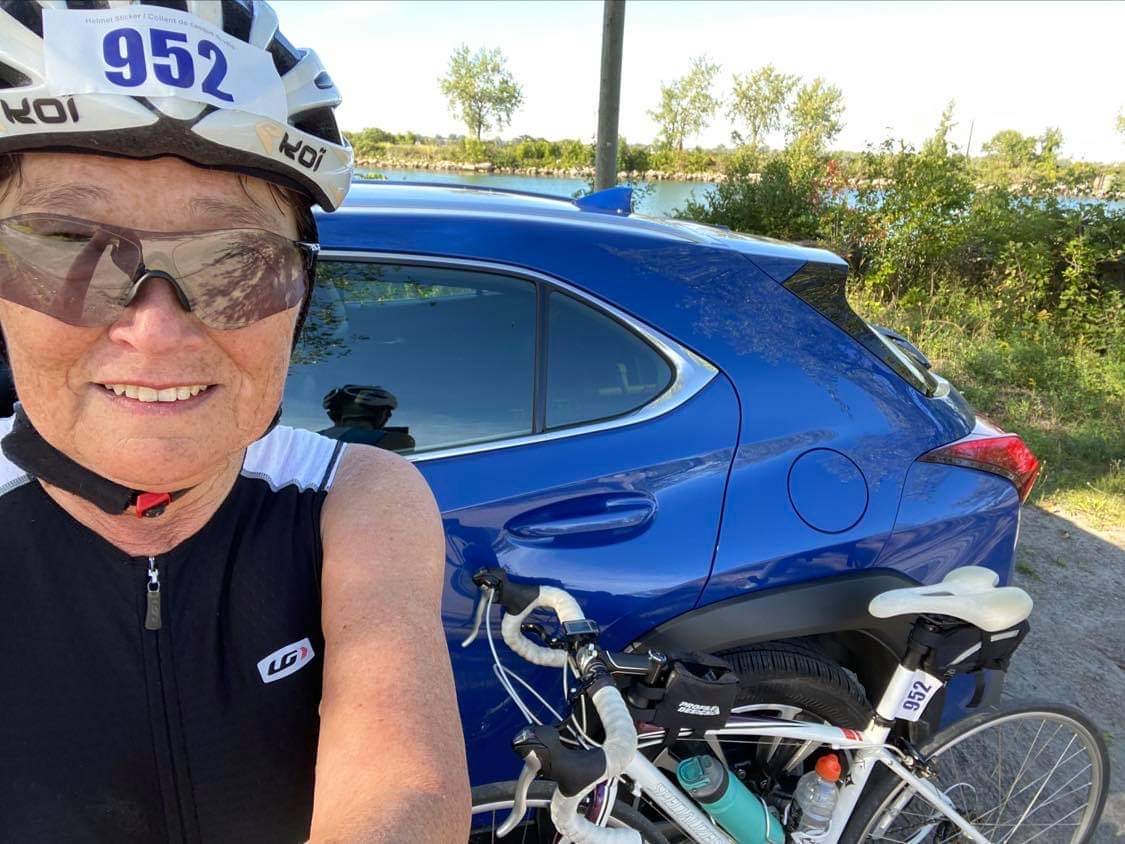 For the last three months, Elizabeth Taylor had been training for Triathlon Demi-Esprit, a race she has been doing on and off for the last 12 years.

The race was to be held on September 12 at the Olympic Basin, in Montreal.

But then at the last minute, organizers cancelled all of the long-distance races and kept only the short ones.

“I didn’t want to do that, because I have done that before, and it’s not what I trained for,” said Taylor.

So, she decided that the next best thing was to do it on her own.

“I contacted my sister, and she was wholeheartedly in to be my support while I swam in the Seaway (St. Lawrence) because I couldn’t swim by myself. You’re not supposed to. So, I was psyched!” she said.

Last Saturday, she and her sister Christine and her nice Ansley Goodleaf headed out to the Seaway to start the one-woman race.

“I started out a little afraid because I haven’t swum in the Seaway since I was a little kid,” she said.

She swam 500 metres going upstream and said it was tough, as she was going against the current.

“Then I turned around and came back to my starting point. I was like, ‘okay, that’s enough for me,’ this is my race, so I can make the rules. I swam one kilometre. I got out and thanked my sister and my niece, and they were my escorts on paddleboards,” said Taylor.

Afterwards, Taylor transitioned to the biking portion of the race.

“I had my bike in the car. I had to take off my wetsuit, which is like peeling off a second layer of skin. It’s tough – I’m not used to it – because I usually swim with masters – and we swim in a pool,” she said.

Taylor had to bike for 90 kilometres and said that she had measured a route the day before.

Her starting point was the bridge on Tekakwitha Island until the Marina.

She then rode along the river on the bike path all the way down to the town garage and back to the starting point.

“That was the first time I did 90 kilometres this season. I had done my training only up to 50 kilometres. That was a good feeling,” said Taylor.

It took Taylor five hours and 19 minutes to complete her race.

“I had so much fun. It just felt good to get out there and do something. This year there were so many races that were cancelled or rescheduled for next year – and I just said ‘I’m going to do it,’ because I won’t have another chance this season and because the weather was perfect,” she said.

Taylor, 62, started participating in different races and at the Master’s at CACM in Chateauguay when she was 50.

“Anybody who thinks that they want to try something, especially a triathlon, go for it. It’s a challenge. It’s a lot of fun. It’s the training that you put into. It makes it come full circle, and when you cross that finish line – I swear you have the biggest smile on your face. I do, at least.”