You are here
Home > News > A parade to save lives 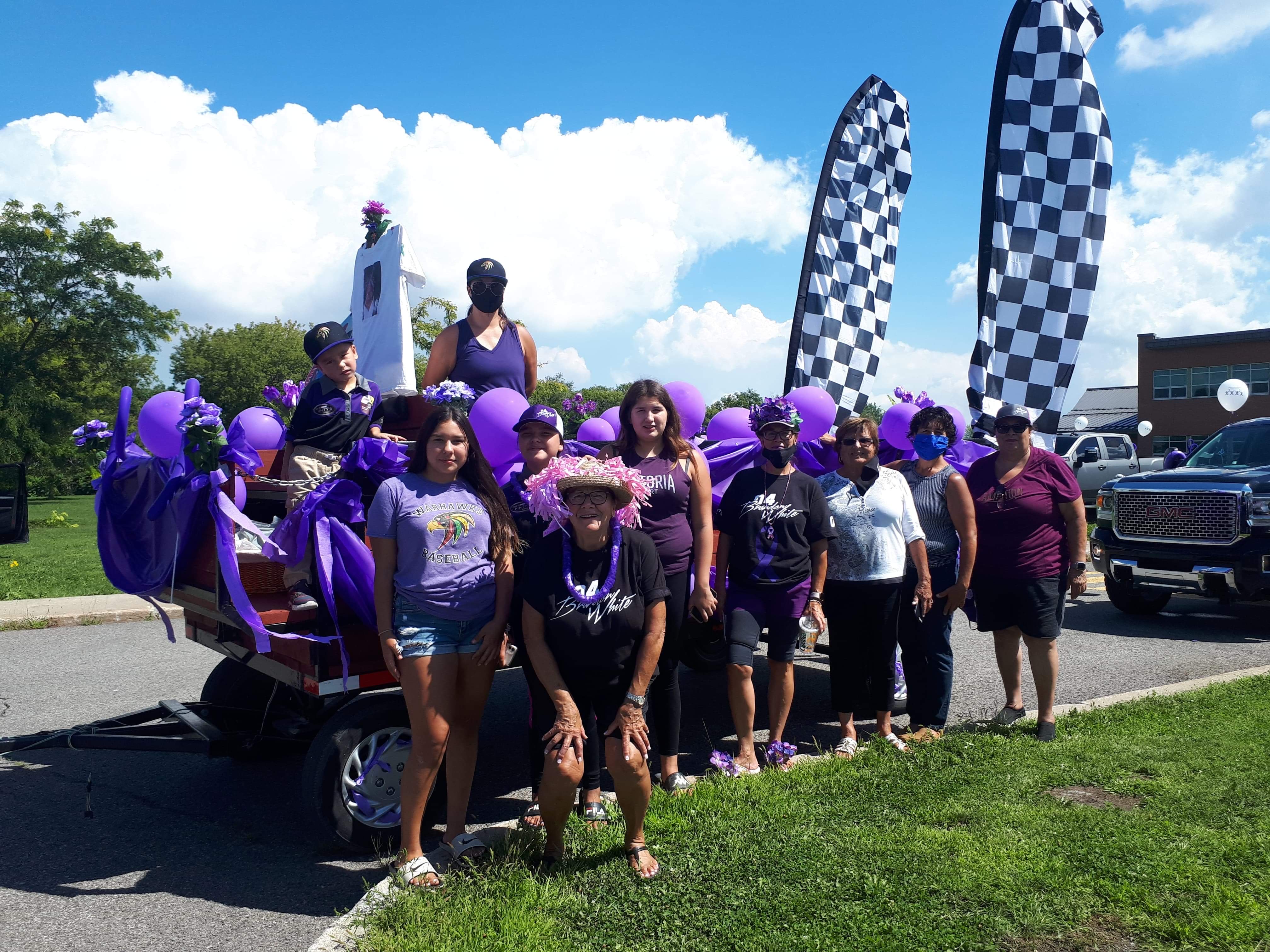 The Purple Ribbon Parade took place last Saturday (August 22), and organizer Gale Laborgne said that as of this week, Tetewatatia’takéhnhas had raised $39,000. Their goal for 2020 is $50,000.

In April, organizers announced that they cancelled this year’s Purple Ribbon Walk, which is their major fundraising event of the year, normally taking place on the third Saturday in the month of August.

The goal of the fundraiser is to raise money to help assuage some of the financial pressures that cancer patients go through while undergoing treatment.

The first Purple Ribbon Walk was held in 2016.

“The parade was such a success,” said Laborgne. “We also tried to get the community as actively involved as much as we could, through the different events that took place last week,” she said.

The parade started at 1 p.m. at Karonhianónhnha School, as 45 vehicles were all decorated in purple and other awareness colours. People were also decked out in purple clothing to show support.

The caravan of colour rolled down the Old Malone Highway past the Kateri Memorial Hospital Centre, where staff and elders also showed their support by wearing purple and colouring their own ribbons.

Some of the vehicles were blasting music to engage the community from their porches.

“We were giving away sanitizers and masks, buttons, t-shirts, agenda books to the crowds, and they were just so happy. It was something else,” she said.

Carol Boyer Jacobs, who is a cancer survivor, having battled the debilitating disease twice, said that for her, it represents the past, current and former cancer warriors.

“It is important for our community to be aware and feel included in any form they are capable of, wherever it be watching, participating or fundraising,” said Boyer Jacobs. “I thought the parade was both beautiful and emotional!” she said, adding some families had floats in memory of their loved ones.

Boyer Jacobs said that she has a personal connection to Tetewatatia’takéhnhas, who helped her out financially when she was going through treatment.

“I’ve participated in various fundraisers, including the Purple Ribbon Walks, where my family did a fundraiser on my behalf, going towards others who were in need,” said Jacobs.

Her husband Joe Jacobs also created an eagle staff for the event.

Some of the activities that took place during the week included a giant ribbon scavenger hunt.

“A lot of people with kids and cars were out there. We even had adults looking for the ribbons, ” said Laborgne.

Each winner got a $50 gift card certificate, and there were five winners.

There was also a step challenge, colouring contest and a purple day where dozens of community members posted pictures of themselves wearing purple. The prizes and names of the winners have been posted on the Tetewatatia’takéhnhas/Purple Ribbon Walk Facebook page.

Last Friday (August 21), Tetewatatia’takéhnhas was the recipient of K1037’s community fundraising bingo. The radio station donated $1,215 to the initiative.

Later that evening, Tetewatatia’takéhnhas announced the winners of their mini-lotto draw. Trudy McGregor and Kelly Stacey won $5,000. The women donated back $400 to the initiative.

Last year, the organization raised $38,000, and according to the Laborgne, that amount keeps going up every year.

“The number one thing is to help people battling cancer while they are going through treatment,” said Laborgne.