You are here
Home > News > Setting the record straight on threats 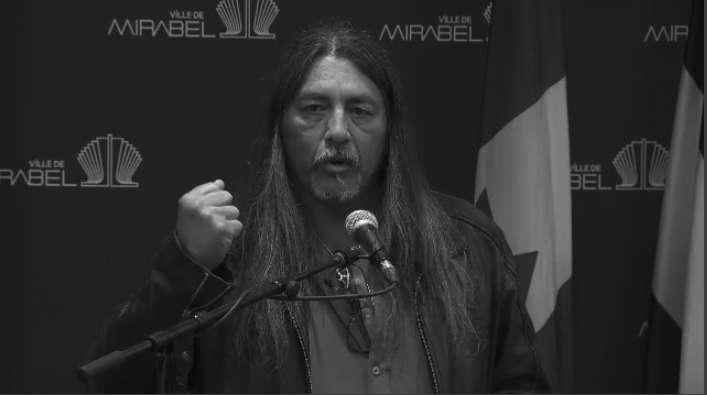 Mohawk Council of Kanesatake grand chief Serge Otsi Simon came out of his silence to set the record straight about the threat allegations reported last Friday in various media.

On August 21, news came out that the grand chief had filed a police complaint after receiving threats of having his house burnt down while also refraining from stating whether or not he was still living in the community for his own safety.

“I simply gave the information to the police as an FYI in case something happens,” said Simon, who confirmed with The Eastern Door that he didn’t file a threat complaint with the SQ. “I’m not looking to press charges on anybody. The media took it upside down and now the people are angry.”

When asked about the subject, seargent Éloïse Cossette from the Two Mountains Surete de Quebec said that they were not able to confirm whether or not there was an ongoing investigation.

The messages that prompted such allegations came from Facebook conversations in a private community group.

The Eastern Door was able to retrace the messages while confirming with the grand chief that he didn’t receive any private ones that could have led him to believe his life was in danger.

“Basically, the intention behind the post was that there should be a vote of non-confidence and that he should not be a chief,” said the person responsible for the message, who asked to remain anonymous. The writer emphasized that they didn’t support the grand chief’s politics, but that it didn’t mean that any harm should be done to remove him from office.

The message referred to former grand chief James Gabriel, stating that “they need to get the boot like Jimmy Gabriel did” while talking about chief Patricia Meilleur and Simon.

For Simon, it undeniably triggers the memories of Gabriel’s house being burnt down in 2004, shortly after he got a vote of non-confidence against him repealed by the federal court. The current grand chief, who recently denied a motion that would start the process of a vote of no-confidence brought against him, said that referring to Gabriel incites that same type of violent mentality into the community.

“I’m telling you, I’m no James Gabriel,” said the grand chief in a recent interview with The Eastern Door. “Instead, I got some people putting misinformation, it’s the same tactics they used on James and it’s based on a bunch of lies and half-truths. They are not gonna do to me what they did to him.”

Community member John Harding, who was also a chief during Gabriel’s mandate, thinks differently. The ex-police officer sees Simon’s declaration in the media as a dangerous way to encourage things to spin out of control.

“It’s not what the community wants,” said Harding. “The community wants to exercise their rights and by not allowing them and blocking it as a whole is possibly the vehicle that could bring in the kind of violence from the outside, like police state intervention.”

Gabriel amassed over 50 police officers to carry out raids in Kanesatake in 2004, but they were met with an angry group of protestors who wouldn’t let them out of the former Kanesatake Mohawk Police (KMP) station.

It eventually led to an agreement that saw the police leave and the KMP to disband.

Harding is among the people who see Simon’s distancing himself from the community as a way to avoid answering questions rather than protecting himself from potential threats. “If you can’t give clear answers when you’re asked questions…I feel like that’s why he’s hiding,” he said.

Despite the fact that Simon claimed that the situation and threats have been going on for years, Harding said he felt the mistrust towards the grand chief and MCK reach a boiling point recently.

It was highlighted earlier in June by a group of seven community members, which included Harding, that the community was lacking key information on ongoing issues such as the land claim negotiation, the state of the environmental health of the territory, and finances audits.

The group called a public meeting on July 22, which prompted 100 community members to come out during the pandemic, while respecting social distancing. The meeting addressed the issues, which were met with even more questions from the people who were present. It resulted in a vote towards a motion of non-confidence, demanding the resignation of the grand chief and chief Meilleur.

The evening, which took place in the Ratihén:te High School backyard, was later deemed illegal by MCK. The council condemned it and stated that the use of specific dialogue from community members demanding answers set a dangerous tone, inciting violence.

“We do not support nor condone threats of violence against members of our community, and will stand against them if necessary, regardless of our position,” said Tracy Cross, one of the seven members from the group.

Moreover, in the interview with The Eastern Door, Simon reiterated that even if the Quebec government allows gatherings of 250 people since August 3, COVID-19 imposes a democratic limitation.

“This group violated the rights of our community by not advising everybody,” said Simon. “I tried to explain to people that public meetings should be free of all limitations. COVID imposes a limitation. If one community member says that they cannot go, right there it completely delegitimizes the public meeting.”

While maintaining his refusal to hold a public meeting, Simon intends to divulge a new audit in the Fall as financial incoherencies were among the questions asked by the group.