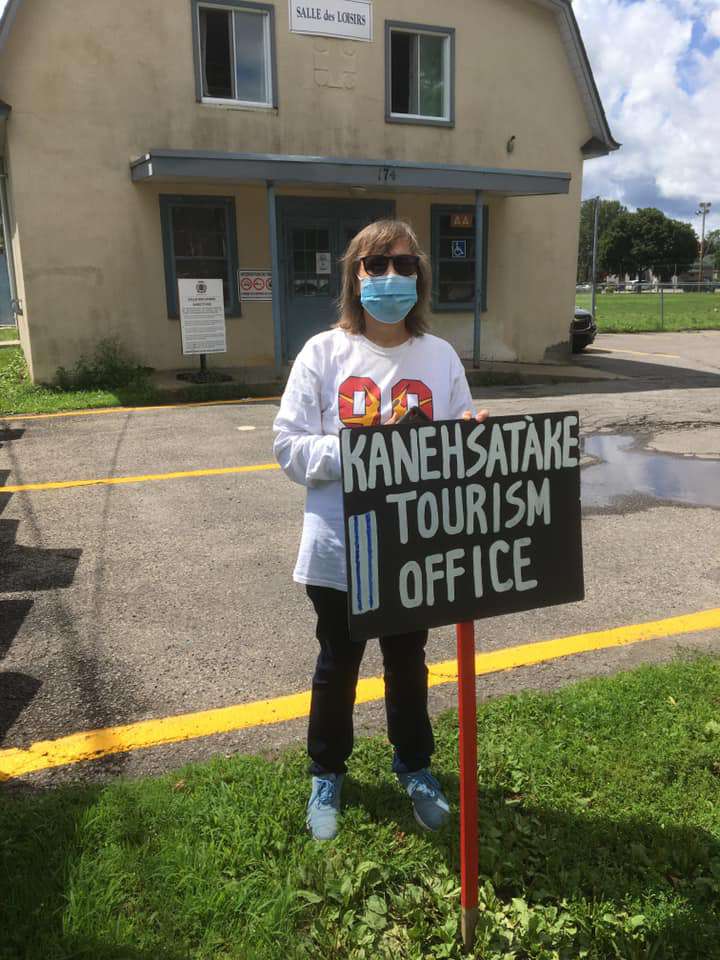 Since July 20, what has been termed a mobile tourism office has been taking over unceded places in Kanesatake to raise awareness of historical injustices.

Through Facebook posts and live videos, the office is being used as a learning tool to shine light on the past for all to see.

The initiative is part of Ellen Gabriel’s art project that seeks to demystify the truth about the community’s narrative. She felt compelled by the frustration and apathy that’s present in the community, but also her passion to stand up for the land.

“It’s an activity, for me as an artist, to highlight to anybody how much land we actually lost,’’ said Gabriel, “how much land is being developed right now, even though there’s a pandemic going on.”

The idea actually came to Gabriel a few years ago, when the People of the Longhouse were protesting the development site. Back in 2017, Gabriel, along with other community members, stood at the corner of Belleville and Verger streets in Oka. They were protesting the residential project overlooking the Pines, a development deal agreed to between the Mohawk Council of Kanesatake and the municipality of Oka.

Three years later, she has now covered multiple locations in the surrounding area with her mobile tourism office, such as the Oka Golf Club, the old uranium and niobium mine, and Oka Park.

“It’s a very complex issue, but I try to simplify it by turning it into a tourism office,” said Gabriel, who’s doing the project on her own free time. “This is an Indigenous form of tourism, it’s not meant to be recreational, but to show the actual history to this land and you should be aware of it and know about it in order to respect it.”

Indigenous tourism has actually been on the rise for the past years. An organization such as Indigenous Quebec Tourism, founded in 1991, promotes positive experiences through activities such as festivals, gastronomic field trips, or hunting and fishing at Indigenous outfitters or wildlife reserves.

Indeed, tourism has always been a prosperous form of economic development of any region. It leads to the creation of various attractions, hence more job opportunities. According to their statistics, each year, Indigenous Quebec creates nearly 4,100 jobs and shares its culture with more than a million visitors while generating economic benefits close to $169 million.

In an interview with The Eastern Door, the Kanehsatake economic strategy and development director Manon Jeannotte said that recent consultations with the community showed a desire for touristic and cultural development.

“We are in a touristic region and there’s nothing better than having tourism, but not at any price,” said Jeannotte. “Yes, we want to share our culture, but we got to do it the right way.”

Although Gabriel agreed that her satirical version of a travel office is in fact promoting a darker form of tourism.

“My tourism office is not a fun version,” she said, “it’s more the real version of an area. Whether it’s the park or housing development, it was land that was originally occupied by our people and still is.”

One of the sites Gabriel has been covering is the controversial Seminary of St. Sulpice. In the early 18th century, the evangelic mission moved to Lake of Two Mountains and began to sell lands – which were already belonging to the community – to white settlers.

“I’ve gone through every site that the Seminary of St. Sulpice has sold illegally, originally in collision with the government of Canada,” said Gabriel, “and these sites represent the disposition and the fact that Canada still assumes their sovereignty on our lands.”

The mobile tourism office is currently a virtual learning tool. Social distancing is restricting visitors from entering and remaining in the community, but Gabriel sees her out-of-the-box project eventually taking a higher form where people could come in for a tourism day.

“Artists are meant to be the consciousness of society and that’s what I’m trying to do,” she said. “That’s what I think is being lost with this present generation. They are not being taught this in school.”