You are here
Home > News > Talks continue for Route 207 project 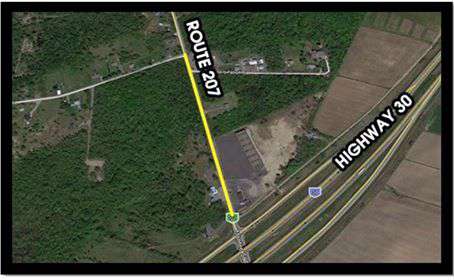 During a recent meeting in early August, chief and council of the Mohawk Council of Kahnawake (MCK) discussed the resumption of the Route 207/ Highway 30 Intersection Rehabilitation Project that began two years ago.

For many years Route 207, a major thoroughfare to the Mercier Bridge and Montreal, has been troublesome for community members because of heavy traffic and road and infrastructure issues, among several other problems.

“One of the things that people need to know is that we do have a cooperation agreement with Quebec,” said MCK chief Rhonda Kirby who is part of the Infrastructure, Transport and Operations portfolio. “And we had some work done previously in the community, and specifically part of the 207 was already redone.

“Originally, what we had started was at the 207-30 interchange, the reconstruction of that area,” she said.

In 2013, three culverts along Route 207 were replaced as part of what Kirby called the “culvert project.”

Then in 2015, the MCK Capital Unit announced that surveying work for the then-upcoming rehabilitation project would start in February of that year. The plan was the reconstruction of Route 207 in its entirety.

However, the project stalled, and because of a confidentiality agreement currently in place, Kirby could only say that council is looking to find a resolution to some of the issues so the project can continue.

“We also ended up having a major backlog of traffic on the 207, and residents who live in that area often have a hard time getting onto the 207 because the drivers on that road don’t let anybody in. So that is a major difficulty,” said Kirby.

Kirby said that many residents were forced to leave their homes extremely early in the morning because of the congestion.

She also said that a couple of years ago, a stop sign was installed to try to control the problem and help residents in the area, but that caused more traffic “than ever before.”

“We also know that there is a lot of apartment complexes that are being built on the South Shore, including Delson, Ste. Catherine, and St. Remi, so there is a lot of housing that is going on beyond us, but there is only one way into Montreal using the Mercier Bridge,” she said.

Finding funding for the project has also been challenging for council, specifically funding to install a water and sewage system since homes in that area of the territory still use a well system.

“Quebec is saying it should be federally-funded because we are on reserve. Actually, this whole project has been at the council table for many years now. It’s been difficult to really get a commitment,” said Kirby.

According to Kirby, MCK does not want to start the rehabilitation project to repair and widen the road if it doesn’t have the money to add the water and sewer system at the same time.

“In the end, our goal is to find the funding so that when we are able to continue with the actual reconstruction of 207, it will be able to have all those community members in the area connected to our central water system,” she said.