You are here
Home > News > Kahnawake batters come through 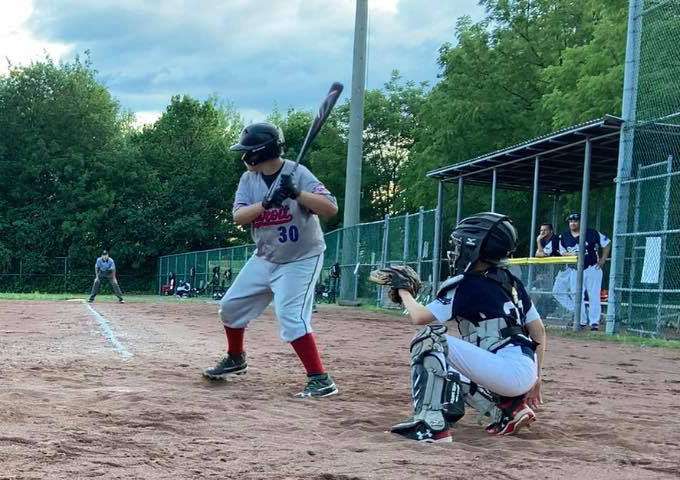 Tyson Kyer (left) at bat as the third man in the batting order. Kyer has hit six RBIs in the first three games of the season.

It has not been an easy start for the Peewee Suroit Voltigeurs Gris of the Region de Lac St-Louis but two Kahnawake boys have excelled after three games.

The team has two losses and one tie to start the season, but Tyson Kyer and Tahaniehtonhawi Mayo-Nolan of Kahnawake have combined for eight RBIs – Kyer with six and Mayo-Nolan with two – of the team’s 17 runs.

The pair has developed chemistry with each other, both offensively and defensively.

“We’ve been friends since kindergarten,” said Kyer. “We just starting playing together for the first time this year.”

Tyson’s father Matthew Kyer joined the team as an assistant coach since the second game. He has noticed the duo’s synergy.

“Taha is our leadoff. He’s our most consistent hitter. He’s never been thrown out because he’s so fast,” said Matthew. “Tyson is a straight-up athlete. He’s a slugger and good at what he does.”

In the second game of the season, the Suroit Voltigeurs Gris suffered a 10-4 loss to Suroit Voltigeurs Rouges at Parc Georges-Soyez in Lac St-Louis last Thursday. Tyson and Mayo-Nolan combined for three RBIs of the team’s four runs.

Tyson was the starting pitcher, but only pitched one inning since the team was testing their pitching rotation.

“We’re still trying everybody who wants a chance to pitch to see who is the best of the season,” said Matthew. “Probably five or six games in, we’re going to find out our rotation. We only get one practice a week and I can only judge them during the games.”

The team lost 12-8 to the Pierrefonds Dodgers at Parc Grier at Lac St-Louis on Monday.

Mayo-Nolan had three runs and an RBI for a productive game offensively. Tyson batted in two RBIs in the losing effort.

The boys were included in a double play with Tyson on first and Mayo-Nolan on second base. It began with a hit to the shortstop, throw to second, then first base at the bottom of the first inning.

Despite the team’s struggles, Matthew believes they have several obstacles they must overcome before they can win.

“They were pitching on a mound, but not all places have one,” he said. “We were at a disadvantage. We were trying to teach them as the game is going on. It was a hard adjustment.”

Several players on the team prioritize hockey over baseball, which makes it difficult, according to Kristina Glen, Tyson’s mother.

“We have a couple of kids who are capable of hitting better, but they’re hockey players first,”she said. “Half of our team plays baseball, but half plays hockey.”

“Two kids showed up in the second inning then two more in the fourth inning because of hockey,” said Matthew. “We’re still not gelled as a team because we don’t know who’s going to be at the game.”

Suroit’s next game was against the Presqu’ile Pirates on Thursday at 7:00 p.m. after presstime.