You are here
Home > News > Commemorating the standoff 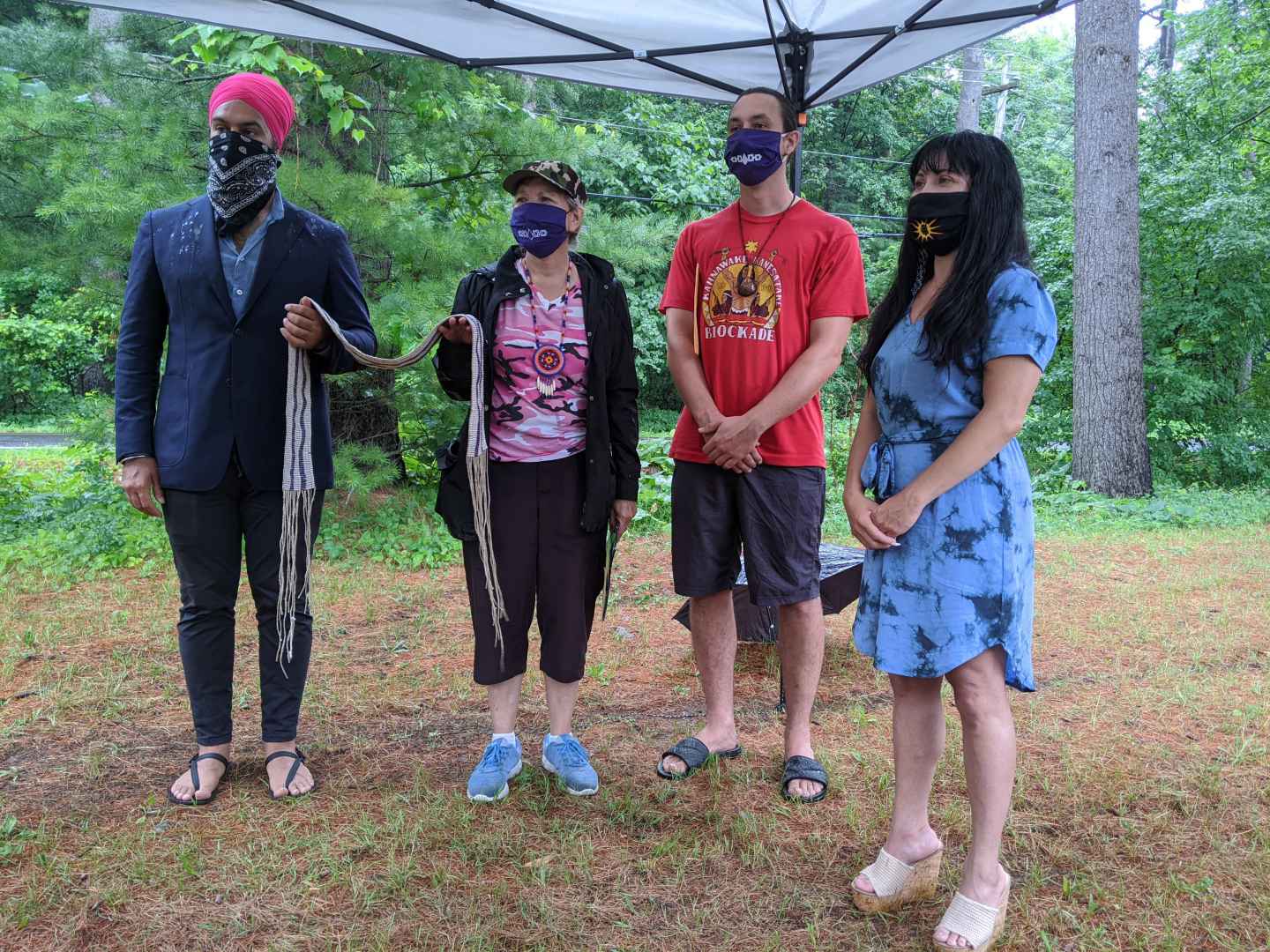 The rain fell over Kanehsatake last Saturday as the impressive rolling blockade organized by the People of the Longhouse drove into the village of Oka.

Longhouse spokesperson Ellen Gabriel explained the convoy, which in previous years was a walking demonstration, was a safe way to commemorate the Siege or Crisis of 1990 during the COVID-19 pandemic.

While people on their front porch were smiling and waving, the gloomy absence of the sun along with the community’s raised fists was a reminder that this was far from a celebration.

Thirty years after the 78-day standoff, the focus on Indigenous issues all over Canada might have improved, but the community feels like not much has changed.

As cars carrying Warrior and Haudenosaunee flags followed Route 344, one buggy particularly stood out. Tracy Cross was driving with the picture of his brother Ronald, nicknamed Lasagna, proudly glued to his dashboard.

Lasagna became a famous figure of the standoff, often associated with the widely-shared photo of the Mohawk Warrior facing off against soldier Patrick Cloutier.

For Cross, last Saturday was all about honouring his brother and his ancestors.

“It is a day of solidarity,” said the military veteran who, at the time, was fighting on the other side of the world, in Germany. “A day of unity, of celebrating my ancestors who stood for the lands. It’s remembrance day.”

And for him and many community members, the anniversary was a reminder that the situation is still deeply complex and unresolved. Accordingly, the convoy took a detour into the development site near the Pines. Gabriel explained she wanted to show people how many houses are being built there and how it’s still expanding.

The site isn’t a new one, it’s the same piece that was protested against by Kanesatake three years ago as they were trying to avoid more development. “We want our land back,” said Gabriel during the press conference in the Pines. “That’s part of reconciliation.”

The rolling blockade eventually stopped at the four corners, letting the voices of the Kontirennotatie Women Singers resonate under the pouring rain.

“The summer of 1990 serves as a reminder that the Kanien’kehá:ka are willing to defend their land and protect their people, by any means necessary,” said Gabriel, reading a public statement at the same moment. “The same holds true, 30 years later.”

One of the singers, Karonhienhawe Nicholas, was 17-years-old during that summer. She now has very little faith that anything will change for her community.

“It is an emotional day, just like every anniversary,” Nicholas told The Eastern Door. “Something we will never forget. The sounds of the gunfire will forever echo through my very core.”

The people were joined by New Democratic Party leader Jagmeet Singh and Manitoba NDP MP Leah Gazan. Both were there as allies, invited by the People of the Longhouse. Gazan was there three years ago before she was an MP, when Gabriel put out a call for help to stop the latest development site.

“I’m here to listen, learn, but to fight for real justice,” said Singh, “and it’s not just empty words and empty gestures. It’s a question of ensuring that the land titles are respected, that the people whose lands have been denied for so long are returned, not claimed, but restored.”

Singh was only 11-years-old when 1990 happened, but said he sees the resilience and the strength of Kanesatake, standing up and fighting back against oppression, as an inspiration.

He reaffirmed his support to the community by declaring the land dispute is an important issue and that there is no excuse why this cannot be resolved.

“What we’ve seen over the years is a lack of will to get it resolved,” said the NDP leader. “Canada created the problem, so Canada has the responsibility, not to just put their hands up and say ‘we don’t know what to do,’” he said at the press conference.

Gazan also stressed it is time for this matter to be resolved.

“There will never be reconciliation in Canada in the absence of justice,” said the Lakota Nation member. “The people of Kanesatake have waited over 300 years for this justice and it continues to be infringed upon.”