You are here
Home > News > Two communities united in 1990 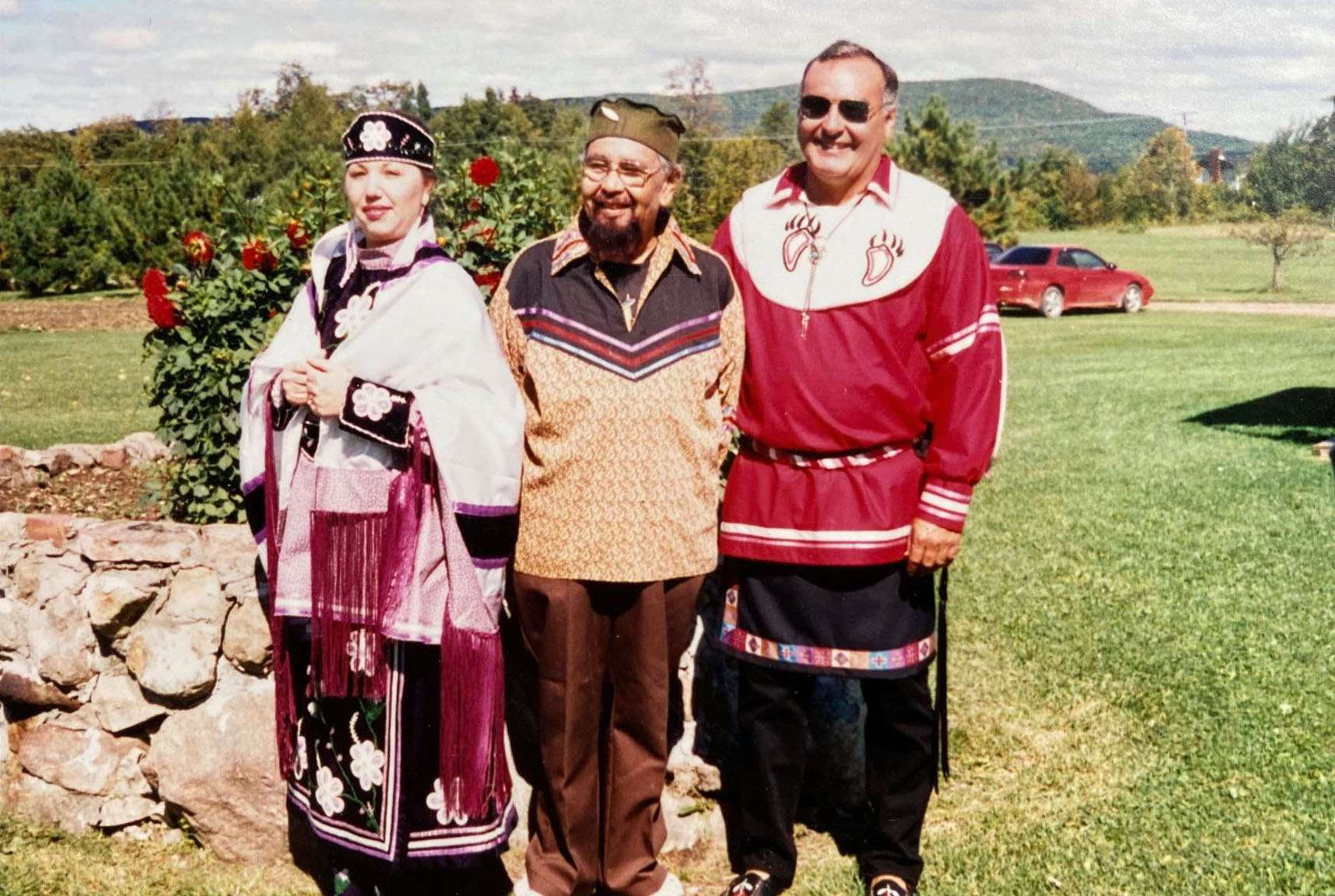 Engagement in the TC, September 23, 1990 (bottom left), and the official, “second” wedding at 101 Ahsennénhson same date, five years later in 1995, with the late Frank Natawe as the officiant. 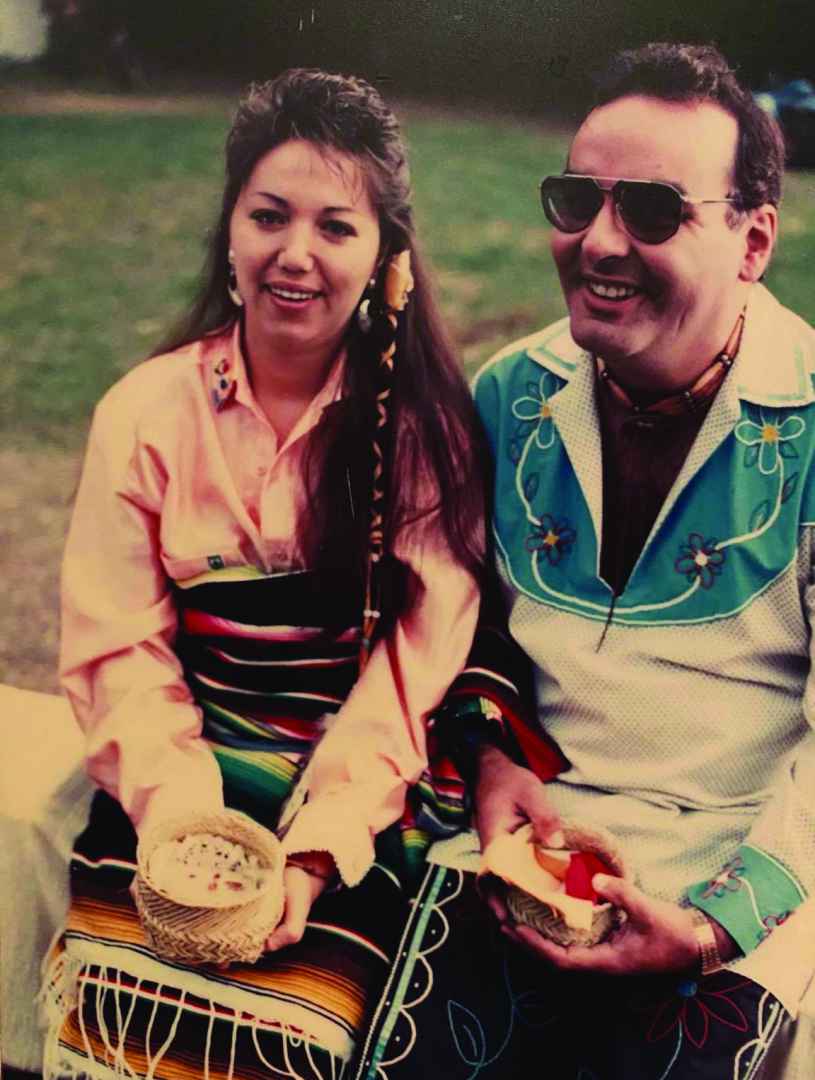 They say love conquers all, that it makes everything else seem less important. This was especially true behind the lines 30 years ago, during the 1990 Oka Crisis, when Kathy Skye and Dennis Nicholas formed a Kahnawake-Kanesatake union under stressful times and were married.

Officially it was an engagement party because they didn’t have an officiant, but they considered it a lifelong vow just as strong as their actual wedding, which happened five years later to the day.

Against all odds and facing daily intimidation by the Canadian Army as well as not knowing if one day would be their last on this Earth, the couple got married on September 23, 1990.

This was three days before the land protectors erupted from the Onen’tó:kon Treatment Centre, ending the 78-day standoff on September 26, 1990. “We had the right elements,” said Skye. “It was so intense that something had to give, and we knew we were going to be together after, so we said ‘let’s just have a little something here, make it memorable.’ People wanted us to do that too, to change the scene. We could never re-enact that, it was actually unbelievable.”

Skye was 30-years-old at the time, a recent registered nursing CEGEP grad from Vanier College, who was destined for McGill University to get her bachelor’s degree.

Clothing that was donated to the people behind the lines during that time had beads added to them for the ocassion. Someone made Skye a pair of moccasins thanks to supplies in the basement of the TC, and the wedding, despite being in such a confined space, could not have gone better.

The only thing that remains is the shirt Skye was wearing that day. Everything else was seized by the QPP (Quebec Provinical Police, the name the SQ was known as at the time), who never returned any of it.

Although they asked and searched, nothing was returned to them. Even the board on the pine tree at the top of the hill where all of the remaining Warriors carved their names is gone – and no one knows where it is, 30 years later.

The second and official wedding five years later allowed all of their loved ones to be present, because aside from the 60-plus people at TC, a lot of people were missing that first time. Since then, Nicholas’ two children from a previous relationship were joined by two more children, Wahsontanoron, 28, and Taionthahine, 26.

Skye recalled that all the elements were there at the centre, to recreate a familial atmosphere, a micro-community to support each other. She calls them her TC family, and she will never forget those days spent there.

Some of the men who were up all night patrolling slept during the ceremony, but it led into a beautiful supper where everyone was present.

“Every night we had a fire and women came out with drums, communal meals, whatever we could find,” said Skye. “A lot of people would come in, bringing and making food. Thank God it was at the TC because there were storage and things we could use. One time, (near the end as supplies dwindled) we had potato soup for two days!”

Whatever it took, they did it to stay sane throughout all the intimidation, the constant helicopter noise and occasional power outages. It was so bad, Skye couldn’t sleep properly for a long time after that, without hearing the noise of a chopper overhead.

“For us, the worst tactics were peeing in the apple juice. They (the army) would take off the cover and pee in it and put the cover back on, break all the eggs, and smoke the cigarettes that were being donated,” said Skye.

“There were no rights at all. You just hoped you would be alive the next day.”

A few days before the celebration, the couple sent their wills to the Mohawk Nation Office (207 Longhouse). They didn’t know what to expect but they were preparing for the worst. “We were gonna roll with the punches because we were ready,” said Skye.

The worst didn’t happen to them, but three days after the wedding, back then 38-year-old Nicholas went missing for four days. Anxiously, Skye called up multiple detention centres, but no one was admitting where he was being held.

“They took us to Parthenais (Detention Centre) and stuffed me into what would have probably survived a nuclear attack, it wasn’t just a cell, it was so fortified,” said Nicholas. “I know for my case, they had to nail somebody. The guys that ended up inside was to show the public that we were gonna pay for it. They went along those lines of criminalizing everything that we do. That’s the only book that they have. They don’t have one to honour you for standing up. They criminalize you, that’s what they do. That’s the road they took.”

Nicholas ended up spending over a year in jail out of a twoyear less a day sentence for participating in the conflict and being armed, or what Skye referred to, from the judge’s words: “inciting the whole thing.”

While the events following the wedding were undeniably jarring, Skye’s most intense moment during the 78-day siege was when her cousin was brutally attacked. Randy Horne was ambushed while he was on night patrol, in his fox hole, not that far from the enemy’s lines.

“I got tired so I got into my sleeping bag,” said Horne. “I was about to fall asleep and next thing you know, three or four guys came in and jump on top of me. And I couldn’t get my hands out of the sleeping bag and they started to pound me. I got banged up my head, it swelled up the size of a basketball. After that, I blacked out, one of the Warriors (Leroy Gabriel) came and they took off. They were trying to get me past the fence to accuse me of killing corporal (Marcel) Lemay,” he said.

Skye remembers at four in the morning, all she could see was red blood down the hall and a figure she couldn’t recognize as her cousin, due to his severe wounds. He had been terribly beaten, and to her recollection, his head was stabbed or pierced multiple times.

“I did not want him to die as I cradled him in my arms,” said Skye.

With barely any supplies behind the lines, they had to trade in ex-Marine Bill Sears with the army medic to ensure they would get their medic back once Horne was patched up and on his way to the hospital.

“There was a lot of intense moments, but you know what,” said Nicholas, “they never succeeded in putting the so-called fear of God into us. It was the opposite. It just created a firmer ground on why it’s our responsibility, the ones that are living, to protect the ones that are in that graveyard and honour them.”

When it was all over and the Warriors were exiting the Treatment Centre, Skye made her way into the village of Oka, and was taken in by a community member from Kanesatake who hid her in her basement long enough to change her clothes and a car came to take her away.

“I was in Kahnawake by boat in an hour,” she said. “When I couldn’t find Dennis, I went to the court in Longueuil and I said ‘arrest me.’ They said ‘you were never in there, there’s nothing to arrest you for’. They wouldn’t admit it, wouldn’t put cuffs on me, nothing.”

Finally, with pressure mounting, Nicholas was found in Parthenais, but his captors tried to keep him hidden as long as possible.

While he was being held, without a phone call, lawyer or formal charges, he said they had beaten Ronald “Lasagna” Cross so bad he was almost unrecognizable.

The strange part of it all, Nicholas remembered, were the photos some of the guards wanted to take with him, because of how famous the Warriors were from the 78 days inside TC.

“I would do it all over again,” both Skye and Nicholas said, while agreeing that the situation, and the land claims and lack of respect for Indigenous rights, haven’t really changed.

“What needs to go on and what I will continue to share as much as possible,” said Nicholas, “is that this is our land and this will never change. Don’t be ashamed of it, don’t be ashamed of yourself, of your language, of who you are.

“Be proud, be happy. That’s where we will stand, always. But for one really simple reason; this is our home. And if you don’t honour it, you gonna lose it and that’s what they want. They want us to be at the level of the ones living in the city that have nothing. They have little lofts and that’s what they call home. That’s not home. We still have our home and we need to never forget that,” he said.