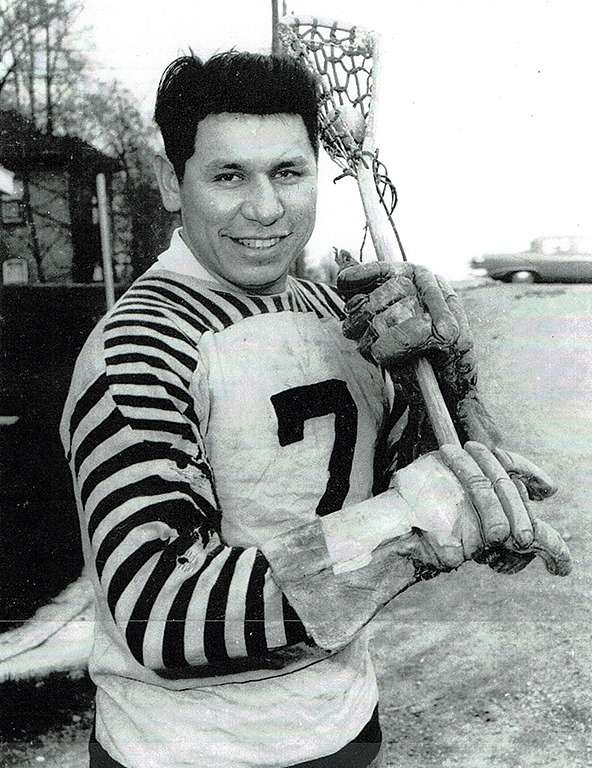 Ross Powless as a player-coach for the Hamilton Lincoln Burners Senior A team from 1956-1958. He earned several awards including league scoring champion, best defensive player, league MVP and coach of the year. (Courtesy Richard Powless)

One of the most distinguished figures of Mohawk lacrosse will be inducted in Canada’s Sports Hall of Fame.

Ross Powless – who passed away in 2013 at age 76 – of Ohsweken, Six Nations, has become the eighth lacrosse inductee to receive the Order of Sport. He joins his son Gaylord Powless who was inducted in 2017. They are the only father-son duo to be inducted into Canada’s Hall of Fame.

Ross and Gaylord share the same honour in the Canadian Lacrosse Hall of Fame in 1969 and 1990, respectively.

Ross was inducted as one of five builders, including six other athletes, last week.

He won four straight Mann Cups with the Peterborough Timbermen from 1951-1954, including a Mike Kelly Memorial Trophy in 1953 for the finals’ most valuable player. He twice received the Tom Longboat Award for Canada’s outstanding Indigenous athlete.

“We’re just all so incredibly pleased and proud,” said Richard Powless, another son of Ross.

“He’d actually be proud of joining Gaylord in this category.”

Ross was known for helping the revival of box lacrosse in the 1950s. He built up lacrosse communities in Ontario, Buffalo and Six Nations. He coached multiple teams to national titles at every level.

He wanted to share his love for lacrosse since he took it up at the age of 12. It was a way to reclaim his heritage since he was taken away from his family and culture to a residential school for five years when he was seven.

“It (lacrosse) was always around him. His grandfather, his father and his uncles played,” said Richard. “He always challenged and encouraged us to be fit.”

His love of the game extended into his family with 14 children and its younger generations.

“We built a big backboard in our backyard, which was 30 feet wide and put up a screen mesh,” said Richard. “We practiced a lot as brothers. It was a lot of fun. His granddaughters are playing lacrosse as well and most of the grandkids played and had a stick.”

Ross once had coached six of his sons, including Richard, to a championship in the North American Indian Lacrosse Tournament at Nanaimo, BC in 1974. The father described that experience as one of the biggest thrills in his life.

“There was one shift where six of the boys were out at the same time,” said Richard. “It was like playing in the backyard and we all knew each other’s moves. It was fun, it was challenging and it was a tough tournament. We were exhausted but elated that we got the championship.”

Ross was described as having excellent sportsmanship, leadership and athleticism in his playing and coaching legacies. This reputation was despite the racist taunts and gestures from his opponents during his career.

“He had a quick temper and my grandfather chastised him. He told him he wasn’t here to hurt anyone or else he’ll hurt the team,” said Ross. “He took a lot of racist insults but he managed to keep his temper, stayed out of the penalty box and beat them on the floor.”