You are here
Home > News > Checkpoints set up at Oka Park 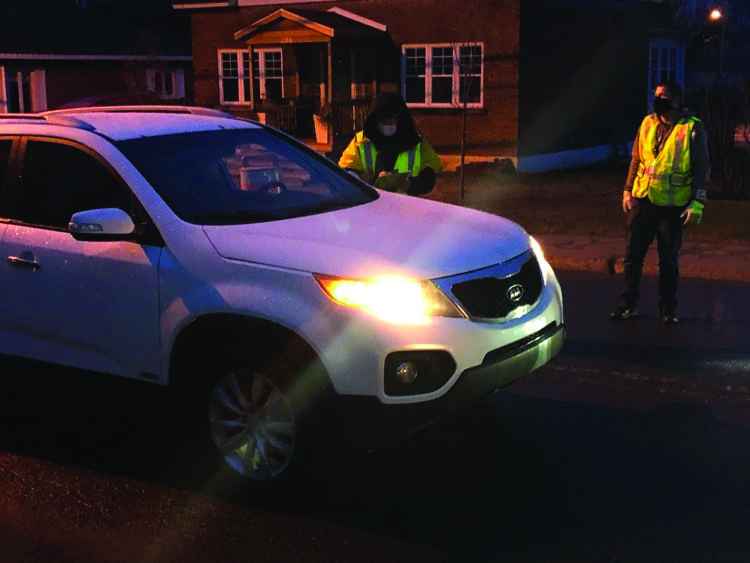 With Oka Park set to be open to the public soon, checkpoints were set up at the entrance on Wednesday May 20 to stop people from coming in.

Simon said opening the park without proper consultation was “irresponsible” and breached the government’s constitutional duty to consult with First Nations.

“Had the minister just picked up the phone and gave me a call like she’s done many times, I would have stopped what I was doing and we could have began a conversation about our concerns,” Simon said.

“They did not adequately consult us, I spoke with minister Sylvie D’Amours (Tuesday, May 19) and she said she sent a communication to all the chiefs of Quebec that this was the plan, but they were not very clear on informing us.”

The ERU’s concern is the health and safety of the people, and they believe the decision to reopen the park does not align with that.

“A lot of trails from Oka Park lead to the village and to the community,” Ian Prefontaine External/Internal Communication liaison for the ERU said. “The fear is that people are infected, and the people that we turned away today were from Montreal, Laval and really infected areas.”

The ERU is responsible for handling the pandemic with all resources available to Kanesatake.

They stated that on Monday, they sat down with the park that was in contact with the Societe des etablissements de plein air du Quebec (SEPAQ) and they said they would get back to the ERU the next day.

The ERU received no news the following day and on Wednesday at 7 a.m. they got news that the park was opening at 8 a.m.

“The discussion was that they would block certain bike paths, and put certain measures in place,” Prefontaine said. “When we got there, none of that was there and it was supposed to be business as usual.”

Simon also said that he was told that only one road would be open but when he got there that morning, both were open.

“And they told us social distancing would be enforced and when I went to Oka Park none of that was happening,” Simon said.

Marc Tessier, spokesperson for the Surete du Quebec confirmed with The Eastern Door that the SQ were patrolling in the area, but were not called to the location.

“We are aware of the situation, we’re monitoring the situation but we weren’t asked to intervene,” Tessier said. “We are in talks with all parties involved.”

Both the ERU and Simon are frustrated because they believe the situation with the checkpoints started off non-political, and has now turned political because of Pascal Quevillon.

“The mayor wasn’t too happy with what we did,” Prefontaine said “But the ERU is a non-political body, but the politics kind of got vacuumed into it. It was never about that, it’s always about the health and safety of our elders.”

Simon believes the mayor wanted the situation to turn political.

“We have tried to get our concerns heard, but unfortunately they chose not to,” Simon said. “It’s a situation we were honestly hoping to not have to be put into but we were forced into it.”

Quevillon was contacted for a comment but did not respond by press time.

“All the mayor is trying to do right now is show division which he did a pretty good job at today,” Simon said.

Concerns of the community

Simon said they were told the park would run at 50 per cent capacity, which meant having 4,000 people.

“What do you think the chances are that they are infected people in that group of people?” Simon said. “My responsibility is to protect all community members, including our people in the village. The mayor can talk all he wants about our checkpoints but they were there to protect people.”

The original five access control locations were put up on April 20 by ERU to help combat the spread COVID-19 in the communities of Oka and Kanesatake.

Simon said there are currently no facilities or toilets open at the park.

“The virus dictates how we operate,” Simon said. “We’re finally starting to see the numbers go down in Quebec, it would have been the best decision if we had waited two weeks.”

The municipality of Oka and the MRC Deux-Montagnes sent the Mohawk Council of Kanesatake (MCK) and the ERU a cease and desist letter, stating they were illegal and must be removed.

Since then, Mohawk Council of Kanesatake responded to mayor Quevillon’s request to remove the checkpoints with a lawyer’s letter stating they have the right to keep up the access control locations, citing they have they have the moral and legal obligation to protect the health of community members.

After the incident at the park, Simon called an emergency meeting with the grand chiefs that were available and the ERU held a meeting as well to discuss the situation.

In the grand chiefs’ meeting, Simon confirmed that they decided to send a letter to Quebec Premier Francois Legault’s government and state their disappointment with failing to consult with them prior.

“They failed in their duty to consult us on such an important matter,” Simon said.

Simon isn’t sure what’s going to happen in the coming days, but the ERU will be in charge of deciding what happens.

Moving forward, Simon said he would support whatever decision they make.

“I don’t know what’s going to happen,” Prefontaine said. “All I know is that we have consulted our community with a survey, Oka population and Kanesatake, and 90 per cent and more are in favour of the checkpoints and limiting tourists from coming here, so we know the position of our communities.”

“This is what they want as well so we know we are right to push this decision forward.”