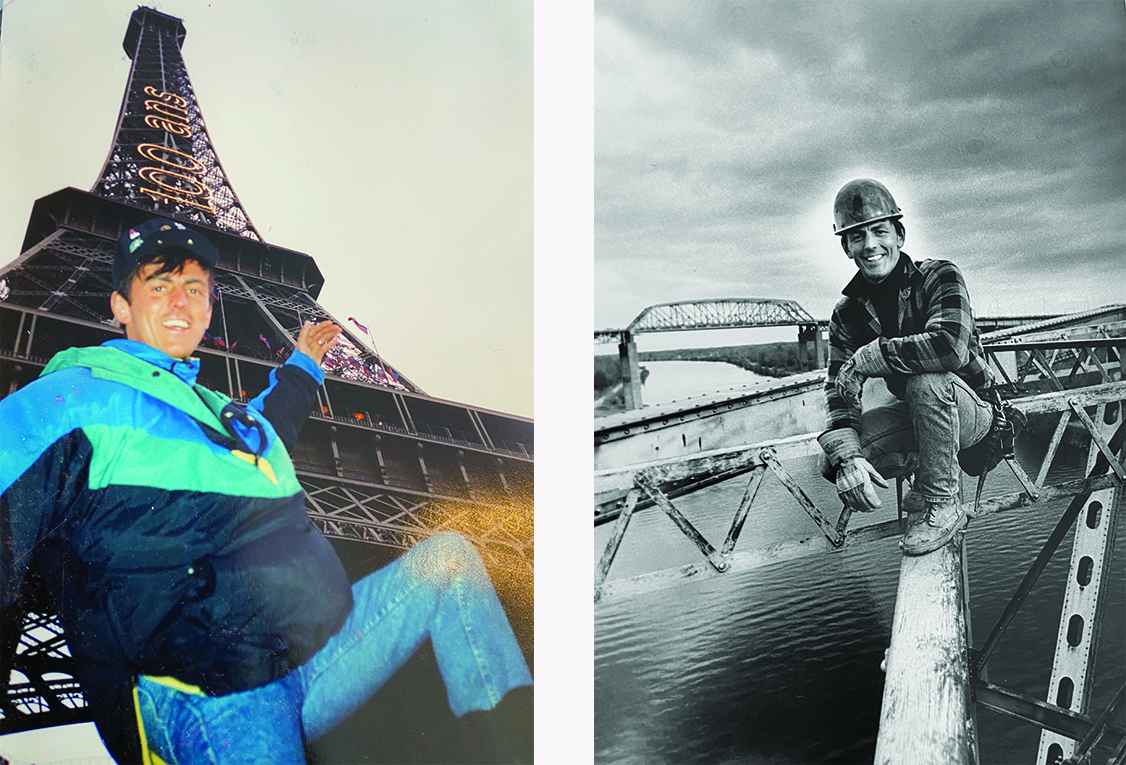 The adrenaline junkie that he is, Albert Stalk said that although he did not invent parkour, he was doing it before it became “the new thing.” (Courtesy Albert Stalk)

In fact, Stalk, or Eiffel Al as he is known, was the first person ever to climb the Eiffel Tower without any safety gear on February 16, 1990.

Stalk was 30 years old and newly married when he completed the daring climb.

So how was the view?

“It was beautiful, just beautiful,” said Stalk. “I never made any money on this. I did it for the challenge. I said I am doing this for all the Native people across North America.

“This is for achievement. I am doing this so I can show you what we can do or what we do in our lives as Native people. We make a difference. This is my way of giving back to the Native people in North America.”

Stalk, who comes from a family of ironworkers – his father, uncles and grandfather were all ironworkers, said that it all started when he was working the steel in Manhattan in 1988. 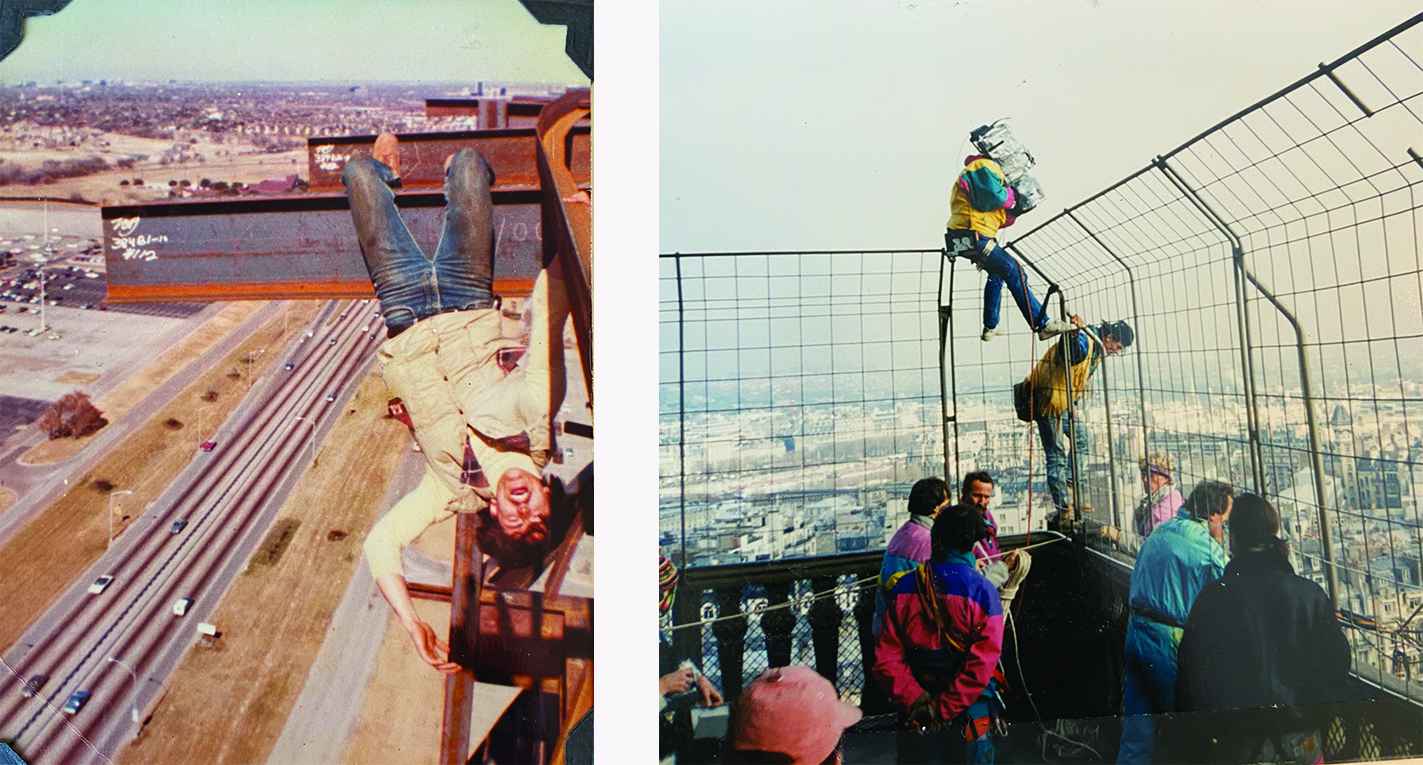 “One day, a film crew showed up where I was working. They were from France. And they were doing a documentary about Native Americans doing high steelwork,” said he said.

The crew was in New York to film an episode of a popular French docuseries broadcasted in the 80s and 90s called Ushuaïa, Le Magazine de l’Extreme. The series was hosted and narrated by former journalist and activist Nicholas Hulot.

“They came on to my job to film me climbing around,” said Stalk.

The episode ended up winning an award the following year in France, and so the production company invited Stalk and his wife, Ann Diabo Stalk, to attend a gala where he was presented with an award.

“I arrived on stage on a dogsled. They gave me this award because of my fearless acts on the steel,” he said.

“I was just so psyched. I was ready to go, just like an engine revving,” he said.

However, he was well aware of how dangerous the climb would be, and at times it was scary, he said.

It took 10-and-a-half hours for Stalk to complete the dangerous climb.

“Only because they had to stop every 120 feet to get the camera crew up. One time I waited an hour and I fell asleep on the steel,” he said.

To put things in perspective, the Eiffel tower is approximately 300 metres high.

Stalk said that he ate twice during the climb, a croissant for breakfast and later a light lunch.

Diabo Stalk was very worried during the epic climb because she knew how much of a daredevil her husband was.

“She was at the top of the Eiffel Tower waiting for me,” said Stalk.

He used a harness only twice – at the observation decks becuase he had to “climb straight up and then upside down and then cut my legs loose and hang like your cat on the fence and then pull myself up,” he laughed.

The accomplishment brought a lot of attention. “It was nice. The fame was unbelievable,” he said.

Stalk ended up doing five other documentaries with Ushuaïa after the Eiffel Tower climb.

When Stalk got back to Montreal, footwear and apparel company Reebok contacted him and asked him if he would be interested in doing an advertising campaign for them in London. They had gotten wind of his spectacular climb.

But unfortunately, things did not go as planned. 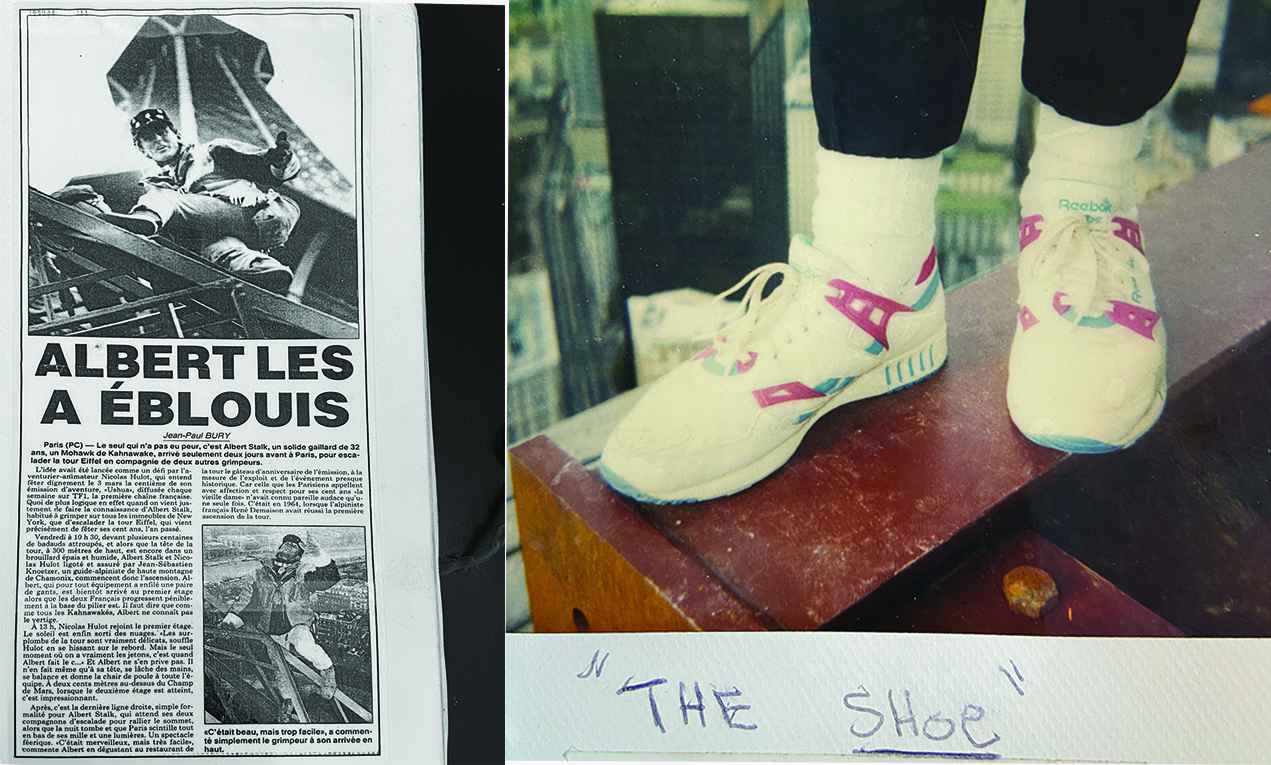 “When I did the commercial, a five-year-old boy jumped out of a three-story building in Manhattan wearing Superman pyjamas,” he said.

The Reebok commercial was only shown in two German cities before being banned.

In the commercial, Stalk is seen running on top of an 850-story building, and in the end, he jumps from one building to the other.

For this stunt, Stalk did wear a cable and harness, and he was swung off the building.

“The Reebok commercial was banned from TV, and I lost a million and a half dollars. They paid me for my stunt work, but I stood to make millions of dollars on the residuals.”

This means that Stalk would have gotten paid every time the commercial aired on TV.

“I am just still the same person. I never put myself on a cloud. I never said I was better than anybody else. I just feel that my life experience was fortunate….that I was able to do this.”