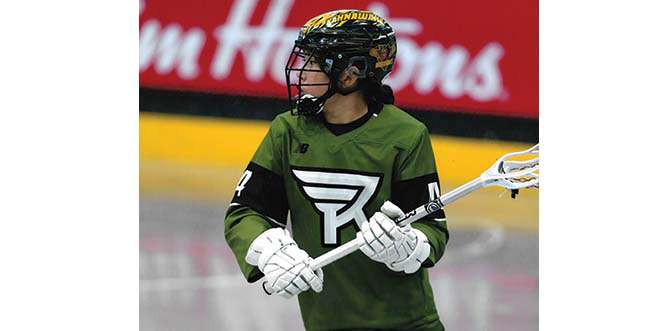 Darris Jones has strong family support in his pursuit of the game his father played for so long and they both love so much. (Courtesy Al Jones)

Darris Jones was in the lobby of the hotel that his Rochester Knighthawks were sharing with another team. Both teams were in Oakville, Ontario for the annual Peewee Jr. NLL lacrosse tournament. Jones, 11, started chatting with another boy from the Calgary Roughnecks team, and asked if he could trade anything for his cowboy hat.

“Sorry, we have to wear our cowboy hats when we win the tournament,” replied the boy.

Now that’s what we call bulletin board material, folks.

As luck would have it, Jones and Kanesatake youth Logan Ra’nikonronni Gabriel and the rest of the Knighthawks squad faced off against the Roughnecks in the semi-final.

The Knighthawks took a quick 5-2 lead, including a goal from Gabriel. When the fifth Knighthawks’ goal went in, Calgary’s coaching staff made the decision to change goalies.

“Any change in a game allows the momentum to slow down and that’s what happened. Now it was their turn,” said Darris’ dad, Al Jones, a retired lacrosse player who battled in 17 Presidents’ Cup tournaments.

The Roughnecks reeled off five straight goals, the last one coming with less than two minutes in the game.

But the Knighthawks refused to die, with goals from Nash Oudemool and Avery Valenti, who tied the game with just 37 seconds left.

“After Valenti’s goal, Calgary won the faceoff and got the ball, but the Knighthawks were constantly fighting for every ball. Most of the Roughneck players were in our end with only a few hanging back, so we got the ball, threw it down and with five seconds left. Chase Kogan scored the game winner and everyone went nuts. It was crazy,” said Jones.

“The boys were so happy for each other. They were such a tight knit group, it was amazing how fast they came together,” added the elder Jones.

“The boys showed a lot of resilience. It was a special win for those kids,” said Knighthawks’ coach Brad Gillies. He’s originally from Oakville but lives in Rochester, heavily involved in youth lacrosse programs.

Logan Gabriel’s mom, Andrea Kanerahtakwas Nelson, said it was the most exciting game many of the parents had ever seen.

The Knighthawks rolled through their four contests before the semis, beating the Bandits 9-4, the Thunderbirds 10-5, the Seals 9-5 and the Swarm 15-4.

Now it was on to play the New England Black Wolves to crown the tournament champion.

Early in the first half, Jones managed to cut his team’s deficit to 4-2, but the Black Wolves were too strong. They fired four more goals past Knighthawks goalie Blaine Powless before the first half was over. In the second, they’d add another eight to make it 16-2. James Holbrough scored for the Knighthawks with the New England victory sealed.

“We were off to an okay start when they were up 2-1, so I thought it’s okay, we can catch up. And then they scored again and again. But at least we made it that far,” said Darris Jones. “I think I played as good as I hoped. I could have played better but three goals in the tournament was good,” he added.

“It was tough. They had really good players. I was kind of mad and sad at the end of it,” said Logan Gabriel.

“The New England team was really strong. They had pretty much dominated throughout the whole tournament, so we knew we were in tough,” said coach Gillies. “We used a lot of energy in that semi-final game and we ran out of steam in the final.”

Gillies had just four weeks to develop team chemistry among a group of kids from Rochester, Syracuse and Kahnawake. The kids tried out for the team in July and had four weeks of practice over August prior to the big tournament

“Our preparation was really key,” said Gillies. “I give a lot of credit to the kids and their passion for each other and for the game to be able to come together, want to win and be competitive.”

For Al Jones, it was a special group. Watching his son’s team was well-worth the five-hour drive to Rochester to practice. They would also stop over in Onondaga to visit family, just one hour from Rochester. They knew they wanted Darris to play for in a Jr. NLL tournament in the summer, and this was an opportunity worth going after.

“I always said I’ll never make him miss a game for me – I played my years. But I’ll drive anywhere for him. I’m blessed that he loves the same sport I love, so I’ll take him to the end of the Earth to play a game,” said Jones.

Nelson echoed those sentiments. Her daughter plays ‘AA’ travel hockey, which means frequent miles on the road between the kids.

“I’ll do anything for the kids to keep up with sports. The opportunities and friendships he makes, it’s awesome. It’s just to show them there’s more out there than the rez. It gets them to see new places and make new friends.”

Note: A few other Kahnawake kids also competed in Oakville. Casey Lahache, along with twins Tehahente and Tehorahkwaneken Albany, played in the Bantam level tournament for the Georgia Swarm as well as Lou Alfred at the Midget level.