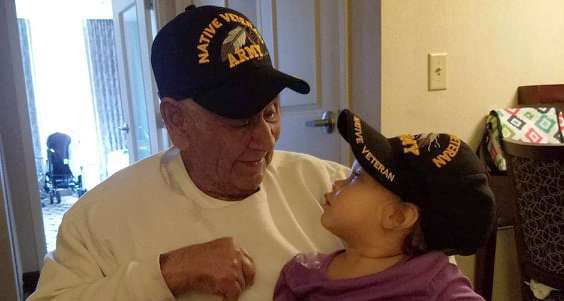 Levi Oakes did not share the stories of his time as a code talker with his children or grandchildren, as he had been sworn to secrecy with the military. It was not until later in life that Oakes started opening up about what he did during the war. (Courtesy Teresa Oakes)

The last of the Kanien’kehá:ka code talkers, Louis Levi Oakes, was laid to rest in Akwesasne. He was 94 years old.

“He was always known to drive “turtle slow”  everywhere on the rez,”  granddaughter Teresa Oakes told The Eastern Door. “There was always a line of cars following him while he cruised at the speed he wanted to.”

When Levi Oakes was 18, after war had broken out across the Atlantic and Pacific oceans, Oakes joined the United States military.

Along with hundreds of other Onkwenhón:we speakers, Oakes served as a code talker during the Second World War.

The role of a code talker was paramount during the conflict, as the Allies needed to ensure that Axis forces (Germany, Japan, and Italy) could not intercept vital messages and use the information to turn the war in their favour.

During the war, Oakes was sent to the Pacific Ocean theater – where the Allies were engaged in warfare with the Empire of Japan – and relayed coded messages in places like the Philippines and New Guinea.

Due to the relatively small number of fluent speakers, Kanien’kéha became an important language for the Allies, and Oakes’ fluency resulted in the constant presence of bodyguards to ensure his safety during battle.

The type of coding that used Indigenous languages was known as a Simple Substitution Cypher, where an Indigenous word represented a single letter in the English alphabet. However, less important messages were simply translated from English to Kanien’kéha, and vice versa.

By 1945, the war had come to an end, and Oakes spent some time in American-occupied Tokyo before finally receiving an honourable discharge from military service in 1946.

Oakes returned to Buffalo and took up the ironworker trade, a pathway that many Kanien’kehá:ka men pursued and continue to pursue. Oakes slung steel for 30 more years.

In 2008, the United States Congress passed the Code Talkers Recognition Act, which requires “the Secretary of the Treasury to strike Congressional Medals in recognition of the dedication and valour of Native American code talkers in the U.S. Armed Services during World War I and World War II.”

Gold medals were given to the Indigenous Nations and Tribes that had code talkers who served, whereas silver medals are awarded to the code talkers themselves.

Oakes received his Congressional Silver Medal in 2016, along with 16 other late code talkers from Akwesasne.

Oakes did not share the stories of his time as a code talker with his children or grandchildren, as he had been sworn to secrecy with the military. It was not until later in life that Oakes started opening up about what he did during the war.

Simply, Oakes put aside the code talker, and instead assumed the role of fatherhood, ensuring his children were raised well.

“He was good, he was a father,” said Oakes’ daughter Dora. “He showed me how to work.”

Louis Levi Oakes lived a humble life, and he did not seek out glory in war, rather he simply fought and served to ensure the greater good of the world. Oakes followed the path that the warriors of the Haudenosaunee Confederacy took; he embraced the responsibility to protect the people from harm.