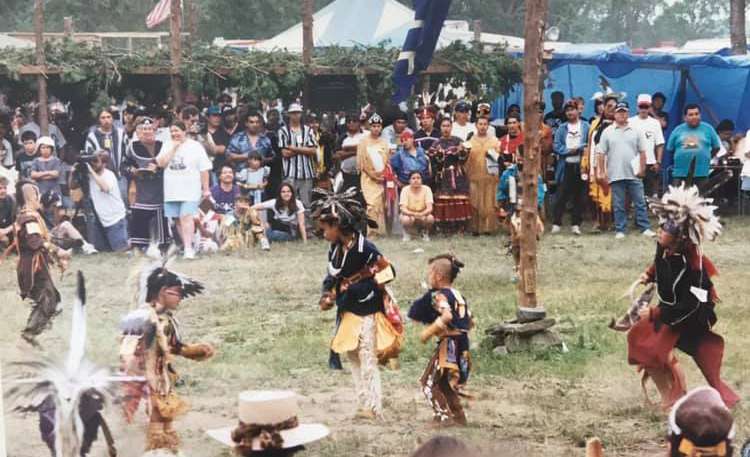 An aspiring teenager from Verdun, Felicity Hamer took the bus across the bridge in the mid-‘90s for her first look at an Onkwehón:we powwow a half-decade after Kahnawake began hosting the event. (Courtesy Felicity Hamer)

Felicity Hamer grew up across the river from Kahnawake, but had never crossed the river to visit the community.

“Despite growing up nearby in Verdun, it was the first time I’d ever been to Kahnawake (certainly to a pow wow!),” said Hamer of her trip around 1996 that resulted in this week’s Blast from the Past photo.

“I just remember being blown away.”

Hamer was in Grade 11, and wanted to start practicing photography, and thought Kahnawake’s powwow would gift her some ideal situations and subjects to shoot.

After posting the picture on the Old Kahnawake Photo Share Facebook page, community members began identifying some of the people in the picture including the young dancers, and those watching.

Brad Thomas is dancing on the bottom left with the eagle visor, and Luke McComber is to the left of the centre next to the pole.

“We used to travel all over: Connecticut, New Jersey, New York, Six Nations,” said Peter. “It was a good way to get away for the weekend.”

Peter added that the Montreal Gazette published features leading up to the powwow, and a photo of his daughter dancing made Page 1 on the Gazette’s Monday edition following the weekend.

Martin Loft (another photographer whose work chronicles the local history in the ‘90s) is watching in the purple shirt with a camera strap around his neck as always. He noted that the man on the far right of the picture is the late Lanny Mitten.

“At the time, a condoled Cayuga chief from Six Nations,” commented Loft.

Naomi Rice-Mayo is watching, and remembers dancing in the early powwows.

“I miss dancing so much,” she said. “We always met so many people from all over the place. That dress I’m wearing belonged to my great aunt Esther Kane. She passed away over 30 years ago, and it was an honour and a privilege to wear it.”

Hamer continued her passion for photography as well as a keen interest in Indigenous culture and issues. She attends the annual Kahnawake, McGill and Montreal powwows with her partner and two children, and has a number of friends in Kahnawake.

In addition to missing dancing, Rice-Mayo misses the affect her dancing had on members of her family.

“It brought tears to my grandmother’s (Josie Kane Rice) eyes every time she saw me dance in it,” she said.