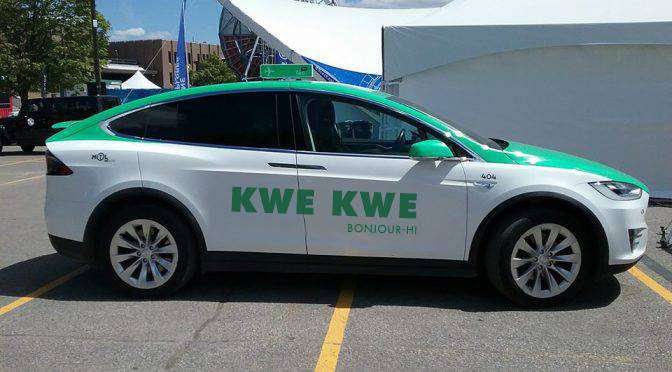 Donovan King has singlehandedly turned Montreal tourism on its side as he pushed for Indigenous recognition, like here, where he changed the face on a Montreal cab via Photoshop. (Courtesy Donovan King)

Montreal’s designated tourism school has decided, after much pressure, that its curriculum is in need of an overhaul.

Beginning this summer, the Institut de Hotellerie et Tourisme du Quebec (ITHQ) will revisit the content of its part-time, 240-hour course that equips prospective tour guides with crucial information about the city’s history.

For years now, critics have drawn attention to the course’s scant mention of Indigenous history in Montreal pre and post-colonization. The 40-hour segment of the tourism course specific to Montreal instead emphasized the creation and development of New France.

The course is normally offered every two years, but due to increasing demand – and a number of older guides nearing retirement – it will likely be offered again this fall, with new emphasis on the city’s inextricable links to Indigenous peoples, particularly Kanien’kehá:ka.

And it was all thanks to one man, Donovan King.

For years, King has relentlessly pushed for inclusion among his fellow guides, as well as in the content they present to tourists. This includes territorial acknowledgement

“We’re always open to improving things,” explained ITHQ spokesperson Marie-Josee Lesage. “History is something that is always in movement, and we’re always in the process of learning things. There are things we learned in school that we know now don’t match up with the historical reality.”

“So we’re trying to always be in movement to improve,” she added.

The training program – mandatory if you want to become a card-carrying guide – consists of lectures across a number of fields, including art, physical geography, Montreal society, urban studies, architecture and public art.

Lesage credits King, an Irish-Montreal tour guide and historical crusader, for raising the alarm about potentially out-dated practices in the city’s tourism industry.

Last week, King was handed another victory as Hydro Quebec announced they would cede a vacant lot for transformation into a proper memorial for Montreal’s Irish immigrants and victims claimed by famine and a typhoid epidemic in the 1800s.

However, according to King, it’s important to continue to push for recognition of his Indigenous peers, since the Mohawk community reportedly extended a hand – and $150 at the time – to help out the Irish during their time of need.

“I am declaring victory for convincing both the ITHQ and Tourisme Montreal to start updating their systems to be more inclusive, diverse and intelligent when it comes to Indigenous issues and other issues of misrepresentation,” King said.

But the victory comes after a long saga of resistance, he said.

“The APGT is the only part of this (tourist) monopoly triangle that refuses to engage,” King added.

A few weeks ago, King was ousted from the McCord museum after attempting to renew his guide license at the APGT’s annual general meeting. Despite being a paying member of the organization, King said he was unceremoniously – and unjustifiably – ex-communicated by the group on social media and through email chains.

The APGT has not responded to The Eastern Door’s requests for comment on the matter, and have not restored King’s membership privileges.

With the backing of prominent human rights lawyer Julius Grey, King is working on this, as well as drawing attention to the limitations caused by-law G2 – established in 1960 to regulate the tourist industry in Montreal. As King puts it, the standing law creates a “mostly white monopoly/cartel of guides with Settler culture ancestry.”

In the meantime, he’s also spearheading the creation of Montreal Tourist Guides 2.0, a new group aiming to hire exclusively First Nations, ethnic, or marginalized peoples throughout the city.

Though Lesage says it’s currently unclear how the ITHQ will proceed with their revision process, it’s become clear – through King’s urging and suggestions – that it’s time to reconsider the information being disseminated.

“In the course revision we will make sure that (Indigenous history) is well integrated, and that all instructors are aware that it’s important to aspects of our history,” Lesage said.

“Indigenous history in Montreal is really a part of us,” she added.