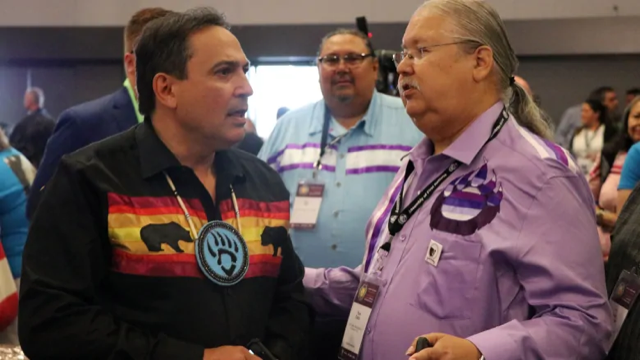 Special to The Eastern Door

During the 2015 federal campaign the Liberal party of Justin Trudeau made a number of big promises in their Indigenous Platform, notably that a Liberal government will:

Aside from the MMIWG inquiry, which has been handed off to a federally-appointed commission that, according to critics, seems to be floundering, the Trudeau government has operated in secret and in a top down unilateral approach to interpreting and implementing the Liberal 2015 Indigenous Platform promises by entering into agreements with the three National Indigenous organizations (First Nations, Metis, Inuit).

The First Nation rights holders – the people – have been bypassed and misled in the process for the past three years by a Liberal public relations campaign of slogans and funding announcements.

The prime minister also announced there will also be policy changes. Trudeau also stated the development of the “Framework” was to be done through a “National Engagement Process.”

The “National Engagement Process” to develop “Framework” legislation has proven to be a highly selective process that has been widely-criticized by First Nation peoples, many chiefs, and has now been rejected in a resolution passed by consensus at the AFN Special Chiefs’ Assembly in Ottawa last Thursday, December 6.

What is the “Framework”?

However, in my opinion, the AFN resolution rejecting the federal framework is too narrow, focusing only on the engagement process, proposed structure and content of legislation contained in a federal “Overview Document” from September 2018.

According to that September 2018 document, the federal “Rights Recognition Framework” law will – if passed – form the basis for ALL RELATIONS between the federal Crown (government) and Indigenous Peoples (First Nations, Metis, Inuit) including “pre-1975” Treaties. And as a pan-Indigenous law, will contain federal definitions/interpretations of “key terms” like “Inherent Right to Self-Government,” “Self-Determination,” “Aboriginal Title and Rights,” and “Treaty Rights.”

The federal government considers Indian Act band councils “non-governing” because many of Canada’s First Nation communities are still governed by the Indian Act and are referred to as Bands.

This means that their reserve lands, monies, other resources and governance structure are managed by the provisions in the Indian Act, as such, in order to be federally-recognized as an “Indigenous government,” the federal government is seeking to have Indian Act bands convert into municipal type governments through one of three options:

A comprehensive agreement on self-government; or

Under the proposed federal Rights Recognition Framework law a federally established advisory committee or institution would be created to decide what Indigenous Nations or “Collectives” would be federally-recognized under the federal “recognition” process, and would have the authority of a government possessing “the legal capacity of a natural person,” meaning a federal corporation.

This will all be subject to agreements with the federal and provincial governments (where their jurisdiction is affected). The federal legislation will include a “list of powers” for “Indigenous governments,” which can be amended by the federal government.

The Trudeau government’s framework is not simply the proposed federal Rights Recognition law. In my view, it includes massive changes to federal structure, laws and policies the Trudeau government has been unilaterally implementing for the past three years.

Even though the proposed federal law is delayed for now, the Trudeau government is proceeding with several national processes, which remain secret to First Nation Peoples and will be used by the federal government in developing its “new” policies and laws.

A Bilateral Mechanism – this is an AFN-Federal Cabinet Committee where the AFN national chief and prime minister meet annually, and AFN delegations meet federal ministers semi-annually on shared priorities as set out in the AFN-Canada MOU. In this joint committee, AFN is basically a rubber stamp because it does not control the funding, pen or process. Canada is using and funding the AFN to manufacture the consent of Indigenous peoples to forge ahead with top down processes, giving the illusion that we want what they are developing for us.

10 Principles Respecting the Government of Canada’s relationship with Indigenous Peoples – released without consulting First Nation chiefs or communities, including the national Indigenous leaders who are supposedly the Trudeau government’s partners.

Dissolving/Splitting Department of Indian Affairs & Northern Development into two new departments – Announced without consultation with First Nation chiefs or communities, including the national Indigenous leaders who are supposedly the Trudeau government’s partners.

Establishment of 70+ Recognition of Rights and Self-Determination Negotiation Tables across Canada – These were initially called “exploratory tables.” The federal government initially kept it secret who is involved in the “discussions,” they have now made the list public, but not the details of what is being discussed at these tables, reportedly the outcomes from these tables will contribute to the planned policy and legislative “Framework” affecting Indigenous Peoples.

According to an online federal list, in the Quebec region, the Kitigan Zibi Anishinabeg, Maliseet of Viger, Mi’kmaq of the Gaspé region of Quebec, Mohawks of Kanehsatà:ke and the Mohawk Council of Kahnawà:ke are at the 70+ federal “Recognition Tables.”

I have no doubt the MCK, like many First Nations, has likely been advancing its position on the rights of Kahnawa’kehró:non in good faith, but the Trudeau government has a national “reconciliation” plan to develop a watered down version of the United Nations Declaration on the Rights of Indigenous Peoples by unilaterally developing a Canadian definition.

This was made clear in May 2016, when the federal Justice Minister Jody Wilson-Raybould told the United Nations Permanent Forum on Indigenous Issues:

“There is a need for a national action plan in Canada, something our government has been referring to as a Reconciliation Framework…And we do not need to re-invent the wheel completely. …Within Canada, there are modern treaties and examples of self-government – both comprehensive and sectoral. There are regional and national [federally created] Indigenous institutions that support Nation rebuilding – for example in land management and financial administration.” (emphasis added)

Keep in mind these changes to structure, policy and law if adopted, will affect generations to come!