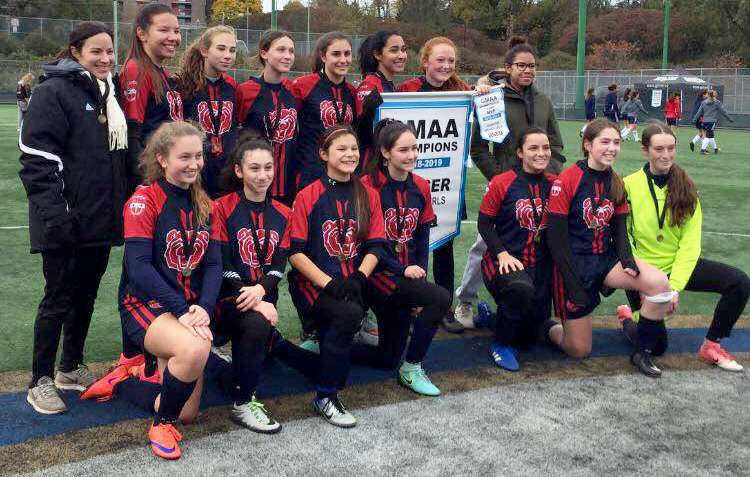 On a cold Saturday afternoon the Kuper Academy Kodiaks’ girls soccer team needed to fight out one more win to cap an unbeaten season and win the GMAA banner.

College Ste. Anne, a team that had also not lost all season, stood in Kuper’s way.

“With the cold weather, and the other team is also really skilled (it was tough),” said Kuper’s Gracie Diabo.

Far from dominating like Kuper did in its 8-1 thumping of Sacred Heart in the semis, the Kodiaks had to buckle down and work for each goal, as the team was missing two key players.

Kuper got one to take the lead in the game, and then another for insurance, however, and held on for the 2-0 championship win.

“It wasn’t a game we dominated but we came out on top,” said Diabo.

Joining Gracie on the team from Kahnawake was Jillian Diabo this season, who was promoted to the older team from the Bantam level for three games, including the final.

“It was a really good season playing with the Midgets even though I only played three games,” said Jillian. “The Midget team was an amazing team, and they made me feel welcomed and like I was a part of their family.”

Jillian won a banner with the Bantam team last year and now is two-for-two in high school.

“In all honesty before the game I was thinking to myself, ‘it’s okay if we don’t win it because I won it last year, so I’ll still be happy to get second,’” said Jillian.

The team is an ideal blend of talent, and should be a threat to make return to the podium next season.

“Our team this year was comprised of really good athletes and we work well together,” said Gracie.

Kuper Academy’s softball team tapped its impressive collection of Kahnawake talent to field a GMAA team for the first time in a decade.

The Kodiaks almost pulled off a dream debut season in the finals Tuesday, but came up just short against John Rennie, losing by a trio of runs.

After White got on base with a thundering single to the middle of the outfield to put two baserunners on, Zachary blasted a ball over the outfield, bringing three runs in to lead 6-5 in the sixth. The Rennie fielders’ arms were no match for Zachary’s speed and it looked like Kuper may win it.

Unfortunately for Kuper, however, Rennie answered in the bottom of the sixth, scoring four runs leaving one inning for the Kodiaks to respond.

Rennie’s pitcher then locked in, and when Breeze Lahache came to the plate with two straight strike outs behind her, chances of making up the three runs was slim.

Lahache became the third strike out victim of the inning, and Rennie hung on for the banner, winning 9-6.

The game was an emotional roller coaster with each team pushing leads only to lose them.

The Quebec Rebelles AAA fastpitch catcher knows the team could have won the game with more focus after big offensive plays.

“It was rough,” said Zachary. “When we started scoring, everyone got too confident and then they started gaining points because we weren’t properly holding them back. That made us not do as well as we could have.”

Coach Neil Dickson was more than happy to have Kahnawake’s stars on the team.

“It’s never a negative, that’s for sure,” he said. “Definitely some of the stronger players on our team were some of the Kahnawake AAA players, and even some of the players who never played before. I was proud of every girl on the team, but it was definitely good to have some of those girls come out.”

Dickson was impressed at how well his team did considering Kuper had not put a team on the field in over a decade.

“We had a great season,” said Dickson. “We fought really long, we fought really hard, and I’m excited to come out next year and show them what we can do.”

High school sports always provide a mix of experienced players and those trying it for the first time.

Kuper’s team was no different.

“You could see the difference in playing,” said Zachary. “We had a lot of new girls that were new to softball, and they all played well. The start of the season was a little rocky but we pulled through to make it to the finals.”