You are here
Home > Sports > Mohawks spur Cougars to championship 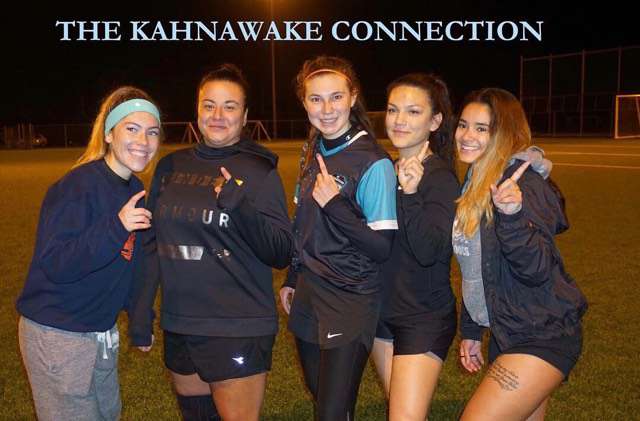 In the end, the Chateauguay Cougars Senior women’s soccer team cruised through the LSM (Ligue des Soccer de la Monteregie) playoffs to cap of a gold medal win Saturday, taking a few bruises and knocks for the team along the way.

Kahnawake forward Paxton Phillips both scored the fourth and final goal against St. Hubert Saturday, and had a tangle with a St. Hubert back that may have prematurely ended the game.

“The other team ended it because I hip checked and injured their defence and they got mad,” said Phillips.

The hip check came after an intense game that Phillips was up against a physically big defence that had no problem throwing their weight around.

“It was more intense than usual,” said Cougar Avery Diabo. “The other team was rough in terms of pushing with their arms and constantly elbowing us.”

Diabo and Phillips reunited with Autumn Bomberry on the Senior team, having played together in the minor system together, and Phillips’ cousin Kenzie Kane played her first year as a Senior for Chateauguay.

“I was very happy playing with these ladies,” said Kane. “Inspiring, I find. Like, they still have it in them, and some of them are old, and still kicking it.”

Kane twisted her knee with 15 minutes to play in the second half, forcing the defender to the sidelines. Kane joined Leblanc in grabbing an ice pack as Leblanc also injured her knee in the game along with one other player.

The injury was frustrating for Leblanc, who had just recovered from a leg injury to play this year.

“Just a wrong move, I reckon,” said Leblanc of how it happened. “Healing up in time to start up the winter season. Just have to make sure I build up the muscles around it, probably by biking.”

Leblanc was impressed by how the young Mohawks blended in to the Senior ranks, and contributed to the Cougars’ victory.

“Kenzie was instrumental at defence and Pax was needed on offence,” she said. “They made all the difference in the season. Wouldn’t have been the same outcome without them.”

The girls plan on regrouping with the Chateauguay team for the winter league in the coming months.