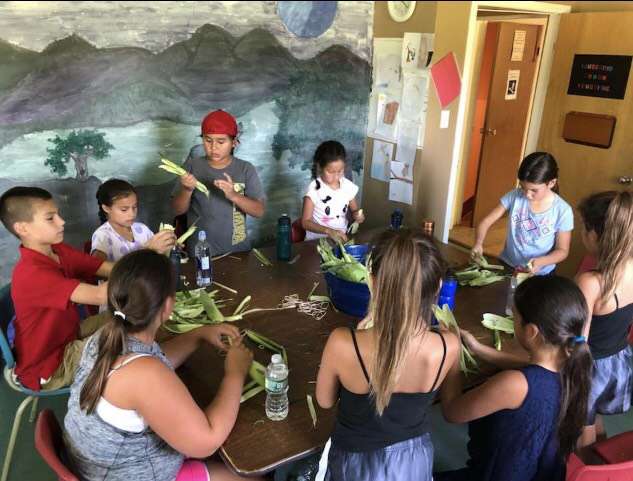 Kids continue to embrace the unique style of learning offered by Karihwanoron, which is celebrating three decades of instructing young students in the community in their language. (Lachlan Madill, The Eastern Door)

“It started in ’88 by a small group of parents who wanted to start their children at a younger age than school age,” said Karihwanoron administrator, Joely van Dommelen. “They wanted to school their kids in Kanien’kéha because there was no other school in Kahnawake that would do that under four years old.”

She said the idea behind it was to teach children in a traditional setting, and the parents who started it felt that starting kids at age two, when they were just developing speech, was the best age to start.

“It’s a home-like environment, we’ve tried to mimic how our ancestors learned the language. Two teachers per class, no matter what the size of the class. There are cultural activities and there’s academics,” said van Dommelen.

The program began to evolve and included classes which were all taught in Kanien’kéha.

“Once the kids started getting older we did start to incorporate academics we borrowed and purchased curriculums through the Education Center,” she said. “We didn’t use it as they did, like the government saying ‘you have to learn this this and this.’ They use it as guidelines and it’s been successful.”

The program accepts local children from the age of 18 months and up now. The program is finished once the children graduate from grade six. She said most of them continue on to Survival School, although some go to other schools.

The biggest struggle during the past three decades has been funding. It’s been a constant fight to find money to keep the program going.

“Because we run a little bit different than the other schools we’re still struggling to convince the government that it works,” said van Dommelen.

Parents signing their children up know it’s a language program, which takes commitment and participation from the families.

“There is a little bit of sacrifice parents take by having to teach their children some of the main ‘school’ subjects further at home or with tutoring. However, the outcome of carrying on our teachings for the future generations are worth it,” she said.

“Our enrolment is a little low right now, mostly due to fundraising. Some parents decide it’s not for them because we have to fundraise to make the year work. Everybody is busy these days, so it’s hard to keep a full classroom,” said van Dommelen.

“This year we had an old, one room school house because we have two classes that have three grades in them,” she said.

There is a grade one, two and three class and a four, five and six class for the elementary students, which have 39 children in total. There are another 15 kids in the pre-nursery and kindergarten, which is housed at Step by Step Child and Family Center.

Every year the search for money continues.

“Right now we get funding through Step by Step for under four-year-olds and partial funding for the older children through the federal government, fundraising, and donations,” said Van Dommelen.

Even after 30 years, they are still trying to convince the federal government the program works.

“Our wish is to be able to have government funds to run as an alternative program,” said Van Dommelen.

For now she said staff hopes to work with the new council to help persuade the government to give full funding for Karihwanoron.

Van Dommelen added that despite the difficulties, it’s a program that’s important to Kahnawake. That has also been reflected in the support for Karihwanoron.

“For 30 years we’ve been successful but not without our community. Our community is a big help,” said Van Dommelen.