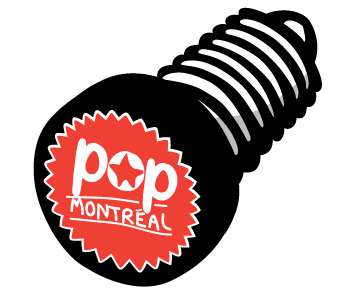 What is that? A screw? A fuse? A puck with a medical problem? (Courtesy Pop Montreal)

Alanis Obomsawin was born in 1932 and a large part of her life has been spent as an advocate for Native issues. She has done this through art, music, and written word, but she is most well-known as a filmmaker. A listing of the awards she’s received could easily take up this entire column, and the sources of those awards are just as diverse as her work has been.

The awards have come from educational institutions, several levels of government, human and Native rights groups and the film industry. There are even two film awards in her name: Cinema Poltica has the “Alanis Obomsawin Award for Commitment to Community and Resistance,” and the ImagineNATIVE Film & Media Arts Festival has “The Alanis Obomsawin Best Documentary Award.”

During the upcoming Pop Montreal festival you have a couple of opportunities to see and hear what she does.

A big part of Pop Montreal is “Film Pop.” As the title implies, it focuses on films. On Thursday, the 27th you can see two of Obomsawin’s films, “No Address” from 1988 and “Mother of Many Children” from 1977. Run time is under an hour for each of them. There will be a “question and answer” session with Obomsawin after the screenings.

On Friday, September 28, it will be live music in a show at the salle Ludger-Duvernay in Monument National. The album “Bush Lady” from 1988 has been recently re-issued and that will be the main focus of the show. Her music contains a range of elements like pop, jazz, and folk. “Bush Lady” includes traditional Abenaki songs along with a few of her own compositions.

Anishinaabe singer/songwriter/guitarist, Ansley Simpson, and flautist, Irma Vos from Utrecht, Netherlands open the show. In case you didn’t know (like me until about an hour ago) the word “flutist” is older and still correct, but most of the English world uses “flautist.”

Another film is “Bad Reputation.” Released earlier this month, it’s a documentary on Joan Jett. The title is taken from one of her songs. Regular readers of this column may remember that in my opinion Joan Jett is THE QUEEN! As much fun as “The Runaways” movie was (a dramatized bio-pic of Jett’s earlier career) this one will have a little more substance to it. September 26. 8 p.m. Cinema Moderne. $12.

Live music. Shtreimel. September 27. Jardins Gamelin (corner of Berri & Ste. Catherine). 7 p.m. An outdoor freebie! Jewish roots and Turkish blues. Not familiar with Turkish blues? Neither was I but I saw this band recently at the Upstairs Jazz Club. Great musicians and a whole lot of fun.  Can’t beat the price.

All of the above are open to all ages. Most of Pop Montreal is in bars so restricted to 18 and over. Let me repeat, there is something for every taste. Check out their website for much more.