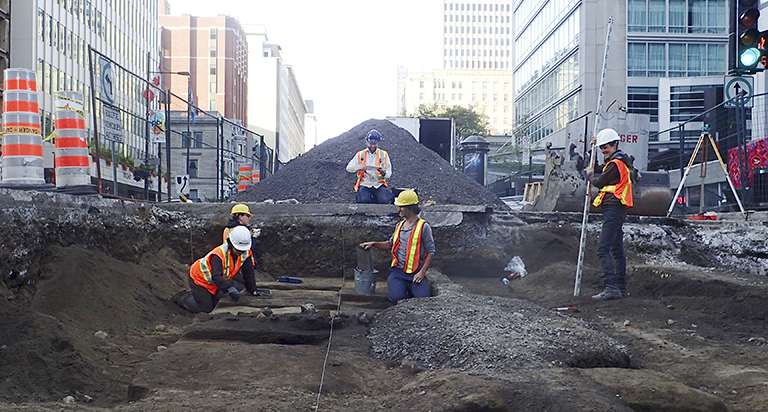 After 11 long months of digging, archaeologists from the private company Ethnoscop have publicly announced the discovery of thousands of fragmented artifacts of a prehistoric St. Lawrence Iroquoian village.

Roland Tremblay, an archaeologist from Ethnoscop, told The Eastern Door that the excavations on the corner of Peel and Sherbrooke St. started during the summer of 2016, the same time road construction was underway.

According to Tremblay, the city of Montreal commissioned the excavation because of the close proximity of the site to the Dawson Site, on the corner of Metcalfe St. and Maisonneuve Boul.

“The Dawson Site was the very first archaeological discovery made in the city in 1859. Road workers were redoing Metcalfe and that’s how they discovered that site by chance – pure accident,” said Christian Gates St-Pierre, archaeologist and professor at the University of Montreal.

Gates St-Pierre believes these recent discoveries are probably an extension to that original Dawson Site.

The archaeologists are now working on finding exact dates for the artifacts – which range from shards of pottery, ceramics, animal bones and work tools.

“It’s a nice challenge because we didn’t expect that. I would have thought it would have been the late 1500s,” said Tremblay.

Archaeologists had hopes that the village found was that of the elusive Hochelaga village, but seems to be too old to be possible.

Gates St-Pierre is the head of the Hochelaga Project at the University of Montreal in search of the mystical village, but also any other traces of past Onkwehón:we occupation.

Gate St-Pierre said that there are many hypotheses of where the village could be – from Outremont to Parc Lafontaine to the surrounding areas of Mount Royal.

The unearthed artifacts on Peel and Sherbrooke are, however, still major discoveries because of the general lack of Indigenous sites on the island of Montreal, according to Gates St-Pierre.

“In a philosophical point of view, it’s always significant to find human occupation in a city like Montreal where one would think everything is destroyed by the infrastructure. But, no, sometimes we’re lucky and we still find some old soil that is not too much disturbed. I think it’s very fantastic,” said Tremblay.

Plans for a new round of excavations for the named Peel Street Project can start as early as next week.

“The city also wants to take the opportunity to commemorate its relationship with the Native people,” said Tremblay.

Christine Zachary-Deom, a former elected chief of the Mohawk Council of Kahnawake, has been in the forefront of the repatriation movement of the remains and artifacts found in the city.

Gates St-Pierre told the Eastern Door that there is a new research project in the works that will heavily involve Zachary-Deom and the Kahnawake community.

“It’s shouldn’t be just archaeologists, especially white archaeologists, deciding what archeology about Native Americans should be. We have to work with Native communities and we need to involve them on an equal basis, and consideration of what their research questions are or could be, and how we can articulate their questions with ours, “said Gates St-Pierre.

Zachary-Deom is interested in having more Mohawks present in the archaeology sites and is optimistic with the addition the white pine tree, representing Indigenous people on the Montreal flag, and to their commitment to returning Indigenous remains and increase their presence on the island.

“It’s wonderful to see them taking action,” said Zachary-Deom. “They want to make changes that will make a difference.”

“This project is us working together,” said Gates St Pierre. “A few decades ago that would have been impossible. We were separated communities for political, historic, linguistics reasons. But that’s the past, now we have to work together for the future and for the benefit of our communities,” he said.