It’s the most wonderful time of the year.

It’s the day when K103 Radio sets up at the Kanien’kehá:ka Onkwawén:na Raotitióhkwa Language and Cultural Center library and broadcasts an entire morning in Kanien’kéha. 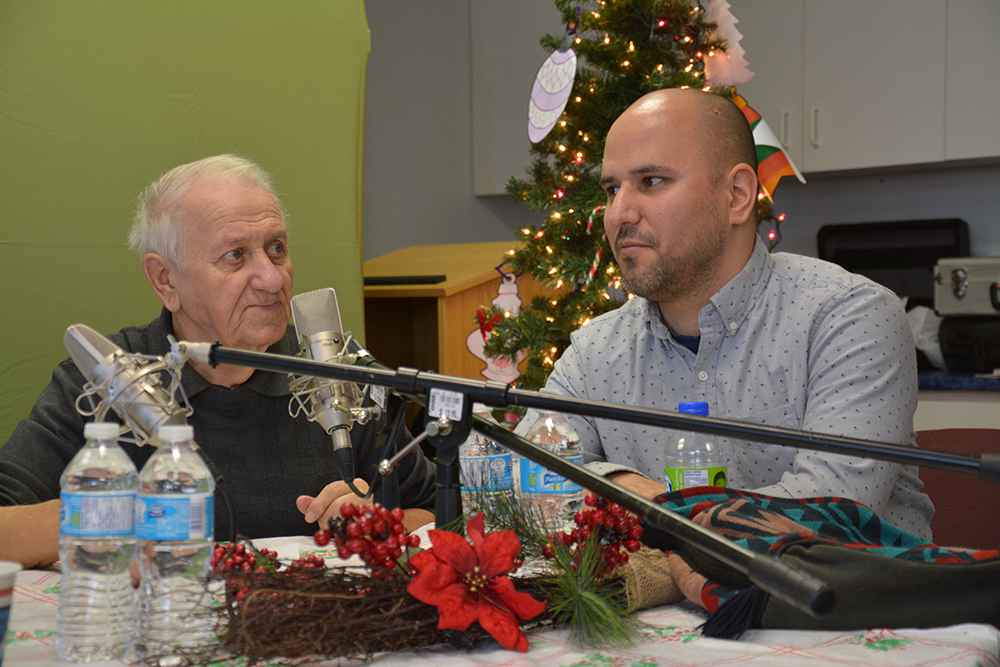 “It was really fun,” said Rice, who sang with her classmates on air. “It’s so nice to see the elders come out and speak on different topics and learn different things every year.”

As always Joe McGregor and Leo Diabo took the mic twice, first as hosts telling stories and chatting in the language, and then from noon to 1 p.m. adding the musical entertainment with Edward “Fine Day” Jacobs.

The two men have become masters at chatting without a script, and being able to pivot from one topic to the next. 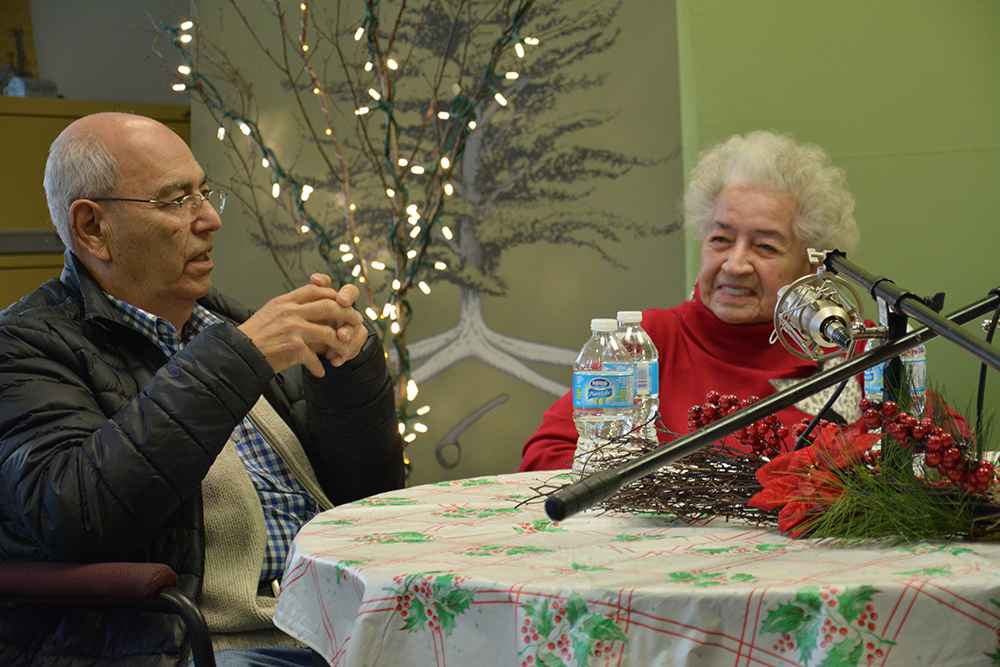 “It’s just whatever comes to our mind is what we talk about,” said McGregor.

“Even if we say, ‘well this what we’re going to talk about or this or that,’ and people call us, our story breaks up,” said Diabo.

Wednesday, the two men discussed the season and told stories from Kahnawake’s past, which, much like The Eastern Door’s Blast from the Past page, are always popular.

“This is what the people want to know; how people grew up in our era,” said McGregor.

The two men praised the younger generations, much like the Ratiwennahní:rats students, who, they said, continue to improve. 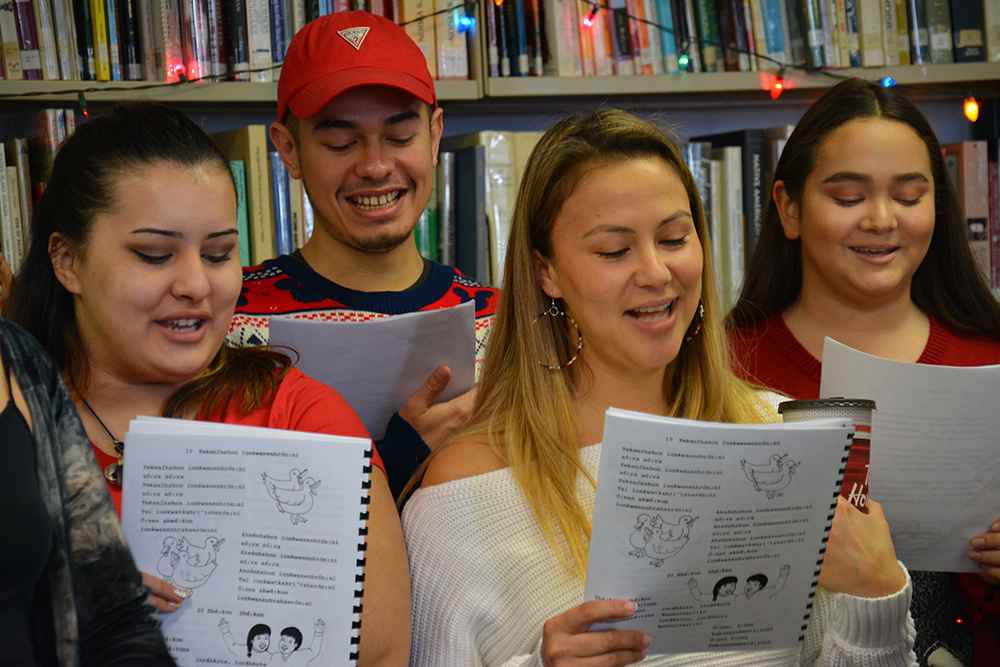 “What I notice now is they’re speaking much better than last year already,” said Diabo. “A little while ago when they were singing. The words are said very well. It’s changed.”

McGregor credits the students’ improvement to quality teaching that builds from the ground up.

“You got to learn how to speak first before your write, and you’ve got to crawl before you walk,” said McGregor.

Rice spoke about hearing the difference being raised in the language makes, but appreciates the options she had growing up. 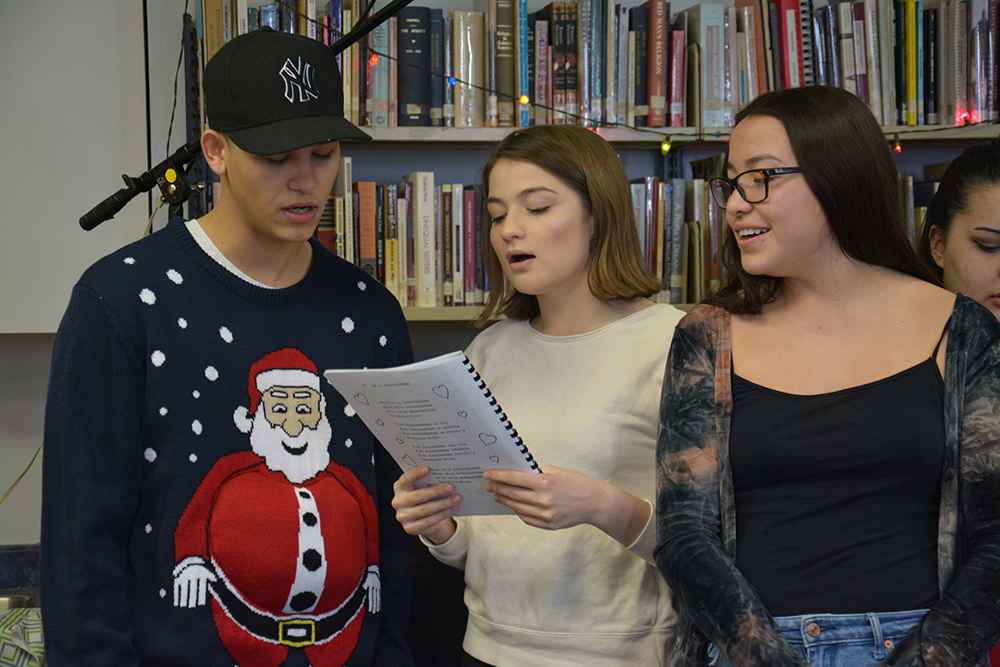 “For elders it was more a way of life when they were younger, whereas with us it’s a second language, but I definitely had a good background because I went to Karonhianónhnha tsi Ionterihwaienstáhkhwa, and that helped me a lot,” said Rice.

Rice said there is no pressure to be perfect when speaking, and those with more fluency such as Diabo and McGregor are always quick to help.

“That’s how we learn: make mistakes,” she said.

For the elders, speaking the language on air is a gift to those learning or wanting to learn a phrase, word or story in Kanien’kéha.

“We’re trying to pass on as best we can the old words and the little things that matter,” said McGregor.