Even Green Bay Packers fans had to admit they cheered for one Raven Sunday, as the reigning Miss Indian World performed at halftime during the cheesehead’s game against Baltimore. (Photos courtesy Raven Swamp)

Though she may have hid her true colours football-wise Sunday, Miss Indian World Raven Swamp donned her people’s colours and pride and performed at halftime in the Green Bay Packers v. Baltimore Ravens game.

Swamp admitted she actually cheers for the Ravens (how can anyone blame her?), and hoped her presence at the game didn’t have anything to do with the lopsided 23-0 Baltimore win.

“I feel like it was because my name’s Raven, it may have had something to do with it, and I was wearing purple, my flag’s purple, so I was like, ‘oh gosh. Please don’t say my name. I don’t want to mess up the score,” she said with a smile.

“I am a Ravens fan. I have to go for them because we share the same name.”

Swamp appeared alongside dancers from the Oneida Nation at the legendary Lambeau Field that first broke ground, October 11, 1956, and has witnessed seven NFL championship teams.

“I didn’t realize how close the Oneida nation was to Lambeau field,” said Swamp. “I never thought I’d be there in Lambeau, but when I got there it was truly surreal.” 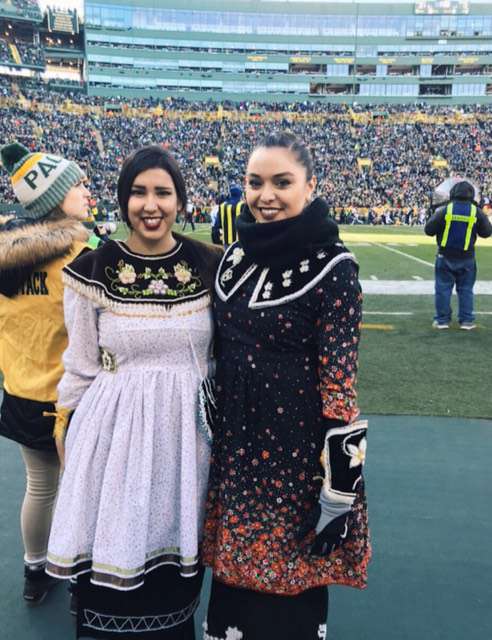 Swamp is no stranger to attending NFL games, often accompanying her boyfriend Tiio Hemlock to his beloved New York Jets’ home games. Being in the stands with the freezing fans in Wisconsin, and being among the Oneida royalty in a heated section, was a very different experience.

“I go to a lot of football games, so I always enter where you have to go through the security checks, and you’re with most of the people, but we entered in the back and the football players are passing by,” said Swamp. “I’ve never been so close to so many football players.”

There was a minor hiccup in her performance, though few likely noticed Sunday.

“I did have a wardrobe malfunction,” said Swamp. “The clip for the back of my yoke came off, and my yoke went flying, and all the beadwork from my yoke flew off, but I caught it in time, so I just played it off cool and pretended it was part of my dance.”

The Eastern Door had to ask, did you see/meet/touch/talk to injured Packers QB Aaron Rodgers?

“The closest I got to him was just him walking by and kind of nodding,” said Swamp. “We nodded at each other, so that was still pretty cool.”

Seeing fans from the field is something that ranks among the many events, ceremonies, and celebrations Swamp has attended as Miss Indian World.

“Being on the field, it was awesome,” she said. “I even felt like I wanted to put tobacco down on the grass. I was like, ‘oh my gosh. I’m here. This is sacred now.’”