You are here
Home > News > Kanesatake gears up for another fight

Ellen Gabriel and Oka mayor Pascal Quevillon argued over who had rights to disputed land Wednesday. (Photos by Peter Phillips, The Eastern Door)

When Ellen Gabriel passed by an area outside of what is the present-day village of Oka, on the edge of the famous Pines, she noticed a large cluster of pine trees planted by her ancestors in the 1800s that were cut down, with many others marked for future destruction.

And she had enough.

“No one passes by here because it’s out of the way,” she told The Eastern Door on Wednesday morning, the site of a confrontation with Oka mayor Pascal Quevillon, “but I do, on my bike, and when I saw that, I knew we had to do something to stop it.”

A group of Kanehsata’kehró:non arrived in support of Gabriel that morning and a strong disagreement erupted that saw Gabriel citing the historic, inherent Mohawk title to the land and Quevillon deflecting the responsibility to the federal government.

A Facebook live video by this reporter illustrates the entire half-hour back-and-forth conversation.

Quevillon told Gabriel the land issue is not his problem and he can’t do anything about it, and if development were halted anywhere in Oka, the town and its citizens would have to be compensated, and there could be legal action against his council. 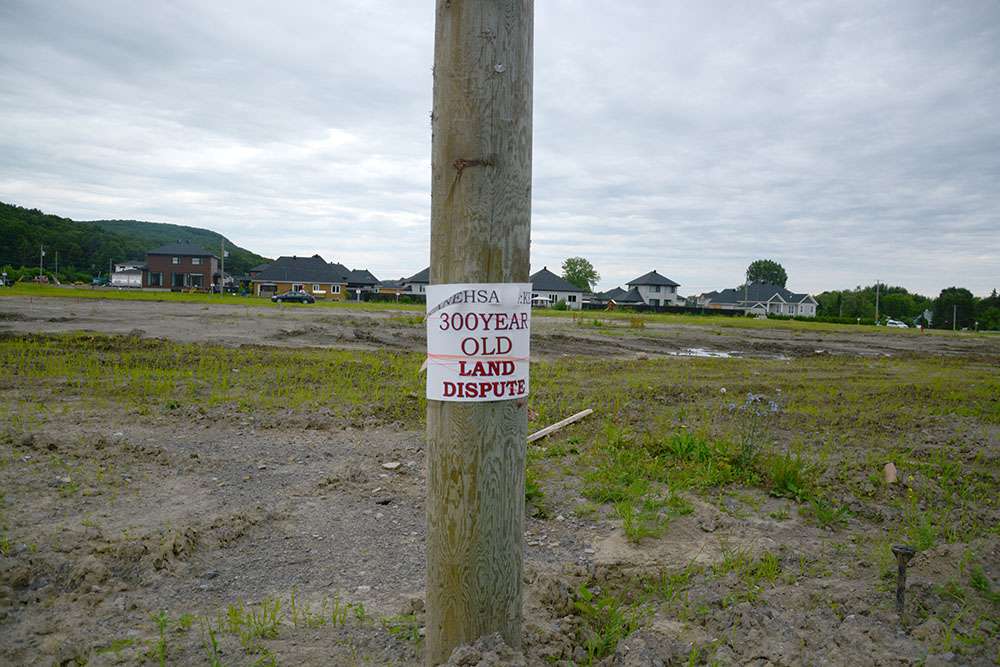 “This is land fraud. This is our land and we’re not going to allow you to build any more homes on our land,” said Gabriel.

“Never once have we asked for your keys to your home, but you have no problem stealing the land from our people……It’s not you who’s the victim, it’s the people in Kanesatake who are the victim.

“We told you last year any agreement you make with Serge Simon and the Mohawk Council does not apply to the rest of us…we’re not going to stand for this anymore.”

“Why not, we have nothing to explain to you,” Gabriel responded.

The Oka mayor later asked what the difference was between the trees that were cut at the site and the ones cut for cigarette stores on the other side of the Pines, which incensed the gathered group.

He also called the gathering of Gabriel and others a “spectacle,” and claimed since most of the people in Oka respected Kanesatake, they expect respect back, and that it was an insult when Gabriel told him it was Kanesatake land, and not his home.

Eventually, after a tense few minutes that saw community members repeatedly tell the mayor to leave, he finally did.

Gabriel and a group of supporters visited the town hall the day before, at the end of the annual march commemorating the start of the Oka Crisis, 27 years to the day.

SQ liaison to Kanesatake Guillaume Belisle was parked in the middle of the confrontation with Gabriel and Quevillon, and was quickly asked by Gabriel to leave.

He said he was there to “make sure things didn’t get out of hand.”

“Like any protest anywhere, we always send a police officer to make sure everything goes smoothly for security purposes,” SQ Sergeant Marc Tessier said.

“We do not get involved but our main focus is that the protest does take place, but in an orderly fashion. We’re aware of the sensitivity of the situation. We want to keep that good relationship and work with the community, if needed,” he said.

Developer Grégoire Gollin was reached by phone that morning.

Gollin and his company, Domaine des Collines d’Oka, own about 1,000 acres all over the town of Oka, including 27 lots of “more or less 10,000 square feet” in the disputed zone that sparked the latest protest.

He called it “maybe an opportunity to recall the Oka Crisis because we’re in July, but I don’t understand why,” when asked about Gabriel’s presence.

He said her actions that morning were like a ‘storm in a glass of water.’

“There was an agreement since the beginning (2003) with the band council that there would never be any development in the Pines. Never,” he said.

The pine trees that were cut down by Hydro Quebec were to make way for electricity to existing houses, said Gollin, not for more development.

“We want to live in harmony and peace, with dialogue with each other, like what’s been done in the past,” said Gollin.

“The work of the last phase of the Domaine des Collines will begin as of the week of April 10 with the opening of the streets of the Verger and the continuity of the street Belleville,” it says on the municipality of Oka’s website.

“The only thing that changed (since 2003) this week is the owner, the proprietor of the land, installed water and sewer, along with hydro lines,” said Quevillon.

“There was some work done to the land but there is absolutely no project planned for this land or to cut into the Pines. I’d be the first to protect it, and since the 25th anniversary two years ago, the grand chief and I vowed to protect it together.” 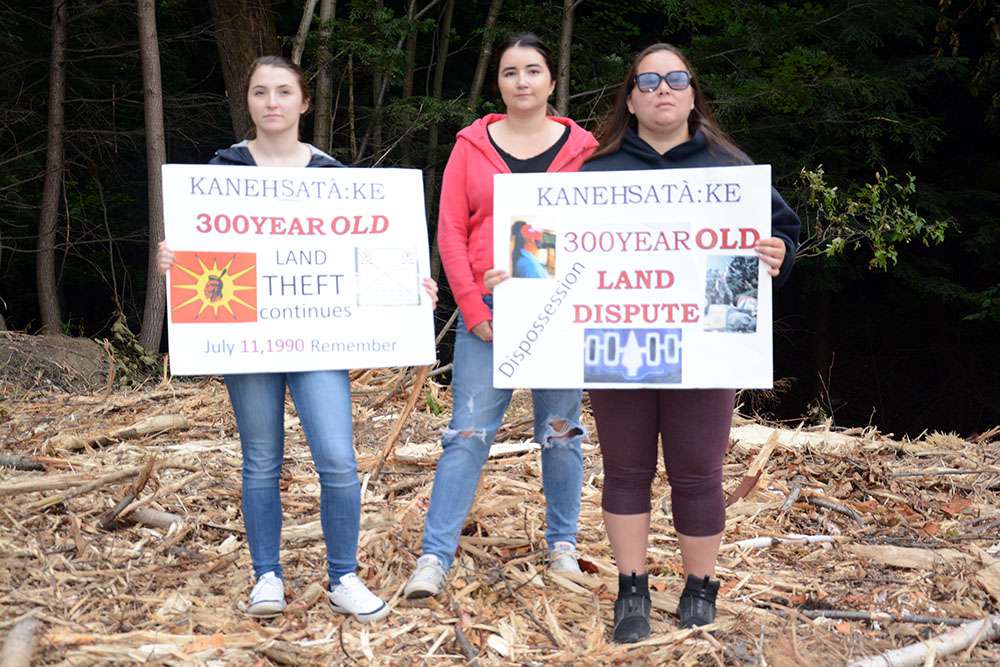 In a meeting last year, the mayor ignited a fire when he said that a 400-home project was still, technically, on the purview of the Oka council, and renewed the municipal bylaw that allows for development in a disputed area under land claim.

“There was a discussion last year between the mayor of Oka, which the community has no clue about the results,” said Gabriel. “Because he’s not informing the community, we have to take these kinds of steps, to say that the people are instituting our constitutional right according to Kaianeraserahkowa, the Great Law of Peace, to protect our land. They have refused to listen and we’ve tried to be patient, but we can’t be patient any longer,” she said.

“Mr. Gollin never had a right to buy that land.”

Simon said the municipality of Oka gave the permits for the development, but the council back in 2003 made sure part of the agreement was they wouldn’t touch the Pines.

Getting an injunction to halt construction will be looked into, said Simon, but he had yet to discuss it with MCK lawyer Peter Hutchens, who has been part of the Kanesatake land claim for decades.

“Those are our lands, there’s no question,” said Simon. “We have a historical right. We’re dealing with it right now in negotiations under the specific claim – even though I did not agree and did not sign us into the specific claim. It’s the only mechanism I have right now to address our historical grievances.

“The historical documents right now tell us we have the exclusive right to occupation. We didn’t abandon that right, we were pushed out by the Sulpicians.”

No chiefs were present at the demonstration Wednesday morning.

“I had a meeting here with some band members who have been waiting over a week to try to get in contact with me, but I’ve been so damn busy, if I had of said no to them again, it would have caused a huge headache,” Simon said, about why he wasn’t present.

“I do support them protesting, no doubt, but we aren’t just sitting on our hands here allowing this to go on. I’m going to look at all of the possibilities on my end, on my chair, on how I’m going to fight this.”

Simon denied any negotiations on land with Quevillon, something detractors have accused him of.

He also added certain lawyers told him an injunction would be very expensive and there’s no guarantee to get it, for a council millions of dollars in debt.

“I want our lands back, I want my children to have land and opportunities. I want that for every child in this place,” said Simon.

“It’s the only way we’re going to see peace within the community – our own development, our own partnerships. But that has to be done within a fair and just process. But that’s not what we’re being offered.”