Dozens of community members marched around the foot of the Mercier Bridge on Sunday afternoon, demanding justice for Tiffany Morrison. (Jessica Deer, The Eastern Door)

Eleven years have passed since Tiffany Morrison’s life was taken.

The 24-year-old mother was last seen leaving the Hiraki Bar in LaSalle taking a taxi back to Kahnawake on June 18, 2006. Her remains were found in a wooded area beside the Mercier Bridge four years later.

“We need to keep her story out there. We need to keep reminding people that we need people to be brave, step up, and speak up. For this to happen in our community, there has to be people who know,” said her sister Melanie Morrison, who organized Sunday’s march and vigil at her memorial site.

Melanie hopes Sunday’s event will rekindle Tiffany’s case, which is still active with the homicide unit of the Surete du Quebec, in conjunction with the Kahnawake Peacekeepers.

The family also has a $75,000 reward posted for anyone who provides information that leads to the arrest and conviction of the person responsible for her death.

“This happened in our community. It could happen to anyone. It’s happened from the east coast to the west coast, to a lot of our women and girls. A lot of the family members speak out. We’ve been fighting for decades, it’s got to stop,” said Melanie.

This is the second year in a row that Tiffany’s family organized a march and vigil in her memory.

“I think that the most important message when we have things like this – the march for my aunt – it’s a good reminder to our community of Kahnawake to remember missing and murdered Indigenous women (MMIW) is an issue all across Canada, but it’s also close to home,” said Melanie’s daughter Darian.

“There’s families here who have been affected and it’s easy to think it’s far away, but it happened here. We can’t forget that because we’re still trying to find answers.”

Hundreds of red butterflies made by students at Step by Step Child and Family Centre, Kateri School and Karonhianónhnha Tsi Ionteriwaienstáhkhwa last year still hung from the trees at the memorial on Sunday to represent missing and murdered Indigenous women. 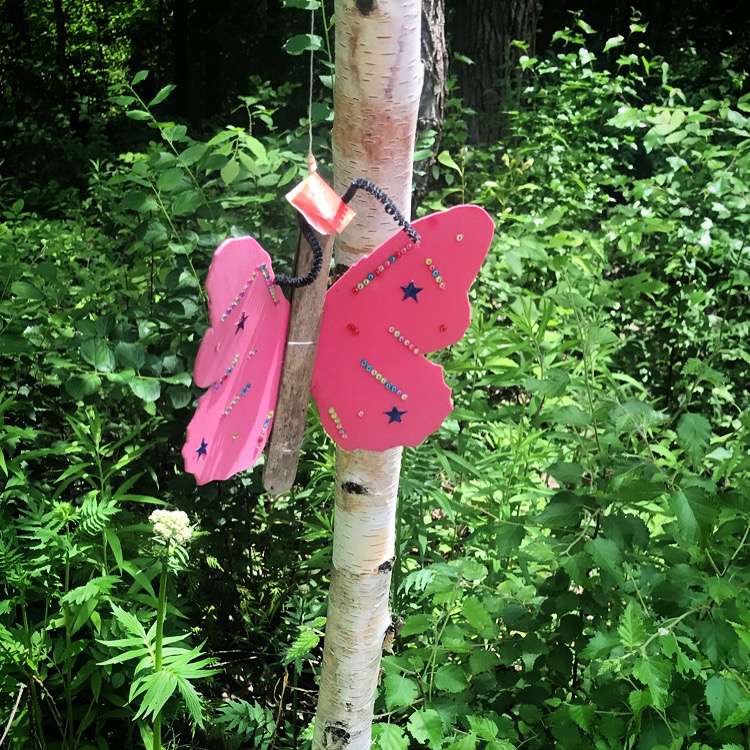 Melanie called on community members to do their part in helping end violence against Indigenous women.

“We need to speak up against domestic violence, against violence you see on the streets. Our women are targeted because nobody cares. We’re looked at as less, so when something happens to one of us, it’s not treated properly,” she said.

“We need to change that. It comes from everyone here saying ‘no more.’ Come to the vigils, speak out, write letters. You want to see change? You have to be the change.”

Shiann Whitebean was one of Tiffany’s friends when the two attended elementary and high school together.

“She did not deserve what happened to her,” said Whitebean. “She was a fighter and I know she would have fought with everything she had for her life. I feel that it’s our responsibility to honour her memory now and fight for justice in her murder. This could have happened to any one of us and we need to protect our community.”

Whitebean said as a community member, she feels pain and outrage that no one responsible has been brought to justice.

“I think it’s important to support the families directly impacted by the tragedy of a missing or murdered loved one in their struggle for peace and justice,” she said. “As a daughter, sister, aunt, wife, and mother I do not always feel safe in my own community knowing this can happen to one of us. I went to demonstrate that we all have a stake in this issue.”

Melanie also took the time to comment on the ongoing national inquiry into missing and murdered Indigenous women. Two commissioners, as well as a staff member, were in attendance for the vigil.

“For this to work, we need to stand united – give it a chance. We have to stop tearing everything apart before it begins,” she said.

“We take too much time to look for the bad in every situation. In something like this, there are so many families that are hurting, that are suffering. We need this to work so that something can change – not everything can be addressed in this inquiry, it’s a given. But we need to get as much as we can done so that they can make a difference at the end of this.”