The only photo Chester Gilbert has of his father Albert was taken while the father-son duo worked together on the IBM Building in New York City.

Like many Kahnawa’kehró:non, Albert, who passed away in 1997 of Alzheimer’s disease, spent his life ironworking.

During the summer of 1985, he and his son were a part of the crew building the 603-feet skyscraper at 590 Madison Avenue.

“I had just come back from California, finished my apprenticeship and decided to go work in New York and lo and behold, I get dispatched to a job and he’s on there,” said Chester.

“It was good to be working with him and other guys from Kahnawake for the first time. It was also a first time to see New York ironworking-methods than the stuff I was used to out west. But, all-in-all, it was just a high raise, nothing too special.”

Despite it being “just another job,” Chester recalled the day he snapped the photo of his father standing in the corner of two beams.

“We drove in Sunday night, and normally Monday lunchtime, everybody from Kahnawake just sleeps because you’ve been driving all night. I kind of woke him up said ‘dad, go in the corner there, let me take your picture,’” he said.

A few more photos were snapped of himself walking on one of the beams that same day.

“I took my camera to work that day. That was the first selfie in 1985. I put my camera on the iron, I put it on a timer and walked back,” said Chester.

The IBM Building was the first job Chester worked on in New York, after spending six years in California as an ironworker building high-rise buildings in the financial district of San Francisco.

It’s where he “accidentally” entered the trade after helping his uncle Robert Diabo drive a car to the sunshine state.

“I went to California to be a beach bum,” he laughed. “He was going to work, asked me to stick around, and was going to try to get me on as a labourer.” 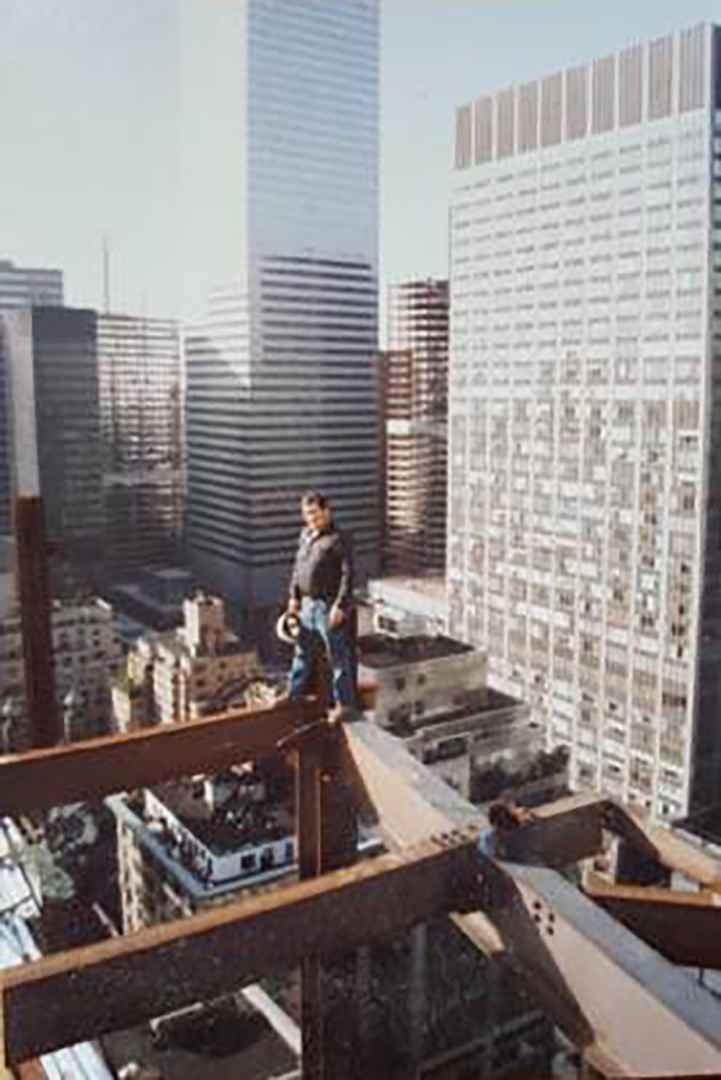 The next day, he ended up on the jobsite with a permit for bolting up on the high-rise.

“They gave me a hardhat, belt and some tools. My uncle gave me a few tips on how to do the work, but it really was a test for me. My first day was 17 floors up in the air, and I made a promise if I could make it to lunch time, it was the kind of work that I would do,” he said.

Today, he’s one of the 20 Kahnawa’kehró:non working on the New Champlain Bridge Corridor Project. His son, Hogan, will soon enter the trade as well, following the completion of the ironworker course at the Centre de formation des métiers de l’acier in Montreal.

“I’m very glad for him,” said Chester. “I seen a lot of guys his age or younger, I was kind of mentoring them, teaching them some of the old tricks. I always wished that it would have been some kids from Kahnawake that were around. I know my father did that for guys a little bit older than me.”

The program, which is expected to wrap up in August, was an initiative by the Mohawk Council of Kahnawake and Tewatohnhi’saktha as a part of their workforce inclusion plan to get more local ironworkers on the new Champlain Bridge.

Even though that’s where his father is currently working, Hogan said he has his eyes set on being New York City-bound for his apprenticeship.

“That’s where the big money is and it’s the hardest apprenticeship to get into. The cream of the crop!” said Hogan.

The 27-year-old said he decided to apply for the program after being tired of working dead-end jobs.

“I was tired of serving, working in bars and feeling stuck. The real motivation came when the NYC ironworkers local put out a call for apprentices. I was on the fence because the final day to apply landed on the morning after one of my bar shifts. By the end of the shift I decided ‘screw it, I’m going’ and drove straight down without any sleep,” he said.

“Keeping the tradition alive was a big part of it. I’ll be the fourth generation in my family to be an ironworker.

Hogan said looking at photos like the two taken of his father and grandfather make him excited and nervous to carry on the family tradition.

“It makes me very proud to come from good honest hardworking men. I like learning new things and I like working with my body and my hands. Knowing that they did it and did it well gives me confidence to be the best I can be,” he said.