You are here
Home > News > Dredging the water and creating flow

It’s a plan years in the making, and it’s one that the Kahnawake Environmental Protection Office (KEPO) is keen to see completed, so Recreation Bay is transformed and can be used by more community members wanting to enjoy the water.

KEPO’s goals are three-fold: to create more flow through the bay, reduce sediment and give a facelift on the shore.

The office held an information and feedback session where 14 community members showed up and gave their thoughts on the project and potential improvements. As part of the event, attendees filled out surveys aimed at gauging their use of the bay, ideas for improvement, and what they think of KEPO’s plan.

KEPO consultant Patrick Ragaz took The Eastern Door through the presentation and explained the issues with the area, and possible ways to improve the area.

The water once flowed naturally and quickly alongside the St. Lawrence River.

The seaway’s construction, altered that forever.

“Essentially, before you had a fast-flowing river and then this (the seaway) cut that off entirely,” said Ragaz.

To repair the damage done by the seaway, KEPO’s plan is to increase the flow from around 125 cubic metres per second to 180, remove the plants from the bottom and dredge a channel through the length of the water.

Removing the plants would remove a barrier to flow in addition to halt the accumulation of nutrient-rich sediment that falls to the bottom of the channel, causing further rapid plant growth.

Removing the plants is the first step, and would come with a price tag from between $4,000 (cutting the weeds) to around $70,000 to completely harvest them.

“Because it’s not a natural system, those removals are going to have to take place on an ongoing basis,” said Ragaz, adding plants will need to be removed twice a year initially. “We may start to reduce the frequency as we go along because as we start taking out those plants that are picking up the nutrients, if you’re taking them out of the system, those nutrients are gone from the system, so eventually they’ll start slowing down the growth rate.”

Ragaz mentioned that KEPO will launch a pilot project in the summer to remove some plants in the bay using a number of different methods to see what works best.

Ragaz said the St. Lawrence Seaway Authority is agreeable to increasing the flow to around 180 cubic metres per second, at the Ste. Catherine Lock, which would help with the second part of the plan.

The third part, dredging a 40 metre wide channel through the bay, would come with a hefty price tag around $700,000 and KEPO is currently working on finding funding partners to implement the plan.

If successful, flow should improve dramatically, and the solution is meant to be long-term.

“We’re hoping to maximize the flow and sediment movement as much as possible, so that we can limit maintenance,” said Ragaz, who added another intervention may be needed in around 30 years. “The costs associated with it are quite high.” 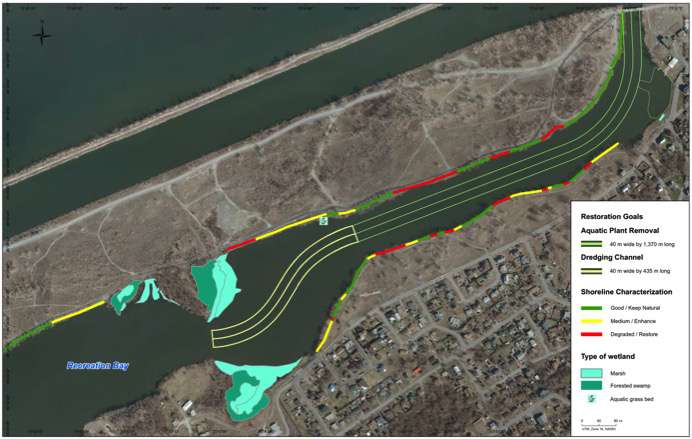 Kateri Tekakwitha Island is another target for rehabilitation as part of the project.

KEPO’s plan is to rehabilitate the shores, improve wetland areas, and cut down on invasive species.

“Currently there’s an unlimited number of fire pits, and random access points. It’s a bit dangerous now because of the approach there’s just that rip rap barrier all the way along.”

Rip rap stone is the excavated material dumped along the shore during seaway construction.

The plan is to use that stone and landscape the shore and into the island.

In addition, the dredged nutrient-rich soil will be suitable for topsoil use, and KEPO has ideas on how to use it.

“Basically, you’re left with a great topsoil that we’re proposing to spread on the island to create some topographical relief, do some plantings, and enhancing our butterfly project that we’re working on there,” said Ragaz.

Several other ideas such as a turtle beach, a stream on the island, an improvement around storm drain mouths and designated fire pit area were part of the presentation, and community members are encouraged to offer suggestions on what they would like to see done on the island.

Those wanting more information on the presentation given Wednesday or the plans for the coming months, can visit the environment office located at the Lands Unit building near Kateri School.

In the end, KEPO wants the area to be more useful for community members, particularly during the summer.

“The main goals are to help the community reconnect with that area, access the river, paddle in the bay, fishing and so forth, as well as to enhance the environment,” said Ragaz. “We’re not trying to recreate what was there before the seaway obviously, but we’re trying to use what’s there now.”