Jesse Lahache Jr. and his Peewee AAA Arsenal Releve enter today’s action 1-1 after a heart-breaking shootout loss in game two of the Dodge Cup. Lahache Jr. was between the pipes for the team’s opening game win. (Daniel J. Rowe, The Eastern Door)

The next generation of star hockey players from Kahnawake laced up for the toughest test of their quality this week as the Dodge Cup Provincial Championships got underway for the double and triple letter teams of the minor systems.

Lahache Jr. took no time to show his quality for the Lac St. Louis Peewee AAA Arsenal Releve that won 3-2 to open the tournament.

Lahache Jr. saved a penalty shot, and stayed cool through a flurry of action in the final three minutes as the Richelieu Dynamiques came with a vengeance after giving up a late goal to break the tie.

A goal fluttered past Lahache Jr. that would have made it a 3-3 game, but the officials called the goal off due to a high stick.

In the eye of the storm, facing an onslaught, Lahache Jr. had some words of wisdom for goalies facing that kind of pressure.

“Try harder and don’t let in another weak goal,” he said. “Don’t lose an edge, and keep in position.”

The Releve played last night  with Xavier Roy taking over the duties between the pipes, and lost in a heart-breaking shootout to drop game number two. The Arsenal Releve play today at noon at the Roderique Gilbert Arena on the island of Montreal.

Next up: Jayce Delaronde and Trey Deere.

The team MVP forward, Deere, and top d-man, Delaronde, let the Peewee AAA Arsenal into action yesterday against the Pointe Levy Corsaires yesterday afternoon at the Chaumont Arena in Anjou on the island of Montreal.

Deere scored twice and added an assist but it wasn’t enough as the Corsaires won 4-3.

The Arsenal have a chance to bounce back today against the Laval Patriots at 2:30 p.m. at the Chaumont Arena. 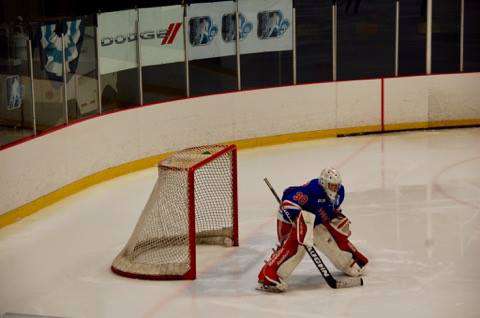 The oldest of the local stars represented at the Dodge Cup is Thomas Dailleboust, who led the Midget Espoir Arsenal from between the pipes Wednesday night against the Mauricie Estacades.

Dailleboust played stellar through two periods, but after some concerted pressure early in the third, let two past him. The Arsenal forwards could not find a way past Antoine Lyonnais, and the game remained 2-0.

Backup goalie Zachery Grant played last night for the Arsenal, and won 2-1 over Richelieu, and Dailleboust should be back between the pipes tonight when the Arsenal play the Abitibi-Temis Citadelles at 7 p.m.

Action in all levels continues throughout the weekend.