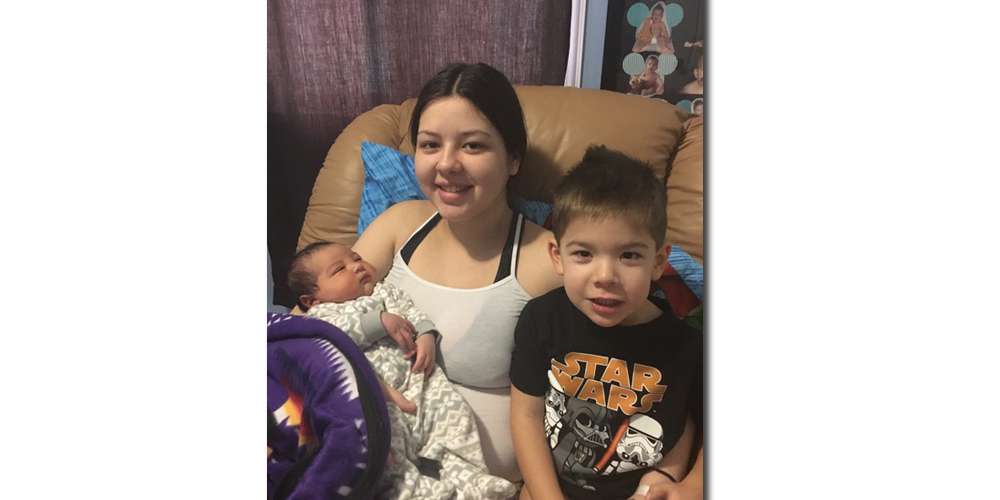 Kase Kevin Paul came into this world on January 10 to become the first Kahnawa’kehró:non baby of 2017, a day after nearly becoming a surprise guest at his mother Kyra’s birthday party.

Kyra Paul had been out at a restaurant celebrating with family and friends on the ninth; with timing right out of a movie. Her contractions kicked in just as everyone finished singing “Happy Birthday.”

After 12 hours in labour, both mother and child were safe and inseparable.

“He’s just so amazing,” Paul told The Eastern Door, on the phone from Anna Laberge Hospital in Chateauguay. “I never want to give him up even when people want to hold him!”

It’s familiar turf for Paul, even though she was too young to remember. She was the first baby of the year in Kahnawake back in 2000. Though she loves the coincidence, the 17-year-old admits not everyone was thrilled when she broke the news that she was pregnant at her age.

“Some people were upset and some were kinda happy,” said Paul. “But like within a few weeks, everyone was excited.”

Her supportive family is what kept her going, she says. Her grandmother is a midwife who lives in Tyendinaga; when news of Kyra’s contractions got out, her Tóta hopped in the car and made a beeline for Kahnawake.

She spent the next few hours coaching Kyra through and at-times rough labour. At one point, Kyra’s pain was so severe that she could feel it even though she’d had two epidurals. She thought something was wrong.

“I started to cry, because I got scared,” she said. But then her life changed in a moment, when she held her baby boy in her arms for the first time. “Once he was on my chest, I forgot about all the pain I was in.”

At 33, Kyra’s mother Kara is a first-time grandmother. Though she doesn’t shy away from the title, she does put her own twist on it.

“I’m a ‘glam-ma’,” she says with a big laugh. “It doesn’t change anything really. We have a wonderful addition to our family.”

Kara knows all too well the challenges Kyra will face as a young single mother raising a child. Kara herself gave birth at 16, but rather than let it be a burden, Kara says motherhood at that age was a blessing.

“Having a child should motivate you to realize your dreams, because you’re living for your child as well,” Kara said, speaking from her daughter’s hospital room bedside.

Though Kyra is still trying to decide on a Kanien’kéha name for Kase, she’s sure about one thing: he is the spitting image of her deceased, beloved bubba, Angus (Sweeny) Two-Axe. She plans to bring Kase up to respect and honour the culture.

“I would like to get him named in the Longhouse, just so he can have his own name,” Paul said. “I’m going to show him our songs and dances, and bring him to the powwow.”

For now, Kyra is looking to the future instead of the past. Her voice is full of determination as she talks about her plans to go back to her day job at Lafleur’s Golf Club when she can, as well as finishing high school.

She wants to become a nurse and is committed to striking the right work-life balance by being a good mom for Kase.

“I’m a little nervous, but I believe in myself that I can do it.”