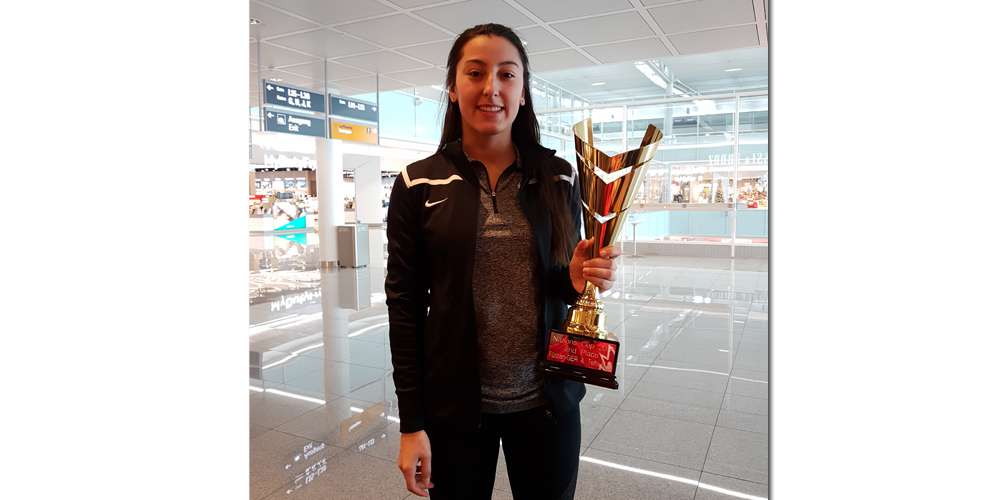 Brooke Stacey of Kahnawake with the second place trophy she helped Team Canada earn at the Nations Cup in Germany. (Courtesy Tina MacComber)

The first thing Tina McComber thought when she found out that her daughter Brooke Stacey was being called up to play for Canada’s Development Team at the Nations Cup was about a lost Christmas vacation with the family to Cuba.

“Brooke being named to the development team came as a shock,” McComber said.  “When she was let go from the training camp in Calgary in August, I guess it was over. It was, okay try again next year and see what happens.”

But all that changed in one email from Brooke, who is 20, to her mother.

Tina had just finished up a workout and was in the locker room when she read her email.

“I was screaming in the bathroom and all my friends, there were all like ‘Tina what happened?’”

After coming down from the high, Tina realized she and her husband Sean Stacey had to be in Germany for the Nations Cup. Problem is, the entire family, including Brooke and her brother and sister were scheduled for a vacation on the beach.

“I said ‘Brooke this is once in a lifetime, you don’t always get called up to Team Canada,’” McComber said.

It wasn’t a difficult choice for Brooke to pack her equipment from the University of Maine and head to Germany, instead of packing a bathing suit for the beach.

“Having both my parents there was great, they support me every day and every step I’ve taken this far,” Stacey said. I definitely couldn’t have done it without them, they are pretty great.”

Stacey’s siblings still made it to Cuba.

In Germany, Team Canada got a wakeup call just before play began when they dropped an exhibition game to the host team.

But they bounced back and won their first three games (including avenging the loss to Germany with a 5-1 win) to make it to the gold medal final.

There Brooke and her teammates dropped a 1-0 heartbreaker to Finland, coming away with the silver medal.

“Winning silver wasn’t the greatest feeling, as it feels like losing gold,” Stacey said. “Winning a medal in general is great but not the end result any of us wanted.”

For Stacey, the chance to compete with some of the best players in the world helped to elevate her game.

“I think it made me more confident on the ice, for sure,” Stacey said. “I had practice today (Wednesday) and felt the confidence in me. I believe this is from being able to experience such a high level of hockey with amazing hockey players.”

Stacey did not register a point in the tournament, but she saw a lot of ice time, especially in a checking role.

“I am pretty satisfied with my game play over the past 10 days,” Stacey said. “An area I thought I did well on was consistency. I went into every game playing the game I know how to play. I also was satisfied with how I played PK (penalty kill). Something I would have liked to improve was my patience with the puck.”

Stacey has come a long way from the days of first lacing up the skates in high school, according to her mom.

“I never imagined. It was never a thought even as we were putting her through hockey, it was just something she liked,” McComber said. “Team Canada was only a thought as she went through OHA (Ontario Hockey Academy in Cornwall).”

But now Stacey sees herself playing beyond her time at Maine, at least for a short while. She still has one-and-a-half seasons left with the Black Bears before graduating with a degree in Sociology with a concentration in criminology.

“Long term I hope to play for an extra year after university, probably in Europe somewhere,” Stacey said.