(From left to right) George Jacobs, Chaz Norton, Shako Rice, Carter Snow, Tehowenoron Diabo and the Double B boys of Atom admit they have some work to do to get their first win in the faster, more skilled level of minor hockey. (Daniel J. Rowe, The Eastern Door)

Tomorrow, the Kahnawake Mohawks Atom BB hockey team skates onto the rink in Kirkland to take on the Lakeshore Tigers. The Mohawks remain in the hunt for win number one, as the team is trying to keep up with the faster pace that is double-letter hockey this season.

Kahnawake was required to put together a double-B team this year after Hockey Quebec rejigged its system to create more elite teams in the region.

Coach Curtis Diabo is leading the crew of talented nine and 10-year-olds, and has seen them improve since the season began.

He sees both sides of having a team of this calibre in town.

“It has its advantages and disadvantages,” said Diabo. “It pushes the kids to work harder, but at the same time, they don’t win many games when they’re still working hard.”

The change in the system affected clubs in all minor hockey associations in the Suroit region, including Mercier, Ste. Martine and Chateauguay.

Chateauguay now has double-A teams from Atom to Midget. Kahnawake was supposed to have a double-B team in Atom and Peewee, but the Peewee team did not happen due to lack of numbers.

Adjusting to the higher level meant one thing for the young players and coaches: work.

“We had to work on everything that they didn’t learn from MAGH and up; pretty much everything,” said Diabo, who was also required to up his coaching level by taking a higher coaching course.

Kahnawake lost its 12th game in 12 on the weekend, 7-3 to the Trois Lacs Aigles, in a decent performance.

Bocephus Dailleboust played Atom B last season, and scored twice on the weekend’s game. He spoke about playing at a higher level this year.

“It’s a big change,” said the 10-year-old sniper, who now has five goals on the season. “Atom BB is way faster.”

Goalie Chaz Norton remains upbeat, though his team has not yet won a game. He, along with fellow netminder Ashton Stalk, is learning how to face the better shooters of double-B.

From his place between the pipes, Norton has noticed his team is started to improve particularly from the back.

Defenceman Shako Rice agreed, and is working on ways to keep up with the faster-paced game. 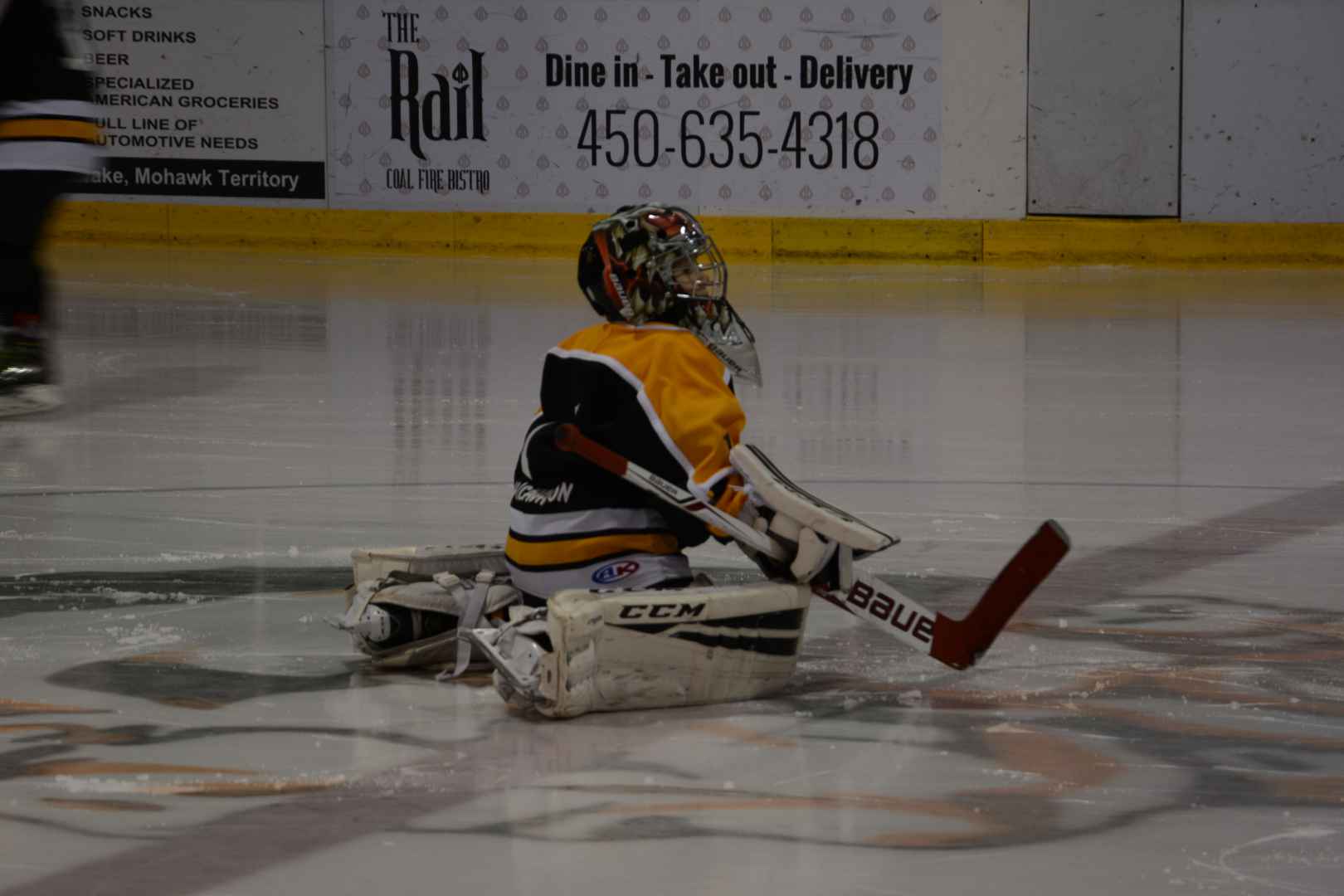 Goalies like Ashton Stalk need to deal with sharp shooters and speed skaters of the double-letter level. Coach Curtis Diabo sees it both ways. Having a double-letter team in town gives players something to strive for, but it’s also tough competition, and nabbing a win is no easy task. (Daniel J. Rowe, The Eastern Door)

“We’re getting really good at defence,” said Rice. “(We have to) back up and block the shots.”

Jacobs has been working at home on one skill that he said has had some effect.

Diabo knows Kahnawake has the talent to compete at the elite level, but also feels players need to start training earlier moving forward.

“We do, but, at the same time, it’s got to come all the way from the bottom up, and not just once they get here,” he said. “The things that we’re doing now they should have learned over their first two years of Novice.”

Dailleboust knows his team can eke out a win if they keep their composure for the full 60 minutes.

“Sometimes we have a good game in the first period, and we play in the second period and we’re good, and then the third period we kind of give up,” said Dailleboust.

Rice added one more thing the team needs to do every game.