Kahionwinehshon Phillips and Survival School students added their voices in support of the Standing Rock Sioux community in North Dakota that is fighting to stop the Dakota Access Pipeline from encroaching through its territory, and handed flyers to passing motorists. (Daniel J. Rowe, The Eastern Door)

Saturday night, Merit Cross was speaking with her daughter about doing something on Tuesday for the national day of action across Canada and the U.S. in support of the Standing Rock Sioux community and its supporters seeking to block the Dakota Access Pipeline.

“I said, ‘we got to do something,’ and it just went from there,” said Cross Tuesday standing on the side of Highway 132 with around 200 Kahnawake Survival School students and other supporters from the community.

Cross contacted KSS, and organized for students to be allowed to join the protest.

Cross had originally envisioned a line of protesters from the Blackberries intersection all the way to Survival School.

“But of course, everybody works, but we got a great turn out,” she said.

At 10:30 a.m., the students and supporters crossed Highway 132, held signs in support of Standing Rock and blocked traffic for about five minutes before posing for a group photo atop the hill beside the Depot Road.

Kawehnoke (who preferred to use just his Kanien’kéha name) is in grade nine at KSS, and held a sign that read, “Water is Sacred. No Pipelines.”

“Part of it is because I feel it’s a very important thing to do with the community, and it’s good to show that I care,” said the 15-year-old.

Kawehnoke considers protecting water of extreme importance regardless of your nationality or religion.

“It’s not just an Indigenous issue. It’s more of a world issue,” he said. “It doesn’t matter what you believe in. In all beliefs, they all have something to do with water. Even if you’re an atheist, you believe in science. No matter what, water is life, and it’s really important for all of us to protect it.”

Timmy Montour’s high school days are well behind him, and he walked in the middle of the group inspired to see the youth of Kahnawake engage with the issue.

“It’s an awesome thing today that everyone’s coming together in every group in town,” said Montour. “I like to see this because our youth are learning what my generation didn’t know about all this stuff. It’s good that these young people will keep on the fight for right.”

The lessons students are learning, for Montour, are ones that need to be learned.

“They’re learning that water is precious and to stand up for their rights,” said Montour. “A lot of people have not done that in the past, and more and more are coming out.”

An added positive for Montour was the constant sound of horns being honked in support of the protest from drivers passing on the highway.

“That’s really encouraging,” said Montour. “In cases like this it’s usually the other way around because they don’t know what’s going on. This time, they’ve been made more aware and it’s been done peaceful.”

Supporters handed out flyers with the headline “Kahnawake Stands With Standing Rock” at the intersection to motorists, who waited patiently at the lights.

“The Sioux people at Standing Rock have deep concerns that this pipeline could potentially spill into the Missouri River and its tributaries and poison their water supply, in addition to destroying grave sites and sacred areas,” the flyer reads. “North Dakota has responded by mobilizing its National Guard and have militarized its police to violently suppress any opposition against the pipeline. The conflict is ongoing.”

The flyers included the websites www.ocetisakowincamp.org, www.sacredstonecamp.org and www.nodaplsolidarity.org where more information on the protest can be found. 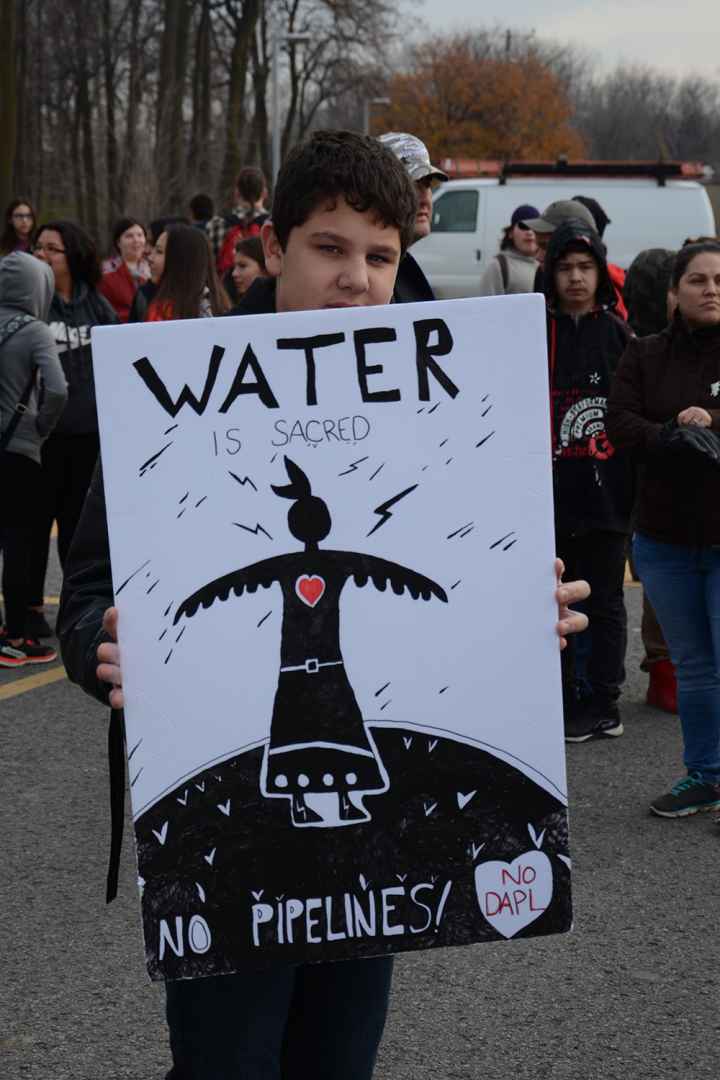 In addition, the flyer included the addresses and phone numbers of US president Barack Obama and North Dakota Governor Jack Dalrymple.

Kahionwinehshon Phillips, dressed in a ribbon shirt, was one such supporter handing out flyers to commuters.

“We’re all slowly coming together, so to see everyone out here together is awesome, it’s a really good feeling,” said Phillips, who went to KSS. “It feels awesome to know that our younger generation will stand up for our rights and know what we’re supposed to do, it’s a real good feeling.”

Kawehnoke had a word for those that favour industry and commerce over protecting the land.

“I find it kind of strange that people will do whatever they have to to get their money when the reality is that you already have so much. Why do you need more? And why do you need to destroy creation to do it?” he said.